It’s Not About the Machines

Writing in the New York Times last week, Erik Brynjolfsson and Andrew McAfee argue that “a wonderful ride” began to unravel in the late 1990s when employment growth became “decoupled” from productivity growth.

Their contention is that something fundamental has changed in the economy over the past decade, illustrated in the following graph by the increasing gap between gains in productivity and employment, described ominously as the “jaws of the snake.”

A closer look at the data shows, however, that the “jaws of the snake” have been open for more than 30 years. More fundamentally, rather than a “great decoupling” between trends in employment and productivity, it is clear that productivity and employment have been diverging for a very long time as the composition of the economy has changed. 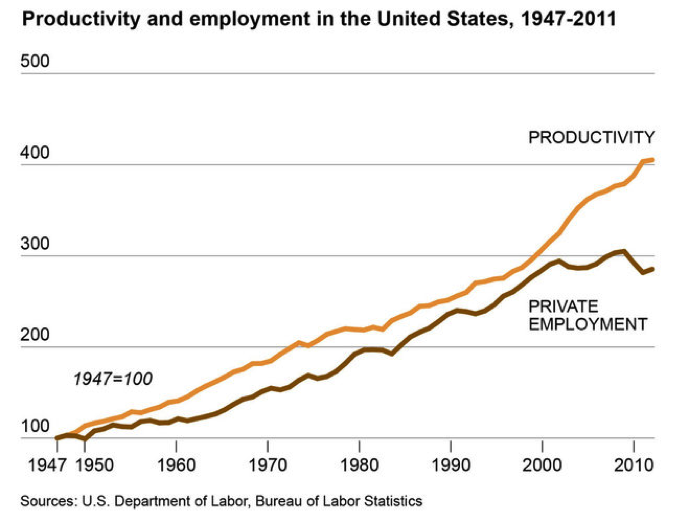 Brynjolfsson and McAfee point to tax and policy changes and the effects of globalization as key factors in the continuing growth in productivity, which has continued as jobs have not grown as fast. However, their main point is to echo the theme of their recent book, Race Against the Machine (2012), and argue that “technological progress” in the form “digital labor,” which “substitutes for human labor,” is “another driver of the ‘Great Decoupling’.”

Unfortunately, the data that they use to illustrate productivity growth is not well suited for telling us much about the influence of technological change on productivity. When a more appropriate metric is used — what economists call total factor productivity (e.g., see here in PDF) — we see that what Brynjolfsson and McAfee call the “great decoupling” actually took place around 1980.

The first thing I did was to replicate their graph, shown below, and which uses data on labor productivity in the non-farm business sector and private employment, both from the Bureau of Labor Statistics. 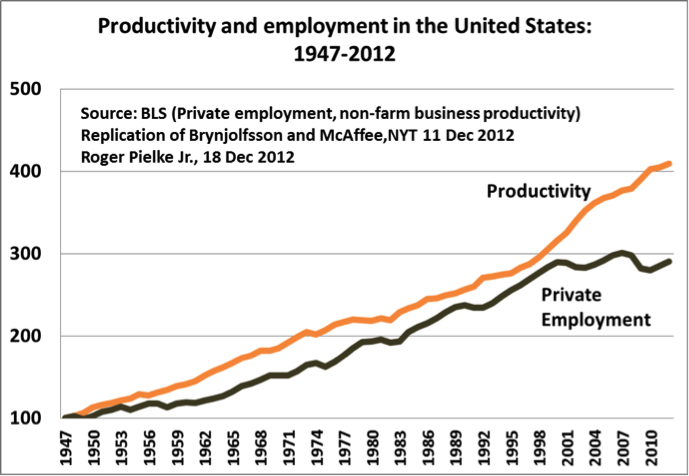 With the data in hand, let’s take a quick step back be clear about what we are discussing. Back in 2009, The Economist offered a helpful summary of what is meant by the concept of “productivity”:

Productivity growth is perhaps the single most important gauge of an economy's health. Nothing matters more for long-term living standards than improvements in the efficiency with which an economy combines capital and labor. Unfortunately, productivity growth is itself often inefficiently measured. Most analysts focus on labor productivity, which is usually calculated by dividing total output by the number of workers, or the number of hours worked.

Labor productivity can grow for several reasons, including technological change, quality of the labor force and greater capital investments (or more broadly, what economists call “capital deepening”). Because these factors are all mixed together it is problematic to associate increases in labor productivity with the consequences of technological innovation, as Brynjolfsson and McAffee have done.

Fortunately, there is a better metric of productivity to use for the purpose of identifying the effects of technological change on the economy’s output – total factor productivity (TFP) – which The Economist describes as follows:

[Total Factor Productivity] tries to assess the efficiency with which both capital and labor are used. Once a country's labor force stops growing and an increasing capital stock causes the return on new investment to decline, TFP becomes the main source of future economic growth. Unfortunately TFP is much harder to measure than labor productivity. It is calculated as the percentage increase in output that is not accounted for by changes in the volume of inputs of capital and labor. So if the capital stock and the workforce both rise by 2% and output rises by 3%, TFP goes up by 1%.

In principle, TFP offers a measurement of productivity that should be more closely tied to the influence of technological change on economic output. John Fernald of the Federal Reserve Bank of San Francisco recently published a time series of TFP for the US economy (here in PDF). What happens when we substitute TFP for labor productivity as used by Brynjolfsson and McAfee? 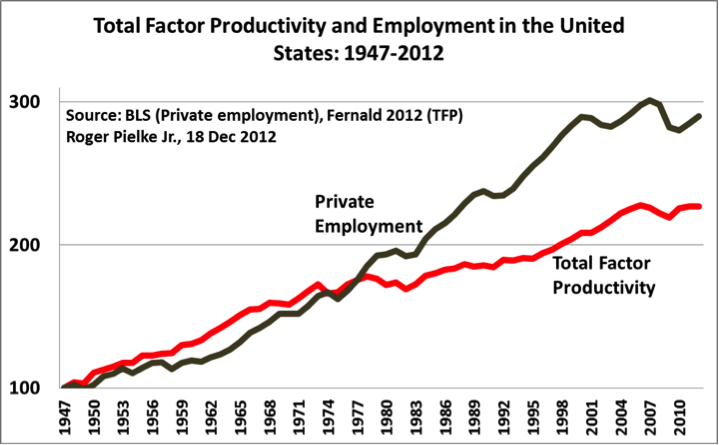 What we see in the graph above is that private employment and TFP grew at the same rate for about 3 decades after 1947, at which point growth in employment outpaced TFP ever since.

What happened in the economy in 1979? For one thing, the United States hit its “peak manufacturing” employment (in June, 1979) at just over 19.5 million people. However, the crossing of the curves in the graphs above indicates not a sudden change, but rather reflects a fundamental, long-term change in the composition of the US economy.

In manufacturing, as occurred in agriculture, technological change has indeed led to much greater production for much less labor. However, employment has continued to grow in other sectors of the economy, especially in services where increases in productivity are not as readily amenable to technological innovation.

The continuing increase in labor productivity during the recent recession actually had almost nothing to do with technological innovation, as Fernald (2012, PDF) explains:

In a growth-accounting sense, the divergence between the sharp TFP decline and the less pronounced decline in labor productivity reflected a surge in capital deepening (especially of structures) and labor quality. Both of these countervailing factors primarily reflect the depth of the recession itself: plunging hours (which raised the capital-labor ratio) and disproportionate job loss by low-skilled workers (which raised the average quality of the labor force).

So when we look into the “jaws of the snake” it is not the perverse consequences of rapid technological change on the economy, an influence which Brynjolfsson and McAfee implies that “we also need to start preparing for a technology-fueled economy that’s ever-more productive, but that just might not need a great deal of human labor.”

To the contrary, an analysis with more appropriate data suggests that the rise of the machines is not the main reason for our current economic challenges, and a world where labor is less needed is not yet upon us.