Taking on the Three Deficits: An Investment Guide to American Renewal

A new report was released this week from authors at the Breakthrough Institute and the Information Technology and Innovation Foundation (ITIF). The report, "Taking on the Three Deficits: An Investment Guide to American Renewal," acknowledges the threat not just of America's budget deficit, but its trade and investment deficits as well. The cumulative effect represents a profound existential challenge to the United States, and the authors of this new report offer a pragmatic policy framework for America to emerge as a global leader in the 21st century.

America faces three cumulative deficits, each of which must be addressed to ensure continued economic prosperity:

The Budget Deficit is the difference between federal revenues and spending. The budget deficit for FY2011 stands at over $1.2 trillion, and the cumulative national debt will reach $10.4 trillion this year. The debt may rise to more than $18.3 trillion by 2021, according to Congressional Budget Office (CBO) estimates.

The Investment Deficit is the shortfall of investments in scientific research, education, productive infrastructure, and new technologies that are needed to maintain our current standard of living and provide a critical foundation for long-term economic prosperity. These investments drive economic growth by accelerating innovation and boosting productivity, yielding positive returns on investment for the entire economy. Yet public investment in these building blocks of national prosperity has declined for decades, leading to stagnating growth and a widening investment deficit that may increase to over $5 trillion in the next decade.

Overall, America's three deficits total almost $21 trillion and are projected to grow to over $41 trillion in 10 years. The budget deficit alone makes up less than half of the total combined deficit, and both future economic growth and government revenues are influenced by the magnitude of the trade and investment deficits. Thus, addressing all three growing deficits is critically important to ensuring continued economic prosperity. 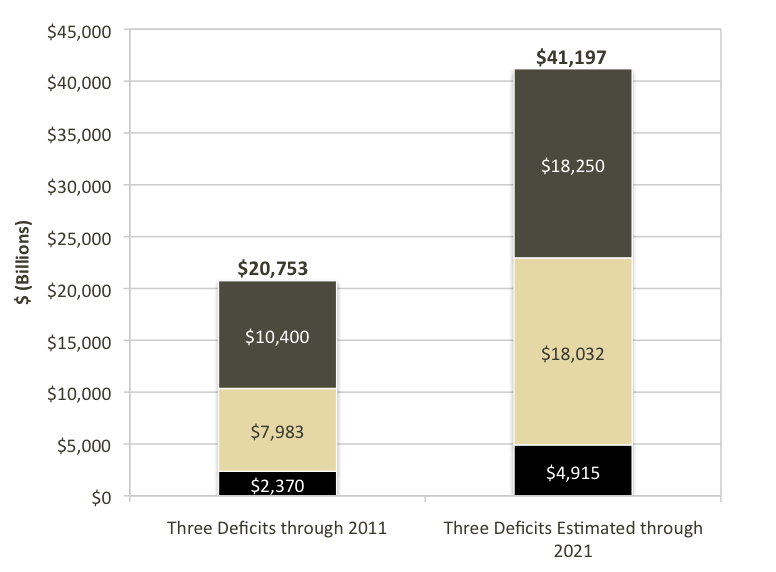 Figure 1: Estimate of America's three deficits in 2011 and 2021 projection

Right Way and the Wrong Way to Close the Three Deficits

Most policymakers in the budget debate are ignoring the trade and investment deficits, and as a result risk making all three deficits worse. The predominant approach in Washington is to "put everything on the table" and pursue across-the-board budget cuts to reduce the level of public spending. Such a strategy makes policymakers appear bold in their approach to the national debt, but would actually be counterproductive, since it would simply transfer some financial debt to investment or trade debt. Take, for instance, the impact of a 10 percent cut in funding for research and development spending over the next 10 years. This would nominally reduce the budget deficit by $150 billion over 10 years, but would increase the investment deficit by the same amount. Moreover, it would actually increase the trade deficit as well, by slowing the pace of innovation and making U.S. exporters less competitive. In turn, both factors in turn would reduce economic growth, ultimately leading to a higher budget deficit.

Instead of focusing solely on the budget deficit, Congress should take a more nuanced approach to budget cutting that addresses the budget deficit while simultaneously reducing the investment and trade deficits. The only way to do this is to increase targeted investments that spur innovation, productivity, and competitiveness while cutting budgets elsewhere. Increasing these productive public investments will close the investment deficit, boost U.S. competitiveness and exports, and generate higher economic growth, which is the single best way to close the budget deficit. The CBO estimates that an increase of just 0.1 percent in the GDP growth rate could reduce the budget deficit by as much as $310 billion cumulatively over the next decade. For example, an increase in the real rate of GDP growth from the CBO projection of 2.8 percent over the next decade to 4 percent--the U.S. growth rate from 1993 to 2000--would, all else equal, cut the cumulative budget deficit in half, or by $6.8 trillion, over the next decade. Indeed, gaining control over the nation's debt without an increase in economic growth and therefore tax revenues will be extremely difficult, if not impossible.

The challenge, then, is to identify those programs that spur innovation, productivity, and competitiveness, and therefore drive economic growth and competitiveness. In particular, policymakers should distinguish between productive investments--expenditures that expand the productive capacity of the country, drive economic growth, and increase future incomes--and consumptive spending--government expenditures that finance present consumption of goods and services.

This critical distinction is often lost on both sides of today's budget negotiations. Many on the left do not distinguish between the two, either because they are unconcerned about the budget deficit or because they believe spending and investment have the same economic impact. Many on the right paint all federal investments as "spending" that should be cut, even though investments like scientific research yield large returns for both society and the federal treasury that other spending, including subsidies to farmers and oil companies, do not. There is a similar lack of clarity on tax policy, with some on the left opposed to more tax cuts for businesses and some on the right in favor of any and all tax cuts, regardless of merit. The truth is that some tax expenditures, like the ethanol tax credit, are wasteful and do not increase productivity or growth, while tax incentives, like the R&D tax credit, encourage activities that foster growth, innovation, and job creation.

Furthermore, policymakers from both the left and right limit their framing of the federal budget to either discretionary or non-discretionary programs. The fact is, the entire federal budget consists of government expenditures. The key difference between programs should really be whether a program is considered consumptive spending or productive investment, not whether the expenditure is mandatory or not. Breaking from this old framing would create a more robust and effective budget policy debate.

Productive public investments will help reduce the three deficits and should be strengthened, while consumptive spending will likely add to the three deficits and could more justifiably be cut. Some consumptive spending programs may still be important, but each should be judged on their own merits. In general, targeted cuts could be made to consumptive spending to reduce the budget deficit without exacerbating the other two deficits. Meanwhile, agencies, programs, and policies with some connection to productive investments--e.g., R&D, education, and infrastructure programs and policies--collectively take up a relatively small portion of the budget picture--likely less than 10 percent of all expenditures. Increasing high-impact productive investments, including pro-growth tax expenditures, can therefore be accomplished without adding significantly to short-term debt, while generating economic returns that reduce all three deficits over the medium to long term.

To distinguish between investment and spending, policymakers should consider three criteria:

1. Innovation. Does the program or policy help spur innovation to create new products, processes, technologies, or knowledge that in turn adds value or creates new industries?

2. Productivity. Does the program or policy increase the productivity of organizations and the economy as a whole?

By using these three metrics as a guide, policymakers can make better budget decisions that spur economic growth and simultaneously close all three deficits, even as they cut spending elsewhere in the budget. By increasing productive public investments to spur innovation, productivity, and competitiveness, America can begin closing its three deficits and once again become the most competitive and innovative nation in the world.

Devon works for Google's Global Energy Market team. He was a Project Director at Breakthrough, 2009-2012.