The War on Ivory

Although the trade of ivory from elephant tusks has been banned by international convention since 1989, demand for the “white gold” continues in countries like China, where ivory carvings and jewelry are coveted status symbols. As the leading consumer of elephant ivory, Chinese demand is driving the poaching of over 30,000 elephants a year in Africa.

Since a third of the elephant’s tusk is embedded in its head, poachers kill the animals in order to harvest the ivory. Unfortunately, many Chinese consumers do not realize this. A 2007 survey led by Grace Ge Gabriel, the Asia Regional Director for the International Fund for Animal Welfare (IFAW) found that 70 percent of Chinese consumers did not know elephants have to die for people to have ivory. Grace has been fighting to increase awareness and eliminate the ivory trade in China for decades. In the following interview, she shares her insights on grey markets, substitution, government collaboration, and why she feels hopeful about the future of wildlife trade in China.

You have done a lot of work on the ivory trade in China, which is driving the poaching of elephants in Africa. Why is there demand for ivory in China?

Ivory carvings have always been coveted as a status symbol in China, but in the past, the elaborate but intricate ivory carvings were the purview of a privileged few. The dramatic increase in consumer power combined with the social interest to define status is driving an exponential rise in the consumption of luxury products such as ivory. Today, market availability of mass-produced ivory trinkets is shifting the consumer appreciation for ivory carvings to ivory as a material.

Biotechnology offers the possibility to create synthetic substitutes that are genetically identical to real ivory. Would adding these products to the market reduce demand for real ivory?

Seeking alternatives to shift demand away is good, but the alternatives have to be completely different from ivory. Putting synthetic ivory “look-alike” products onto the market could create just the opposite effect, for two main reasons: first, the look-alike products would provide cover for the illegal trade of the real thing. Synthetic materials already exist: unscrupulous traders use plastic ivory and even mammoth ivory as a front to cover illegally-sourced elephant ivory. Second, to reduce demand, we need to devalue ivory and stigmatize ivory consumption. Putting ivory look-alike products onto the market reinforces the “necessity” of having it. People who covet it to show off their wealth would want the genuine elephant ivory, and alternative materials would not be worth having for them. Real progress on the ivory trade can only happen with the combination of demand reduction campaigns and government policy all aimed at stigmatizing ivory consumption.

Is the ivory trade legal in China?

The ivory trade has been banned internationally under the Convention on the International Trade in Endangered Species (CITES) since 1989. However, the ivory industry in China successfully petitioned the government to get ivory carving designated as “intangible cultural heritage” by UNESCO. This led to the eventual approval from CITES in 2007 for China to trade limited amounts of ivory.

Has the legal market for ivory been well enforced?

IFAW has been monitoring this market since its inception and, unfortunately, the system is full of loopholes. In 2011, we conducted a market investigation and found that 64 percent of ivory shops and carving factories did not have government-issued licenses. Even among those that did have licenses, the majority were still operating illegally by withholding their ID cards when selling ivory. That way they could use the same ID card again and again. In one of the factories we visited, the manager told us that the government-issued legal ivory only lasted him one month of a year.

In the same survey we found that the ivory price tripled in Chinese currency between 2006 and 2011. And at the same time, Chinese currency gained value against the US dollar. That makes it very lucrative for smugglers who buy illegal ivory overseas and sell it in China under the cover of the legal market. Our partners at the Kenya Wildlife Service said that 95 percent of the people caught in the Nairobi airport smuggling ivory were Chinese citizens.

Has the Chinese government been an active partner in fighting illegal wildlife trade?

In China you couldn’t do anything without collaborating with government, but Chinese government isn’t a monolithic whole. The level of cooperation depends on the individual agencies or officials. It helps that IFAW’s regional office has an all-Chinese staff who understand the social, cultural, and political environment and can work with government departments at all levels (national, provincial, and local).

For instance, as we speak, IFAW is conducting a training workshop for law enforcement officials at China’s border with Vietnam to help detect and interdict wildlife crime. China’s Customs Agency has been really good at increasing inspections and finding out routes where wildlife smuggling is occurring. Thanks to Chinese Customs enforcement, a licensed ivory trader was caught and prosecuted in 2013 for smuggling over seven tons of ivory from Africa in one year alone.

Do most people in China understand where ivory comes from?

In 2007, we ran a survey that found that 70 percent of Chinese people didn’t know elephants are killed to harvest ivory. That was an epiphany for me. I’ve always known where ivory comes from, so I used to wonder: are the Chinese prejudiced against elephants?

In Chinese, the word “ivory” literally translates as “elephant teeth.” So when our survey found that 70 percent of Chinese people don’t know that ivory comes from dead elephants, it’s really genuine ignorance. People think teeth can fall off without the elephant dying. I even had two people on my staff at IFAW who didn’t know that elephants are killed for the ivory. They weren’t ivory consumers, but they didn’t know.

If you raise awareness about where ivory comes from, can you reduce demand?

Our survey was very hopeful because it found that 83 percent of participants would not consume ivory if they had known it comes from dead elephants. That gave us a lot of encouragement to build our campaign. It’s also where we developed the motto: “Mom, I have teeth.” With help from Chinese ad agencies, we put the ad in subways, airports, on buses and trains, magazines, and even phone cards all across the country. 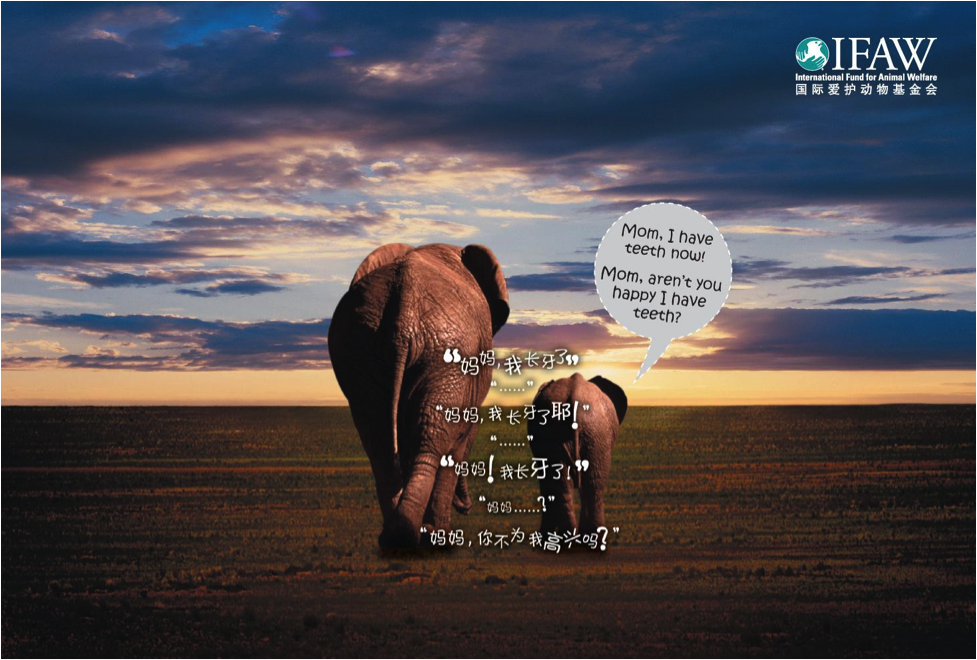 The response was overwhelming. I received two emails in particular that really touched me. One was from an ivory carver who wrote to me to say he didn’t know elephants are killed for ivory and he wouldn’t use it anymore. The other one was from a young woman who was wearing an ivory bracelet the day she saw our ad in the subway. She posted a picture of it on social media and said she was so ashamed. She took the bracelet off and told all her friends not to wear ivory either.

The campaign also resonated with an education official who put it into China’s College Entrance Exam language test, which subsequently reached 9 million applicants.

Do you think the stigma will stick?

After our ad campaign had run for five years, we decided to do an evaluation, and it was really encouraging. The evaluation showed that the ad had been seen by 75 percent of urban Chinese residents. It had also shrunk the group with the highest propensity to purchase ivory from 54 to 26 percent.

I have two other encouraging stories that show that the stigma is starting to stick. In 2012, there was one ivory trader who commuted from a subway station where our ad was displayed. After walking by it day in and day out, it finally touched him. He decided to go clean. He went public, talking to Chinese media about the illegal ivory trade.

One of my staff was at an event recently where a young woman was wearing ivory jewelry and told the group it was something she received as a gift from someone who went to Africa. Several people –– not my staffer, but several other people at the event –– said, “Do you know elephants are killed for that ivory?” She didn’t know. She was trying to show off, but that shut her up.

Some conservationists argue that a limited amount of legal hunting for elephant ivory could meet demand and help support wildlife protection. Is legalization a solution?

Unfortunately, an elephant is really not a widget. If you must call it a resource, it’s a finite resource. Elephants breed so slowly –– it takes 22 months to gestate a baby elephant. There are not enough elephants in the world to meet the rising demand for ivory.

Furthermore, the problem is because China has a legal market for ivory, it removes any stigma attached to ivory consumption. When we do these awareness posters with the government, the message has to be: “Do not engage in illegal trade.” But the issue is, how could the consumer know what’s legal, what’s illegal? A grey market where legal and illegal trades exist in parallel is a criminal’s dream come true. Grey markets not only provide cover for illegal trade, they attract unsuspecting consumers who take market availability for legality.

Do you think China will ever eliminate the legal ivory trade?

I feel hopeful. I really do. Just last Friday I was at the government ivory crush, where a minister announced 10 measures China is going to take to make sure illegal wildlife traders have “no hiding places” in China. One of the points he mentioned that gave me a lot of hope was when he talked about eventually halting commercial ivory trade. Of course, there are still many questions, since there’s no timeline or plan on how to do it, but I have a lot of hope. We’re heading in the right direction.

How did you come to be an advocate against wildlife trade?

In the 1990s I was working for a TV news channel and I had the opportunity to film one of IFAW’s projects in China about bear farming. In China bears are farmed for the bile in their gall bladders, which is used in traditional Chinese medicine. These bears are usually caught from the wild and put in tiny cages for years or even decades, not able to move and with a catheter surgically implanted in their stomach to extract bile.

IFAW persuaded Chinese forestry officials to close down two of the bear farms and release the bears into their care. They set up a bear sanctuary in southern China and I was there filming the opening. I got to see the bears coming out –– some of them had been in cages for so long they forgot the feel of the grass or the smell of soil. That experience touched me very deeply. I felt so appalled by the treatment of the animals by my people (I’m a native of China) that I decided to quit my job and persuaded IFAW’s founder to allow me to open an office in China. Back then IFAW was supporting some projects but didn’t have its own foothold in China.