Recently, Science published a major review of the potential for conservation on farmland, rangelands, forests, and other working lands, authored by Claire Kremen and Adina Merenlender. The latest installation in a long-running debate about the relative merits of conservation approaches ranging from “land sparing” to “land sharing,” the piece presents an alluring vision of landscapes that can deliver not just abundant food and timber, but ecosystem services and biodiversity, all at the same time. However, the piece can only paint this rosy picture by downplaying the very real trade-offs between different functions in a landscape, thus eliding rather than illuminating the challenge of providing food and other goods while also protecting biodiversity.

The landscapes that, according to the review, work for both biodiversity and people feature a combination of agroecological farming methods, agroforestry, and a mosaic of farmland and habitat fragments, all of which allow certain species to persist and traverse the landscape. Applied to all working lands, this combination is thought to not only provide food security and livelihoods but also protect biodiversity. While the piece doesn’t use the term land sharing, there is no better description of its vision, which is presented in stark contrast to a stereotype of conventional farming and the land sparing approach — chemically intensive, large-scale, biologically barren monocultures.

To illustrate this contrast, the piece offers a diagram showing how monoculture row-crops perform on ten environmental and productivity metrics — such as biodiversity, healthy soils, and connectivity — compared to a mixed cultivated, forest, and range landscape. The winner couldn't be more clear. Monocultures only perform well when it comes to crop production. The mixed landscape scores maximum points on virtually all counts. 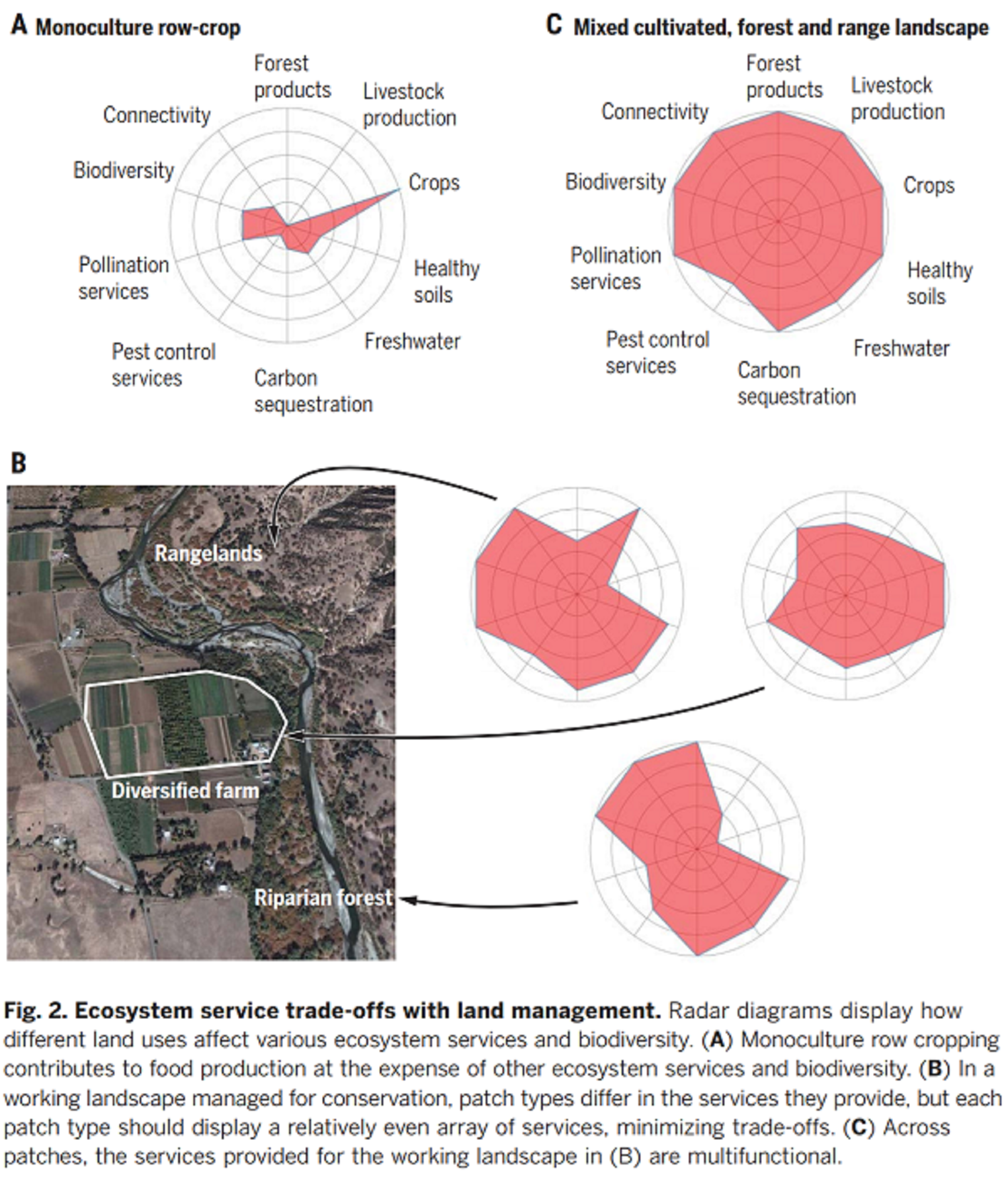 The first problem with the comparison is that it isn't based on empirical data, offering the appearance of quantification while reflecting arbitrary judgments. Second, the comparison does not offer a level playing field, as the boundaries of the two systems are gerrymandered in a way that guarantees a victory to the sharing approach. The mixed system is given broad boundaries, encompassing not just the farmland but also adjacent riparian forests and rangelands — land uses that complement each other to deliver all desired services over a large scale. The monoculture system, by contrast, appears to only include the field of crops itself, and therefore by definition cannot deliver the same benefits. This robs the land sparing approach of its essential mechanism; high-yield crop production makes it possible to set aside more land for natural habitats. If the comparison had been fair, the outcome would have been much less obvious.

Using this combination of unbalanced boundaries and conjectured performance metrics, one could show just about anything. One could just as easily draw a diagram showing that intensive monocultures combined with large blocks of natural habitats can deliver more food and more biodiversity than a fully mixed system. But that’s not the point. The point is that this flawed analytical approach risks compromising efforts to provide scientifically-sound policy guidance for conservation. To maintain that a landscape can deliver maximally on every account is magical thinking.

Trade-offs between different functions in a landscape — including food production and biodiversity — are the norm, but the piece largely ignores this reality, instead claiming that while “biodiversity-based systems, including agroecological farming or ecosystem-based forest management, are often perceived as unproductive,” this is “an incorrect viewpoint….” Yet all major assessments find a sizeable yield gap between organic farming (the world’s most widely-adopted agroecological standard) and conventional farming. Organic farming requires 25% more land to grow the same amount of food — and that doesn’t account for the extra land that would be required to provide the nitrogen that is currently imported into organic systems from intensive livestock operations. The implications of the yield gap are staggering. Adding 25% to global cropland is equivalent to 300 million hectares, almost the size of Western Europe.

The documented trade-off between biodiversity and productivity is not incidental. Organic farmland likely has higher biodiversity precisely because of its lower yields, which leaves more space for non-crop species on the fields. Moreover, organic’s biodiversity advantage comes with important caveats. There might be more species and larger populations than in conventional fields, but only of certain species — typically, more common generalists that don’t depend on old-growth forests, native grasslands, and other less disturbed habitats.

The review also sweepingly claims that “conventional (chemically intensive) monoculture agriculture produces high yields but often at the expense of water quality, climate regulation, and soil health.” Recent analyses, however, have shown that the benefits of organic farming in terms of pollution, carbon emissions, and so on are mixed, and that higher-yielding systems tend to perform better on most environmental metrics.

The land sparing approach relies on leveraging high yields to spare and protect natural habitats, and as such, protected areas play an important role in realizing its benefits. While the review describes protected areas as “essential,” it gives little credence to their potential expansion, in contrast to the revolution in farming that is implicitly presented as plausible.

In reality, with higher-yielding, more concentrated agriculture, protected areas — on lands owned and managed by governments, private individuals, communities, or indigenous groups — could be expanded to such a degree that they would form a much more effective means of protecting biodiversity than they do today. Of course, improving agricultural yields does not guarantee that protected areas will proliferate and expand — one of several important caveats in the land sparing approach — but it does make this future possible and deserves a fair hearing.

Moving forward in navigating the twin challenges of feeding a growing population while preserving biodiversity, I think we need two things. First, we need to be clear about what is science, and what are subjective values. This is a distinction that people on all sides of this debate have sometimes failed to make. When trade-offs must be made, what constitutes a “better” approach to agricultural sustainability and landscape design is not a question of science but values. When the authors talk about the “most exciting opportunity,” show disdain for “industrial supply chains,” or state their preference for community-based action, they steer their piece away from a literature review and toward a manifesto. Nothing wrong with manifestos — I’ve co-authored one myself — but let’s call a spade a spade.

Second, we need analytical rigor. Granted, the original framework for assessing the consequences of land sparing vs. land sharing for biodiversity, developed by Rhys Green, Andrew Balmford, and others, is far from a complete solution for weighing tradeoffs in farming landscapes. For instance, it only considers one outcome, the abundance of wildlife populations, while real-world situations require the consideration of other values and objectives, several of which don’t fit neatly into a land sparing vs. sharing framework. But whatever its shortcomings, the framework is also conceptually clear and empirically testable. To move this debate forward and provide sound advice to decision-makers, we need more of that sort: analytical rigor and a fair accounting of trade-offs instead of magical thinking.

Read the response from Claire Kremen and Adina Merenlender here.