A new climate bill, introduced Friday by Senators Maria Cantwell (D-WA) and Susan Collins (R-ME), would invest only a tiny fraction of the bill's revenues to catalyze clean energy technology innovation while implementing an emissions cap that requires CO2 emissions to fall roughly 5% below 2012 levels.

[Note: post updated 12/17/09 with a correction and additional information]

At least $15 billion must be invested annually to boost federal R&D budgets and jumpstart clean energy innovation to improve the price and performance of clean technologies, according to a wide consensus of energy experts, along with additional investments in clean energy demonstration, deployment, manufacturing and infrastructure.

All told, direct public investment of an estimated $30-80 billion annually is necessary to make clean energy cheap, accelerate clean tech adoption, and ensure climate objectives can be met in an affordable and timely manner.

In contrast, the Cantwell-Collins bill would initially direct just $2.5-8 billion annually to support U.S. clean energy technologies and industries, the Breakthrough Institute estimates based on the bill's supporting documents.

The Carbon Limits and Energy for America's Renewal, or CLEAR Act proposes to limit U.S. emissions of greenhouse gases through a simplified cap and trade system that auctions permits to polluters and rebates the majority of revenues directly to households through monthly, per capita dividend checks.

The legislation targets a 20 percent, economy-wide cut in U.S. greenhouse gas emissions by 2020, relative to a 2005 benchmark.

To achieve this target, the bill sets an upstream cap on importers and producers of fossil fuels that would require CO2 emissions to fall just over 5 percent relative to 2012 levels. If the most recent EIA projections of depressed emissions levels due to the economic recession prove accurate, those cuts could be in the range of 9% below the 2005 benchmark. [Note: post updated with correction on 12/17/09; rate at which emissions cap declines was misreported in prior version.]

That falls short of the bill's 20% by 2020 target and the CLEAR Act's emissions cap covers CO2 only, which is responsible for roughly 85 percent of U.S. greenhouse gases when each gas is weighted by their impact on global warming.

To fill this gap, the legislation directs the President to achieve additional emissions reductions in non-capped sectors of the U.S. economy by directly funding programs to encourage land-use changes that sequester carbon in forestry and agriculture or reduce emissions of non-CO2 greenhouse gases such as methane. The bill sets aside a portion of the cap and auction revenues in a trust fund that prioritizes spending on these additional reductions, but precise uses of that fund is subject to Congressional appropriations.

While it offers several structural advantages over competing cap and trade proposals(discussed in Part 2, forthcoming), CLEAR is principally focused on pollution reduction and does not implement a clean economy strategy sufficient to keep the U.S. competitive in the global clean energy race (see forthcoming Part 3).

The CLEAR Act will raise an estimated $42-126 billion annually by auctioning 100 percent of the emissions permits created under the bill's upstream carbon cap.

Carbon auction prices will fall between both a floor and a ceiling, initially set at $7 and $21 respectively. The floor would rise gradually at 6.5 percent above inflation annually while the ceiling rises at 5.5 percent each year.

The legislation devotes three-quarters of the carbon auction revenue to sending monthly rebate checks to households on an equal, per-capita basis, which the bill's authors claim will be sufficient to fully compensate roughly 80% of American households for any increase in energy bills caused by the implementation of carbon regulations.

That leaves just one quarter of the bill's revenue that is set aside in a "Clean Energy Reinvestment Trust Fund." The value of the CERT fund would total an estimated $10-32 billion annually at the outset of the cap and auction program, increasing over time as carbon prices rise to roughly $16-46 billion by 2020.

The bill does not specify a clear strategy for utilizing the CERT funds and hands those decisions to future Presidential budget requests and Congressional appropriations cycles.

CERT funds would be prioritized to capture additional reductions of non-CO2 greenhouse gases and enhance carbon sequestration in the agriculture and forestry sectors to enable the legislation to hit its 20% by 2020 emissions reduction target. Senators Cantwell and Collins say they envision 42 percent of the CERT funds used to pursue these additional emissions reductions outside the emissions cap on the energy sector.

In addition to these efforts, the bill names a long list of other competing uses for the CERT funds (see p. 20-21), including transition assistance for heavy industry, home weatherization and energy efficiency funding, compensation for early retirement of fossil energy infrastructure, and international climate adaptation aid.

Given the variety of competing uses and the relative priority the bill places on funding land use changes and the abatement of non-CO2 gases, the CLEAR Act could easily devote as little as a quarter of the CERT revenues to investments in clean energy technology and infrastructure.

That would leave the Cantwell-Collins bill investing only slightly more than six percent of the bill's total revenues, a sum totaling $2.5-8 billion annually at the range of initial carbon prices, to catalyze clean technology innovation, directly support clean energy manufacturing capabilities and domestic market growth, and spur the construction of critical enabling infrastructure, such as long-distance transmissions lines, smart grid technologies and electric vehicle charging stations. That level of investment in clean technology could grow to $4-11.5 billion by 2020 but falls far short of expert recommendations.

Ensuring climate objectives are met in a timely and affordable manner requires strategic public investments to improve the price and performance of clean energy sources and remove key barriers to the adoption of clean technologies. Establishing a price on carbon alone is far from sufficient to overcome each obstacle and a number of energy experts estimate that targeted public investments on the scale of tens of billions annually are necessary to catalyze an affordable and rapid transition to a clean energy system. [For more on the limits of carbon prices and the need for strategic public investments, see the chapter "Barriers to Widespread Clean Energy Adoption and the Public Investment Imperative" in this Breakthrough Institute and ITIF report] 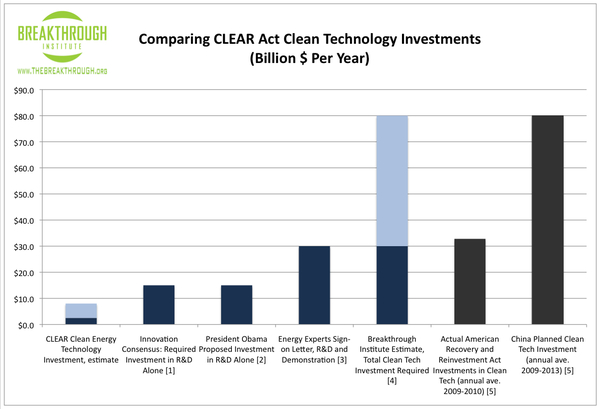 2020 emissions target is aspirational, not required by carbon cap

The CLEAR Act would establish a simplified "upstream" cap on the few thousand fossil fuel importers and producers that first bring carbon-laden fuels into the U.S. economy.

Fuel importers and producers would be required to purchase emissions permits from the federal government at regular auctions and could then trade these permits amongst themselves in secondary markets. In a departure from other cap and trade proposals, which create large Wall Street-run carbon markets replete with complex derivatives and futures products, the CLEAR bill prohibits anyone but regulated polluters and those sequestering CO2 downstream in the fuel cycle from participating in the carbon trading market.

Thus, the carbon cap itself does not decline at a sufficient pace to achieve the bill's 20% by 2020 economy-wide emissions target. The CLEAR bill's carbon cap would fall just 5.14% below 2012 emissions levels by 2020 and does not cover the non-CO2 greenhouse gases responsible for roughly 15 percent of U.S. emissions, when weighted by their impact on global warming. The bill directs the President to fund additional emissions reductions outside of the capped energy sector to meet the bill's more ambitious emissions reduction targets, as discussed above. 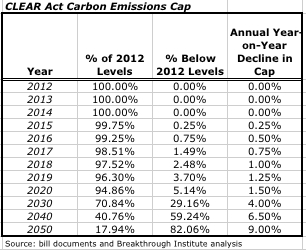 The accelerating decline of the emissions cap requires more stringent CO2 reductions in the mid- to long-term. Given the long lead times required for many clean technology investments, staff to Senator Cantwell argue that this long-term certainty will provide a clearer incentive for private sector investments in clean energy in the shorter term. This is an advantage over competing cap and trade bills, they argue, which allow extensive use of emissions offsets, creating long-term uncertainty about required emissions reductions in the capped energy sector.

CLEAR does not allow the use of emissions offsets, which competing climate bills heavily rely on for compliance, and Senator's Cantwell and Collins claim CLEAR will achieve emissions reductions comparable to those projected under the House's Waxman-Markey bill. That bill would allow enough offset usage to permit U.S. emissions in sectors of the economy regulated by the emissions cap to grow at business-as-usual rates through 2017 or beyond, depending on offset availability, according to Breakthrough Institute analysis of the House-passed bill.

However, with Cantwell-Collins relying on additional emissions reductions in land use and non-CO2 gases to supplement the bill's modest carbon cap and Waxman-Markey depending on large amounts of offsets to affordably meet emissions goals, both bill's 2020 emissions objectives should be considered aspirational targets, not firm limits on U.S. emissions.

Furthermore, neither bill's emissions cap will require a significant near-term transformation of the U.S. energy sector, while both devote little revenue to direct public investments to accelerate clean technology innovation and adoption.