In Part 1 of our analysis of the new Cantwell-Collins CLEAR Act, we demonstrated how the bill fails to make the investments needed to jumpstart a competitive American clean energy economy and fund the technology innovation and deployment needed to affordably secure deep cuts in U.S. carbon emissions. In Part 2, we focus on several important structural advantages of CLEAR that open the door to a more transparent debate about the costs and benefits of climate action in Congress.

Simplicity and transparency are the strengths of the CLEAR Act, a climate bill recently introduced by Senators Maria Cantwell (D-WA) and Susan Collins (R-ME).

In contrast to competing climate proposals, which weigh in at several hundred pages in length, CLEAR contains just under 40 pages of text. Some of this brevity is achieved by punting on the development of a clean technology investment and competitiveness strategy (see more in Part 3, forthcoming), but much of the bill's simplicity comes from avoiding many of the complex and opaque measures in competing bills, creating new opportunities for transparent and open debate of climate action that may prove critical to securing real political consensus.

CLEAR does not allow offsets, is transparent about emissions reductions carbon cap will drive

Fossil fuel importers and producers regulated under CLEAR are not permitted to use emissions offsets to prove compliance with the bill's emissions cap. Unlike other climate bills, CLEAR keeps emissions reductions in non-capped sectors strictly separate from efforts to transform the U.S. energy system through the bill's carbon cap.

This enables a transparent debate over how quickly the U.S. energy sector can (or must) transition away from fossil fuels towards cleaner alternatives (and there will surely be much debate on that subject). Avoiding offsets also ensures that emissions reduction efforts in other sectors, including agriculture and forestry, are pursued in conjunction with, rather than instead of, the critical transformation of the energy system.

CLEAR's transparent cap on energy-related CO2 emissions is thus much better than competing climate bills at providing the kind of certainty that energy sector players need to plan investments in technology and infrastructure.

Furthermore, avoiding offsets doesn't mean ignoring emissions reductions efforts in non-capped sectors. CLEAR pursues additional emissions reductions outside the energy-sector cap by using a portion of the bill's cap and auction revenues to directly provide incentives for land-use changes that sequester carbon in forestry and agriculture and fund programs to reduce non-CO2 gases such as methane (which are not regulated by the bill's single-pollutant cap on carbon).

Competing Congressional bills permit regulated entities to rely heavily on emissions offsets for compliance with their emissions caps and count on these offset purchases to drive emissions reductions in non-capped sectors. Despite widely documented difficulties (even outright fraud) in verifying the actual emissions impacts of many offset projects, these bills permit both offsets and emissions permits to be used virtually interchangeably, allowing firms subject to the emissions cap to submit either instrument to prove compliance.

That dynamic means that the degree of emissions reductions -- and technological transition -- actually achieved in the energy sector under these bills will be highly uncertain, as energy firms can simply turn to offsets in lieu of changing their own energy sources or practices, undermining the incentive for new investments in clean energy technologies.

The House-passed Waxman-Markey American Clean Energy and Security Act (ACES) and Senate Clean Energy Jobs and American Power Act (CEJAPA) authored by Senators John Kerry (D-MA) and Barbara Boxer (D-CA) both permit regulated polluters to offset up to two billion tons of their emissions annually. That's a huge amount -- roughly one third of all U.S. energy-related emissions -- and is enough to completely negate any pressure on the energy sector to transition towards cleaner energy technologies for much if not all of the next two decades, rendering their emissions "caps" effectively non-binding for the foreseeable future.

The graphic below shows the range of uncertainty associated with emissions levels permitted under Waxman-Markey (in blue) and Kerry-Boxer (in orange) versus the transparent emissions cap in CLEAR (in green). 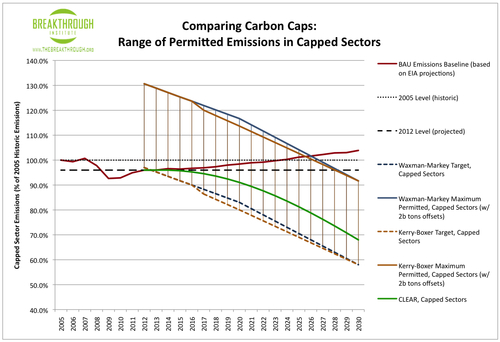 Actual legally permitted emissions levels in capped sectors under Waxman-Markey and Kerry-Boxer can fall anywhere within the range depicted above and will depend on the level of offset utilization (for reference, the U.S. EPA projects that over half of the permitted offsets will be utilized each year), meaning that CLEAR could easily outperform its Congressional competitors in spurring the transformation of the U.S. energy system. All three pieces of legislation would pursue some degree of additional emissions reductions in non-capped sectors through the means discussed above (e.g. offsets for W-M and K-B and direct programs and investments under CLEAR), which are not presented in the graphic above.

Public (and policymaker) tolerance for increased energy prices is a key constraint on politically viable carbon pricing policies. Mechanisms to constrain the cost of carbon are thus an inevitable component of any politically successful cap and trade policy.

Securing passage of any carbon pricing proposal will require a clear and transparent debate over the costs (and benefits) of such a policy and political consensus that such costs are worth it.

To date, the most prevalent cost containment mechanisms have been complex and opaque, including the massive reliance on offsets, as well as complicated "strategic allowance reserve" or "market stability" mechanisms found in the Waxman-Markey and Kerry-Boxer bills. That serves little purpose, other than to obfuscate the fact that no "cap" and trade policy truly places a binding limit on carbon emissions.

Worse yet, the reliance on the unpredictable availability of affordable offsets to contain costs has created an endless war of competing economic models, with opponents cranking out predictions of exorbitant costs that will cripple the economy while proponents predict massive supplies of low-cost offsets and efficiency "low hanging fruit" that will keep prices in check and deliver deep cuts at bargain prices. And with complex econometric models the only arbiters of "truth," the debate continues on ad infinitum.

Eschewing the traditional reliance on offsets, CLEAR offers a simple and transparent approach to cost containment that can help end these debates: the bill provides assurance that carbon prices will not rise (or fall) outside of a prescribed and predictable range of prices.

This approach, sometimes dubbed a "cost collar," guarantees that auction prices for carbon emissions permits will fall between both a floor and a ceiling, initially set at $7 and $21 respectively in CLEAR. If the ceiling is reached, additional permits will be auctioned at that price, increasing the supply of permits to contain prices, and raising additional revenues (which in this case are used to pursue additional emissions reductions; and for those of you about to complain that this "busts the cap," please read this first).

Both auction floor and ceiling prices would rise gradually each year (at 6.5 percent and 5.5 percent above inflation respectively), providing a predictable environment for investments and transparency in the range of potential costs of compliance with the cap and trade system.

Cost containment measures in competing proposals have already been trending towards increased transparency. While the price at which the strategic reserve/market stability mechanism in the House's Waxman-Markey bill was set based on an unpredictable floating average of auction prices, the Kerry-Boxer bill fixes the trigger price, much like the cost collar approach in CLEAR.

Cantwell and Collins simply take this progression to its logical conclusion, offering a predictable mechanism that enables a transparent debate about how high the body politic is willing to allow carbon prices to rise, or where we want to limit the economic damage in any worst-case scenario. $21 per ton may not be the right number, but if it isn't, CLEAR's cost collar mechanism allows Congress and America figure out what the right number is.

There are a number of other areas in which CLEAR streamlines cap and trade, each of which offers advantages.

One hundred percent of CLEAR's emissions permits are auctioned without the giveaways that can undermine the purpose of carbon pricing in the first place, result in windfall profits for polluters, or redistribute the value of a public good (the atmosphere) to corporate shareholders.

As President Obama once aptly stated, "If you're giving away carbon permits for free, then basically you're not really pricing the thing and it doesn't work -- or people can game the system in so many ways that it's not creating the incentive structures that we're looking for."

If you use a transparent cost containment mechanism to ensure cost impacts will be minimal, permits giveaways should not be necessary. Investments in clean technology innovation and deployment which actually accelerate the transition to clean energy and increase the availability of affordable emissions abatement technologies would be a much more effective use of revenues if the goal is to secure an affordable transition to a low-carbon energy system.

CLEAR places it's carbon cap "upstream," on the first point of entry of fossil fuels into the economy: fossil fuel producers or importers. This both reduces the number of regulated entities, streamlining the cap and trade bureaucracy, and ensures that the carbon price signal percolates through the entire economy, providing a price signal at each step of the energy pipeline.

Finally, CLEAR limits participation in carbon trading markets to regulated entities. Wall Street derivatives marketers, speculators and other interests can't buy or sell emissions permits or create and trade in carbon derivatives or other secondary products under CLEAR, preventing what many (e.g. these two members of Congress for example) predict could be a new round of carbon market manipulation and mayhem if the Waxman-Markey bill (or similar legislation) becomes law.

With the government auctioning 100% of the permits on a frequent (e.g. monthly) basis to begin with, there's no need for Wall Street's participation in the permit market, and the bill's authors argue that there's enough regulated entities who will need to buy and sell permits amongst themselves to provide sufficient liquidity and, with the help of the cost collar, avoid unnecessary market volatility.