The world was moving faster towards reducing its reliance on carbon intensive energy consumption in the 1970s and 1980s than in the past several decades. In fact, over the past 20 years there has been little if any progress in expanding the share of carbon-free energy in the global mix. Despite the rhetoric around the rise of renewable energy, the data tells a far different story.

Policy makers around the world have frequently expressed their desire to reduce the emissions of carbon dioxide to a level consistent with stabilizing the amount in the atmosphere at a low level. Conceptually, the challenge is akin to stabilizing the amount of water in a bathtub by modulating the amount filling the tub from a spigot. If there is an open drain at the bottom letting a bit of water out, then stabilization of the water’s height occurs when the amount coming into the tub equals the amount draining out.

The carbon dioxide is akin to the water filling the bathtub and the oceans and the land surface provide some take-up of carbon dioxide, serving like a small open drain at the bottom of the tub. For the stabilization of carbon dioxide, this means that emissions of carbon dioxide, which result primarily from the combustion of fossil fuels (oil, natural gas and coal), must be reduced by something like 80 percent or more.

However, instead of looking at the issue through the lens of emissions, another way to look at the challenge of stabilizing carbon dioxide in the atmosphere is through energy consumption. Whatever the total level of future energy supply turns out to be, to be consistent with stabilization – metaphorically stopping the rise of the water in the bathtub – the proportion of global energy that comes from carbon-free sources needs to exceed 90 percent.

So how are we doing working towards that 90 percent?

BP, in its excellent annual statistical report on world energy, provides data that allows us to answer this question. The figure above shows the proportion of global energy consumption that comes from carbon-free sources. These sources include nuclear, hydro, solar, wind, geothermal, and biomass. The graph shows that from 1965 to 1999 the proportion of carbon-free energy in global consumption more than doubled to more than 13 percent, coincident with nuclear power increasing by a factor of 100 and hydropower by a factor of 6.

However, since 1999 the proportion of carbon-free energy in the global mix has dropped slightly. In fact, 1999 was the peak year for non-carbon energy. From 1999 to 2012 consumption of nuclear power dropped by 2 percent. While solar has increased its contribution to consumption by a factor of 100 and wind by 25 from 1999 to 2012, these sources remain at about 1 percent of total global energy consumption, and are dwarfed by the resurgence of coal. 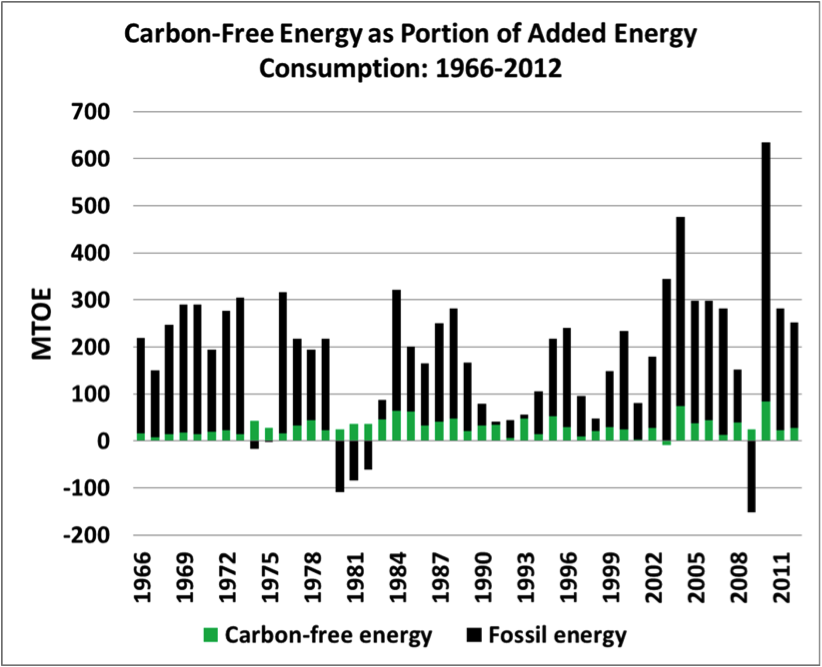 Much is often made about the rise of renewable energy, but the data tells a more sobering story. In the ten years that ended in 2012, the world added about 2,500 million metric tonnes of oil equivalent (in layman’s terms, a lot) to its total energy consumption. Of that increase about 14 percent came from non-carbon sources. Compare that to the ten years ending in 2002, during which about 19 percent of the new energy consumption over the previous decade came from non-carbon sources. The figure above shows the proportion of annually added energy consumption that comes from carbon-free and carbon-intensive sources.

The data shows that for several decades the world has seen a halt in progress towards less carbon-intensive energy consumption, at about 13 percent of the total global supply. This stagnation provides further evidence that the policies that have been employed to accelerate rates of decarbonization of the global economy have been largely ineffective. The world was moving faster towards decarbonizing its energy mix long before climate policy became fashionable. Why this was so and what the future might hold will be the subject of future posts in this continuing discussion.