The large decline in U.S. emissions in 2008 and 2009 due to the economic recession ensures that if the House-passed Waxman-Markey climate legislation becomes law, the bill's emissions reduction cap will require no reduction of carbon emissions over the first two to five years of the program. The resulting oversupply of emissions permits will allow regulated firms to continue business as usual emissions through as late as 2018, according to a new analysis by Breakthrough Institute based on new Energy Information Administration emissions projections that take into account the impacts of the global recession.

The analysis further establishes that very modest utilization of the offset provisions of the Waxman-Markey bill, as little as one-tenth to one-quarter of the levels of offset utilization projected by the Congressional Budget Office and the Environmental Protection Agency respectively, will allow emissions in regulated sectors of the U.S. economy to proceed at business as usual levels through 2020 or beyond. Depending upon how quickly U.S. emissions recover over the next decade, firms would need to purchase on average as few as 124 million tons of offsets annually in order to comply with the emissions reduction caps through 2020, substantially less than the 526 million and 1,223 million tons of average annual offset utilization between 2012 and 2020 projected this summer by CBO and EPA respectively.

In conjunction with the free allocation of a high percentage of emissions allowances under Waxman-Markey, and lower global demand for offsets from recession-hit EU and U.S. firms, substantial over-allocation of emission allowances in the early years of the program will likely lead to a cap and trade program awash in both cheap emissions allowances and offsets during at least the first decade of implementation. Under such conditions, the functional carbon prices for the first decade or more under Waxman-Markey are likely to hover at or even below the $10 per ton floor on allowance auction prices (rising slowly each year) established by the bill.

The reason for this projected over-allocation of pollution allowances is because the House cap and trade legislation would initially distribute allowances based on 2005 emissions levels, which were much higher than 2008 or 2009 levels. By the time the Waxman-Markey emissions cap would go into effect in 2012, U.S. emissions may still be recovering to pre-recession levels and may remain substantially lower than historic 2005 levels.

Under the slow recovery scenario, relatively low business-as-usual (BAU) emissions projections and the banking of excess permits by firms means that the Waxman-Markey cap would not require firms to reduce emissions at all -- either themselves or through purchasing offsets -- until 2018. Under the fast recovery scenario, emissions reductions would not be required until 2014.

Slack demand and the resulting low price for pollution permits would create a strong incentive for firms to hedge their future carbon liabilities by buying and banking emissions credits while they are in excess and prices are low, building up a bank of permits for the future while continuing with business-as-usual practices.

Furthermore, even if they utilized just a fraction of available offsets each year, U.S. firms would not be required to reduce their own emissions until as late as 2030 or beyond. Depending on how quickly the economy recovers and emissions rise, firms would need to use just 6 percent to 25 percent of the total amount of offsets permitted under the House bill for emissions levels to rise at business-as-usual rates through 2020, and only 43 percent to 66 percent of total offsets to continue emissions growth through 2030.

The Waxman-Markey floor on permit prices would prevent the auction price of carbon dioxide in the primary auction market from dropping below $10/ton. However, with the majority of permits given away for free in the first decades of the Waxman-Markey cap and trade program, and a substantial over-allocation of permits projected in the early years of the program, the correspondingly slack demand for permits may result in a large secondary market for emissions allocations in which permits trade for substantially less than $10/ton. The result of such an outcome would be a functional carbon price substantially below the nominal $10/ton floor established through the statute for the primary allowance market. Even at the auction floor price, the carbon price is unlikely to be sufficiently high to act as a strong incentive for firms to improve their energy efficiency at above-BAU rates, or to shift to low-carbon power sources. A carbon dioxide price of $40 per ton in the EU in 2008 was not high enough to derail European plans to build 50 new conventional coal-fired power plants over the next five years, for example.

Under either set of assumptions, the total supply of permits and offsets created under the ACES cap and trade program would legally permit U.S. emissions to continue at BAU rates through most if not all of the next two decades; and with emissions down in the EU and across the globe due to the recession, demand for offsets from the European ETS and other emissions trading programs will be down as well, increasing the likely supply of offsets at affordable prices.

This year, the global recession is expected to drive the biggest annual drop in global greenhouse gas emissions in forty years. With full economic recovery in the U.S. and globally likely to take several years, the latest projections from the EIA have revised downwards expected greenhouse gas emissions levels. EIA projects U.S. emissions from the burning of fossil fuels will fall six percent in 2009, after dropping three percent in 2008. Emissions would rebound slightly as the economy begins to recover, rising less than one percent (0.9 percent) in 2010 in the EIA's projections, but may not fully rebound to historic 2005 levels until well past 2012.

In the slow recovery scenario, U.S. emissions follow the projections in the new EIAShort Term Energy Outlook (September, 2009) report through 2010, before returning to the long-term growth rates projected in the EIA's Annual Energy Outlook 2009 from 2011 through 2030. The fast recovery scenario reflects the more optimistic economic forecasts contained in the CBO's most recent economic forecasts (August, 2009) and slightly higher emissions intensity rates (the amount of CO2 emitted per unit of economic activity) in the EPA's analysis of the ACES legislation.

A full spreadsheet of assumptions and calculations can be downloaded here (.xlsx file). These scenarios are depicted in the graphics below (click any to enlarge). 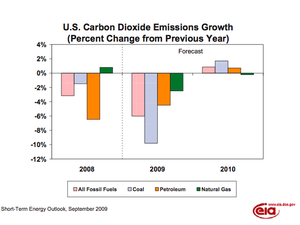