Germany’s solar program will generate electricity at quadruple the cost of one of the most expensive nuclear power plants in the world, according to a new Breakthrough Institute analysis, raising serious questions about a renewable energy strategy widely heralded as a global model. 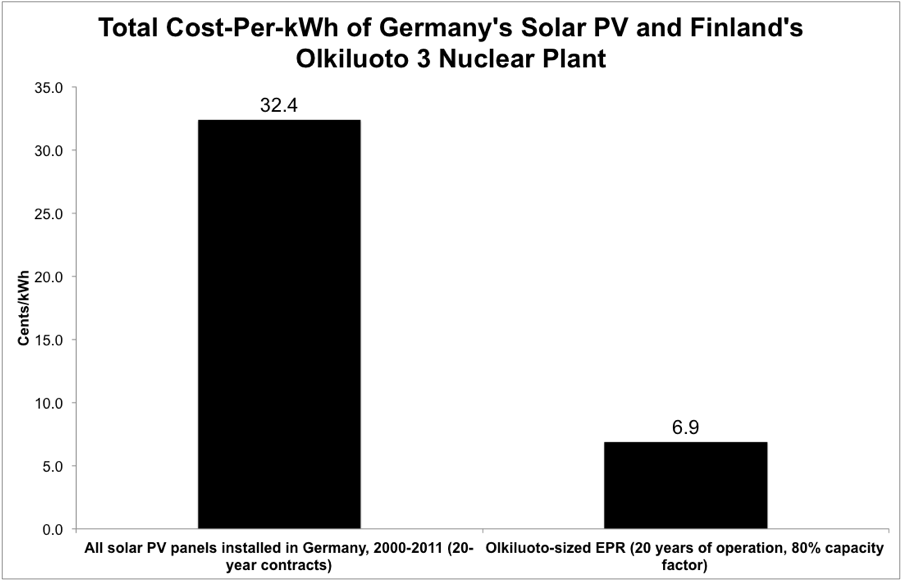 The findings challenge the idea that solar photovoltaic is a disruptive, scalable, “shelf-ready” technology with a cost advantage over nuclear. Energy analysts frequently point to Finland’s advanced nuclear project at Olkiluoto, which is seven years behind schedule and billions of dollars over budget, and solar in Germany as indicative of future cost trends working against new nuclear technologies and in favor of solar.

Proponents of Germany’s Energiewende, which now involves jettisoning the country’s nuclear fleet by 2023, argue that solar and wind can make up the difference in lost capacity. A straightforward cost comparison between the two programs over the same 20-year period, however, reveals the costs of this proposition.

The Finnish European pressurized reactor (EPR), with an estimated total cost of $15 billion, will generate over half as much energy as the entire existing German solar program, which will run to roughly $130 billion. The total cost of electricity produced by German solar will be 32 cents per kilowatt-hour versus 7 cents per kilowatt-hour for the Areva-Siemens nuclear plant in Finland — a more than four-fold difference. Two such nuclear plants would generate slightly more than Germany’s solar panels, at less than a fourth the total cost. 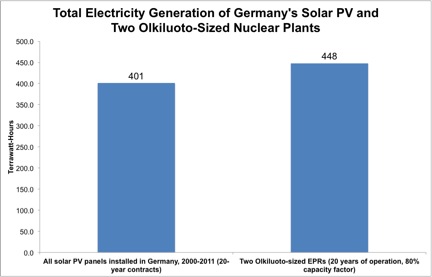 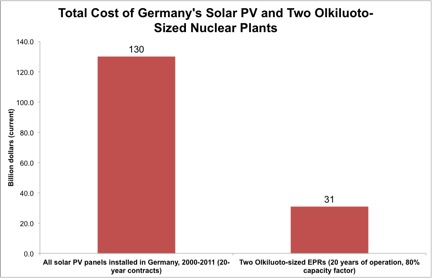 The $15 billion estimate for Finland’s Olkiluoto 3 reactor is based on fixed1 and variable costs ($0.02/kWh).2 The reactor will generate about 225 TWh in a 20-year timeframe,3 more than half of what all of Germany’s solar panels installed between 2000 and 2011 will generate over their 20-year feed-in tariff contracts.

The construction of Unit 3 of Finland’s Olkiluoto nuclear power plant — approved by the Finnish government in 2005 and built by a consortium involving the French company Areva and Germany’s Siemens — has come under fire for construction delays and cost overruns. The 1,600-megawatt project, which aims to meet 10 percent of Finland’s energy demand, is being built on an island in the Baltic Sea.

Initially expected to cost $4.2 billion and take four years to complete, Unit 3 is now estimated to cost at least $11.1 billion and will not enter into service before 2016.4 Olkiluoto 3 is the first of four advanced European Pressurized Reactors (EPRs), with others under construction in France and China. Finland’s project has been criticized as an example of “all that can go wrong in economic terms with new reactors.”5

Moreover, solar panels do not last as long as nuclear reactors and also give reduced output as they age. After three decades a single nuclear plant with the same output of Olkiluoto would generate about as much electricity as all of the German panels installed in the last decade.7 Over its entire 60-year lifetime, the EPR will generate between 589-757 TWh, depending on capacity factor.8

Assuming a 0.5 percent degradation rate for solar PV cells (a widely used figure), the 24.7 GW of solar PV capacity installed in Germany will generate 786 TWh over 40 years, or 604 TWh over 30 years (solar PV lifetimes are commonly considered in the 25-30 year range),9 just a slightly higher output range than that of a single EPR. After a 30 to 40 year period some panels may continue to generate electricity but most will be taken offline or replaced, and owners will incur new capital and installation costs. 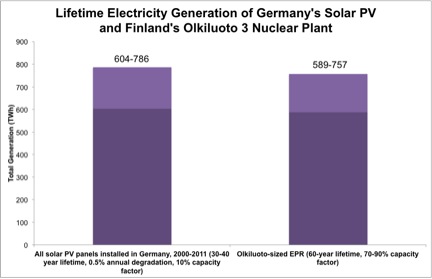 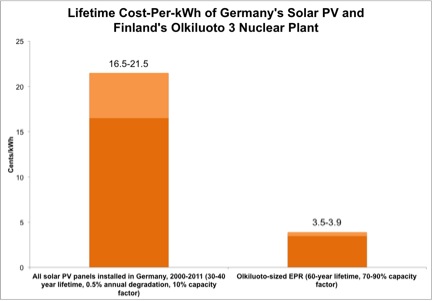