Why Cap and Trade Had No Impact on Emissions

After the European Parliament voted down a proposal to prop up its flagship emissions trading scheme (ETS), most observers finally admitted what has been obvious for a while: the program is contributing little to accelerating the decarbonization of the European economy. However, a few eternal but confused optimists see the program as working just fine. Here are a few thoughts in response to that bit of pushback.

To achieve aggressive emissions reductions goals – such as a 80 percent reduction by 2050 – requires annual rates of decarbonization of 5 percent or greater. This figure provides a baseline against which to think about the performance of actual policies.

The European Union ETS was created to put a price on carbon so that industry would factor that price into its decision making. It is the price that does the work in a cap and trade system for emissions reduction. The cap and the trading set the price, and the price creates incentives for innovation in energy consumption and production. The EU explains: “The market price of allowances — the 'carbon price' – creates a greater incentive the higher it is.”

Conversely, there is a low incentive for innovation with a low market price. For those interested in accelerating the decarbonization of the economy, the collapse of the price of carbon under the ETS is prima facie evidence of the program's ineffectiveness.

At the same time, price is the program's Achilles’ heel. While people in Europe and around the world have shown a willingness to pay a bit more for energy in support of environmental goals, that willingness has its limits. This reality – what I've called an iron law – means that efforts to motivate innovation through raising the price of energy are ultimately doomed to fail.

There is some evidence that the ETS has simply put a price on business as usual. In The Climate Fix, I showed that Europe's rate of decarbonization was essentially identical before and after the ETS was introduced. If the program has effects, decarbonization has not been detectable beyond historical business-as-usual rates. 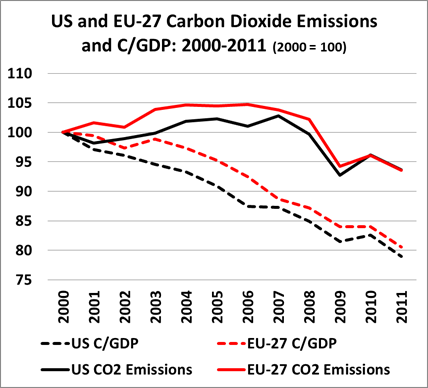 With the United States and the EU averaging ~2 percent per year since 1990, it is ironic to see otherwise committed environmentalists acting as apologists for the EU ETS. The uncomfortable reality is that no policies have been put in place anywhere in the world that have indicated an ability to accelerate rates of decarbonization to levels approaching 5 percent per year. This includes the EU ETS. If greater progress is to be made, debate will have to move beyond carbon pricing and the relative success or shortfalls of the EU ETS.

Michael Shellenberger and Ted Nordhaus, "Beyond Cap and Trade, A New Path to Clean Energy," February 27, 2012