How Much Energy Does the World Need?

In the early 1920s, when my grandparents were just small children, only about 40% of Americans had access to electricity. Over the course of a generation that number reached close to 100%. Today, inexpensive, reliable and plentiful access to electricity is something that most people in OECD countries take for granted. I was reminded about this when I attended the recent annual meeting of the Colorado Rural Electric Association, a group that decidedly does not take electricity for granted. The meeting was opened by appealing to core shared values: “The greatest thing on earth is to have the love of God in your heart, and the next greatest thing is to have electricity in your house."

Yet billions of people around the world today do not have electricity in their houses. And while most projections see energy use expanding greatly in the coming decades, they also expect 1 to 2 billion to be living without electricity even by 2035. That may very well be the future we get. But it doesn’t have to be the future we work toward. To the extent that we allow such forecasts to constrain our debates over global energy and climate change mitigation, we do a disservice to the global poor, whose future wellbeing will undoubtedly require more-robust energy access.

The US Energy Information Administration, for example, projects that world energy consumption will increase by the equivalent of about 4,000 power plants in 2035 (about 1.7% per year) — or from 500 quads to 770 quads. A “quad” is a quadrillion BTUs, or about the same energy produced over a year by 15 1-gigawatt power plants, e.g., nuclear, coal or gas. While 4,000 new power plants worth of energy consumption sounds like a lot, after taking projected population growth into account, by 2035 global per capita energy use increases only by about 23% (data from the World Bank and the United Nations). In other words, from 2010 to 2035 global per capita energy consumption is projected to grow from about the average per capita consumption of Chile today to that of Croatia today, which is not a big change.

Rather than starting from today and asking how much energy the world might consume in 2035, let’s turn the question upside down. Let’s postulate different levels of energy access, efficiency, and equity for 2035, and ask what it would imply in terms of required energy supply, applying an approach that policy wonks call “backcasting.”

For instance, consider sub-Saharan Africa (minus South Africa), which today has about 30 gigawatts of electricity generating capacity, according to Morgan Bazilian, Deputy Director of the Joint Institute for Strategic Energy Analysis. To raise the region to the average per capita electricity access available in South Africa would require 1,000 gigawatts (source here in PDF). In other words, sub-Saharan Africa would need to increase its installed capacity by 33 times to reach the level of energy use enjoyed by South Africans — and 100 times to reach that of Americans. The scale of the energy access challenge is enormous.

For this exercise I am going to start with a focus on electricity consumption, and use three countries in 2010 as analogies -- Bulgaria, Germany and the United States -- to represent low, medium and high levels of energy access assuming levels of efficiency and equity similar to each. In 2010 Bulgaria saw about 4,500 kWh of electricity consumption per capita per year, Germany 7,100 and the US 13,400. For comparison, the International Energy Agency defines “energy access” to be about 250 kWh per household per year, or about 2% of that used in the average American household. The global average in 2010 was just under 3,000 kWh per capita per year. 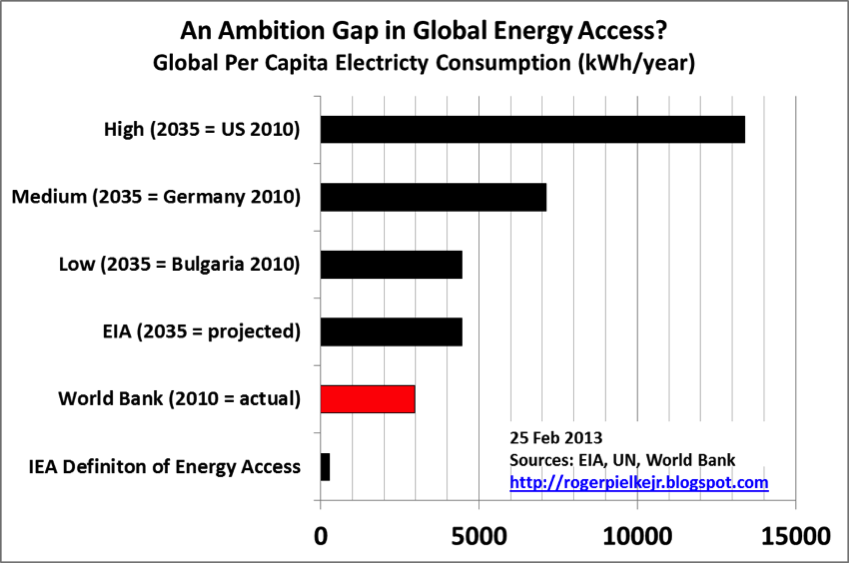 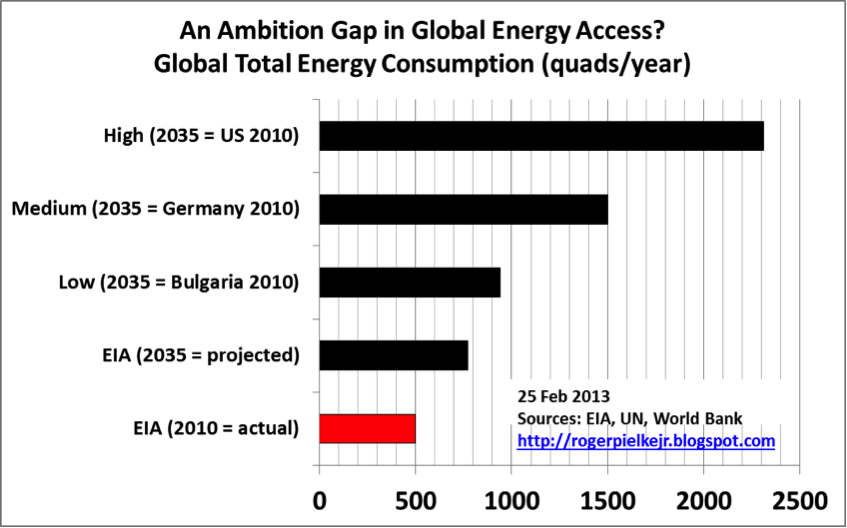 Let’s try to put these numbers into perspective with respect to total energy consumption in 2035. In terms of quads, the low, medium and high scenarios imply a total 2035 consumption of 940, 1,500 and 2,310 quads, or an increase over the EIA 2035 projection of 170, 1,000 and 1,810 quads. These represent the equivalent of a doubling, a tripling and more than a quadrupling of global energy consumption in 2010. Of course, different assumptions (e.g., about electricity vs. liquid fuels, etc.) will lead to different numbers, but qualitatively much the same results. Global energy access as you and I understand the concept implies massive amounts of new energy.

Another way to evaluate these numbers is to compare them to the magnitude of the energy challenge implied by policies seeking to address climate change. Decarbonizing the global economy to a degree consistent with low stabilization targets for atmospheric carbon dioxide implies replacing about 80% of current energy – about 400 quads – and meeting all future energy demand with carbon free sources of energy. A 2035 world which consumes energy at the level of 2010 Bulgaria implies more than a doubling of needed carbon-free energy. Germany and US equivalency implies almost a quadrupling and close to a sextupling, respectively. Is it any wonder that many stabilization scenarios used in climate policy analyses keep poor people mostly poor?

So what to take from these numbers? I suggest three conclusions.

First, a world of energy access as that concept is understood by most people in the wealthy parts of the world implies a level of energy consumption far beyond that contained in conventional projections of consumption for the next several decades. Securing such energy access will require much greater policy attention than has so far been devoted to the issue. Just as in the US in my grandparents’ generation, market forces alone will be insufficient to provide energy for all. Concerted public action, perhaps coordinated to some degree globally, will be necessary.

Second, the magnitude of the challenge of providing energy for all is at least as large as the challenge implied by accumulating carbon dioxide in the atmosphere, and perhaps many times larger. Independent of the climate issue, there are good justifications why diversifying the global energy mix beyond fossil fuels makes sense, for security, environmental, health and economic reasons.

It would therefore seem obvious that those who prioritize climate might find common ground with those who favor increasing energy access to support major new initiatives in energy innovation and deployment. Such an approach would at least address the split between rich and poor nations that has characterized international climate policies for decades. Further, a wealthier world with more equity in energy access will be far better positioned to deal with the technological challenges of decarbonization. Those in the climate movement who express frustration that their issue has not been judged important enough to motivate aggressive steps toward energy innovation have overlooked energy access as a much broader base for securing and sustaining broad support around the world for advances in energy technologies and their deployment.

Finally, independent of time scale, the world is irreversibly moving towards greater energy access – in fits and starts to be sure -- but there can be no doubt about the aspirations of the almost 6 billion people in non-OECD countries who collectively consume as much energy as the 1.2 billion in OECD countries. The world of the future will consume vastly more energy than the world today. The only questions are how efficiently and effectively we get to that high energy world. Putting energy access at the center of policy discussions would be a smart first step.