Larger Factories and More Efficient Panels Were the Key

We hear a lot about energy research and development. Perhaps that's because it's the one sort of policy that Republicans and Democrats generally agree on. But there's a different kind of research that I'd like to see get a lot more attention and funding. I'm talking about research into what various kinds of energy policies actually *do* to shape the technical possibilities open to humanity.

In my time researching energy, most of the people who actually care about where we get our energy from have committed to an energy source, be it oil, gas, traditional nuclear, wind, solar, geothermal, or thorium. Then, they go looking for policies that would benefit their technology. I've also run into a lot of people who believe in inexorable laws of change in energy, whether that's decarbonization or the inevitable rise of natural gas or nuclear power. And I've run into a lot of energy experts who believe in a fairly simple relationship between research money going in and technologies coming out.

Unfortunately, none of these three groups of people is likely to produce very good energy policy. To put it in more mainstream terms, we've got a lot of energy pundits and very few energy Nate Silvers, who put reality (i.e. good data) ahead of ideology and intuition. Don't get me wrong: everyone in energy loves them some data, but few people are interested in using it the way Silver does.

Let me introduce you to a scholar who I think embodies the kind of research we need more of. His name is Gregory Nemet. He did his PhD at Berkeley and now teaches at the University of Wisconsin, Madison. I first discovered his work through a 2006 paper in Energy Policy, "Beyond the Learning Curve: factors influencing cost reductions in photovoltaics." Now, you're probably familiar with the neat story that learning curves tell. They say that as you do something, you get better at it, and because it's a curve, the assumption is that this happens at a fairly consistent (and therefore predictable) rate. This is part of the rationale for supporting photovoltaics after all. They've gotten so much cheaper (orders of magnitude) over the last few decades that proponents suggest they're inevitably going to get cheaper than grid electricity some time in the near future.

But this is just too simple a model for the way the world works. Nemet, a Breakthrough Institute Senior Fellow, first demolishes the idea that we can bank on simple learning by experience models that show consistent cost reductions as the amount of solar produced increases. These analyses are super sensitive to small changes in the learning rate or the growth of the market (the number of megawatts of PV production in a given time span). And that's not even taking into account the discontinuities that we know occur in technological development. He raises several other powerful objections based on the literature. All in all, it's a pretty amazing takedown of a common method of analysis.

But he doesn't stop there. He then uses the history of photovoltaics (from 1976-2001) to demonstrate a new way of modeling cost reductions in technology. It's hard to gloss the whole thing, but suffice to say that his model allows him to identify which of the following factors were important for different periods of the technology's evolution in driving down cost: plant size, scaling factor, module efficiency, silicon cost, wafer size, silicon use, yield, polycrystal share, polycrystal cost. 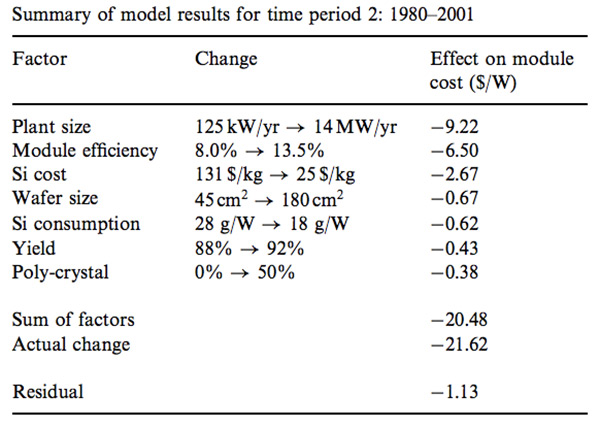 With kind of policy impact might that have? Well, if increasing the size of photovoltaic plants appears to lead to large cost reductions, then it might be a good idea to have a loan program that helps get these sorts of plants built. A loan program much like the one that produced many good outcomes along with a few duds like Solyndra.

But there's a deeper reason to support this kind of research. When people think of technological development as somehow magically proceeding apace, it makes it seem *as if* people's personal and civic interventions don't matter. But of course they do! It's just that when you draw one curve to stick in your PowerPoint, all the decisions that affect the factors above get submerged into a false law of simplistic cost reductions.

Since 2006, Nemet has kept working on important research projects. He's done more work on trying to model the effectiveness of differing government support models, as in this paper on whether subsidies or R&D spending are more likely to bring organic solar cells to market. (In this case, the answer is R&D.)

His most recent work, though, might be his most significant, though I think his current research program is not yet complete. In various ways, he's been trying to get at a very basic question: do demand-side subsidies work to stimulate technological development? Or might better policies exist? This is more than a theoretical question, given the various tax credits both here and abroad that appear to have pushed low-carbon technologies forward. Note the way I framed his project, which I think he would agree with. This is not about whether Nemet believes government should be subsidizing energy projects or not. This is not about whether solar or wind or nuclear *should* be the future of our energy system. No, this is something more basic and more difficult to answer: how much can subsidies enhance the learning (and therefore cost reductions) that an industry like wind actually does?

If you're curious what his final analysis is, here's the conclusion from an excellent forthcoming paper in the Journal of Policy Analysis and Management. You probably won't be surprised to learn that he makes a nuanced judgment:

The magnitude of public funds at stake add some urgency to improving understanding of the extent and characteristics of knowledge spillovers from learning by doing. The main results here imply that policies that enhance demand are necessary to generate sufficient knowledge from experience. Other insights from this case--especially depreciation and diminishing returns--heighten the value of policy instruments with performance-oriented mechanisms and longevity. That experience-derived knowledge appears to be so ephemeral suggests that we should also consider explicit support for codification and transfer of what is learned.

Alexis Madrigal is a senior editor at The Atlantic, where he oversees the Technology Channel and where this was originally published. He’s the author of Powering the Dream: The History and Promise of Green Technology.