Gas is leaking from pipes beneath New York City and Bill McKibben has confidently informed us that this is simply more evidence that the climate benefits of shale gas are much worse than many claim. Unfortunately the only real message from the article is that Bill McKibben is rather selective about evidence when it comes to fracking and that his apparent willingness to “do the math” on climate change does not transfer over very well to the rather important question of where we get our energy from.

I’ll begin by tersely summarizing the report (which McKibben notes was funded by an anti-fracking group). Essentially the gas pipes under New York city are old and apparently leaking methane. This supposedly means that some of the claimed emissions reductions from shale gas are not happening. Leaking methane means the emissions are not being saved.

So, what do New York’s old and leaky pipes have to do with the claimed emissions reductions due to shale gas? Precisely zero. Here’s why.

The gas pipes under New York are principally used to supply domestic gas for heating. However, the emissions reductions from shale gas are entirely down to fuel switching from coal to gas in power plants, and slightly from increased gas use in other industrial processes. The amount of gas used for domestic purposes has been unaffected (so far) by shale gas.

Here is the situation with power plants summarized: 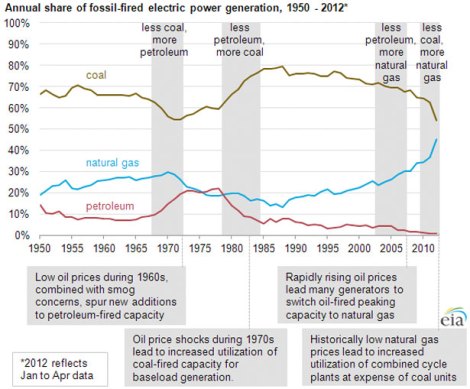 Natural gas is growing quickly, while coal is doing the opposite. To put harder numbers on it, the percentage of US electricity coming from coal went from 49 percent in 2006 to 37.6 percent in 2012, while gas went from 20.1 to 30.3 percent. This has a very significant impact on the carbon intensity of the US electricity grid. (Methane leaks aside, gas plants emit half as much CO2 as coal plants.) 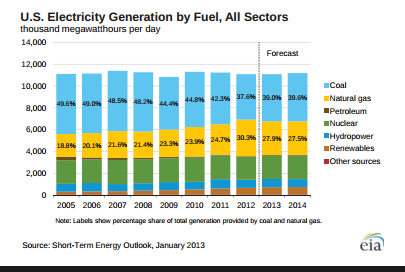 The national trend since around 2005 is essentially flat. Things have been pretty flat for a long time.

Here is the state of New York: 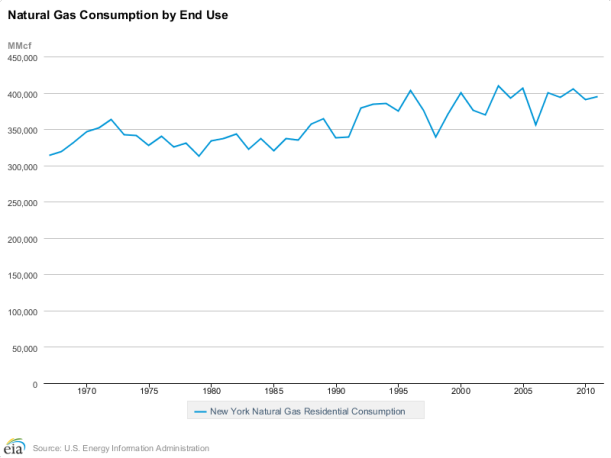 Again, the trend is flat. Domestic gas use has not been impacted that much by the boom in shale gas, if at all. In other words, the amount of gas flowing through, and leaking from, New York City’s pipes is no higher today than it was before the shale gas boom.

So, the only thing McKibben gives evidence for is that New York should perhaps consider replacing a few of these pipes, and that the fracking debate continues to be a source of endless nonsense.

Robert Wilson is a PhD candidate in Mathematical Ecology at the University of Strathclyde in Glasgow. He blogs at Carbon Counter, where this article first appeared. You can follow him on Twitter @CountCarbon.