Nuclear Waste Worth Its Salt — for a Billion Years

250 million-year-old DNA has been recovered intact from a nuclear waste disposal site in New Mexico and provides ample evidence that the waste will be imprisoned for life, but likely prison time will top a billion years.

Forensic teams of scientists working over a decade in laboratories at University of North Carolina, Los Alamos National Laboratory, New Mexico State University, and West Chester University carefully culled the evidence from original fluid inclusions in the massive salt rock that hosts America’s only operating deep underground nuclear waste repository, the Waste Isolation Pilot Plant (WIPP) near Carlsbad, New Mexico. The DNA and other biomolecules are remnants from ancient salt-loving bacteria that once lived in a drying-up ocean.

That biomolecules could survive a quarter of a billion years, by far the oldest intact biomolecules ever found, is evidence that this rock is the best choice to imprison any and all nuclear waste in a deep geologic repository, and will isolate the waste from the environment for over a billion years.

Unknown to most, the United States has a successful permanent deep geologic nuclear repository for nuclear waste, the WIPP. WIPP is presently licensed only for nuclear bomb waste (transuranic or TRU) but was designed to hold any and all nuclear waste. WIPP is located a half-mile below the Earth in the massive Permian age salts of the Salado Formation within the Delaware Basin that cuts across southeastern New Mexico into west Texas.

The Salado has geological, physical, chemical, redox, thermal, and creep-closure properties that make it possible for long-term disposal – long-term in this case being greater than 200 million years. These properties also are the same ones that allow biomolecules to survive so long.

At the time of this salt rock’s formation in the Permian, the North American plate was tilting eastward, and the sea in the Delaware Basin was periodically cut off from the proto-Pacific. The sea would evaporate, the seawater reaching the solubility point for sodium chloride (NaCl), and salt would begin precipitating out. As the sea disappeared, the growing salt crystals would entrap small amounts of the residual seawater, including the halophylic bacteria that were the only things that could survive in its concentrated brine.

After a few million years of repeated re-flooding and evaporation, about 10,000 square miles of salt and sediment were precipitated, 2,000 feet of which are particularly pure and massive salt, massive meaning not interbedded with silts and sands like most other salt deposits. The repository is smack in the middle of this horizon.

Elsewhere in the world at this time, big things were afoot. An enormous extinction was wiping out most marine species. Conifers were coming to dominant plants on land. A new group of animals, called dinosaurs, were about to rise big time. Familiar friends like starfish and sea urchins were just arriving on the scene. We see these from the hard parts left behind, but never from actual biomolecules. 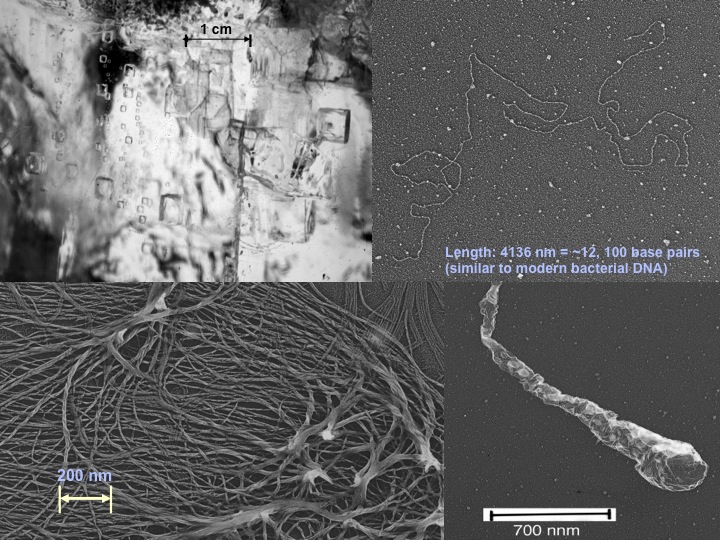 Upper left: Photomicrograph of fluid inclusions of 250-million-year-old Permian seawater crystallographically-trapped in the precipitated salt rock of the Salado Formation that is now hosting the nuclear waste repository at the WIPP site near Carlsbad, NM. Upper right clockwise: Electron micrographs of ancient halophylic bacterial DNA (~12,000 base-pairs), crenulated bacterial husks and cellulosics from old cell walls that are trapped in the inclusions. This type of massive salt, first selected by the National Academy of Sciences in 1957 for all nuclear waste disposal, is so isolating that water will not move an inch in a billion years. Photo and micrograph credit: Dr. Jack Griffith, University of North Carolina.

These biomolecules are no mean discovery. Biomolecules like DNA and proteins do not hang around very long. At most, they generally degrade in thousands, not millions, of years either by thermalytic degradation (heat), radiolytic degradation (background radiation and cosmic rays), chemical degradation, or being eaten by something else.

The Salado is pretty pure NaCl. (I occasionally make margaritas using salt I’ve chipped from the nuclear repository walls.) So there is little naturally occurring radioactivity from the usual suspects like U, Th, and their daughter products that are in all other rocks and sediments. Since the Salado was also deposited fairly rapidly and removed from cosmic rays, there was little radiolytic degradation of the biomolecules.

At the same time, the formation was never buried deep enough to heat above 41°C which is the denaturing point for DNA and proteins (it’s why we get really worried when someone has a 105°F fever), so they never thermalytically degraded either. The halophylic bacteria were the last things left alive in the evaporating ocean, so there was nothing to eat them. And the brine is a perfect preserving solution.

In addition, the salt in which these crystallographically-trapped fluid inclusions reside is molecularly tight, and the water hasn’t moved a millimeter in 250 million years. The diffusion coefficient is less than one-quadrillionth of a meter-squared per second, a billion times less than what we consider tight in most rocks we use in construction and toxic chemical waste disposal. The same is true for the hydraulic conductivity.

Better yet, unlike other salts in other countries, the geologic setting and history of the Delaware Basin is such that there has been no folding or faulting, no volcanism, no deformation at all, since the salt was formed. The formation in this area is not even tilted a single degree. Nothing has happened to this rock in 250 million years, and nothing else will happen for the next billion. As a geologist, you couldn’t dream up a place this good for something to rot in prison for practically forever.

And the rock does all the work. No need for prison bars, extra barriers, cement linings, super canisters, or any other human-engineered systems like you have to do at every other candidate nuclear repository site in the world. The salt does all the work of isolating the waste. Even the containers are just for shipping.

Drilling the repository and emplacing the waste only causes a 14-foot disturbed zone around the waste. Beyond that, the salt is unaffected, even by the waste heat. But when salt is removed during mining, the pressure change causes the salt to creep in from the semi-infinite source thousands of feet around the repository, and it closes as tight as it was before. The creep is about three inches per year, so the repository quickly re-seals itself as molecularly tight. The hotter the waste, the faster the sealing and the better the performance. No chance for anyone to smuggle a file in a birthday cake, or water in a fracture.

WIPP has been operating for 15 years, and as of this writing, has disposed of over 90,000 cubic meters of nuclear weapons waste that has traveled over 14 million miles on the road, without an incident. Some of this waste is pretty high-activity waste, well over a Curie per liter from reprocessing of spent fuel from old weapons reactors, and is hotter than any of the high-level waste in those leaking tanks.

Evidence of this salt formation in putting away nuclear waste for life should make for a very happy new year!