A Response to CO2 Scorecard

Despite declining emissions, cleaner air, and falling energy prices, natural gas opponents continue to look the gift horse that is the US shale gas revolution in the mouth. The latest canard comes from CO2 Scorecard, the policy wing of environmental consultancy Performeks LLC. Some readers will recall that last year, CO2 Scorecard released a study claiming that rising natural gas generation accounted for only about a quarter of US emissions reductions from 2011 to 2012. Now, in a recent report, which has been cited by the AP and Mother Jones, they claim that rising gas generation accounts for all of the increase in US coal exports. This analytical sleight of hand leads them to claim that fuel switching from high-carbon coal to lower carbon natural gas in the U.S. power sector has resulted in a net increase in global CO2 emissions.

How does CO2 Scorecard reach this remarkable conclusion? First, by looking at year-over-year changes in generation shares between coal and gas and assuming that fuel-switching between coal and gas only occurs in years when coal generation goes down and gas generation goes up. Second, by assuming that gas has displaced zero-carbon nuclear and hydropower in recent years rather than coal. Third, by assuming that all of the increase in US coal exports has been due to coal that has been displaced by gas. And finally by assuming that all US coal exports are additive to total global coal consumption rather than displacing other sources of coal. Only by making all four of these assumptions, none of which can be supported empirically, can CO2 Scorecard make the extraordinary claim that the shift in the US power sector from coal to gas has resulted in increased emissions.

Where last year’s CO2 Scorecard analysis focused on one year and looked at economy-wide emissions, the new analysis looks at the period between 2007 and 2012 and focuses solely on the power sector. The most straightforward way to do this would have been to simply look at the aggregate shift in coal and gas emissions between 2007 and 2012 and calculate the amount of coal consumption that gas generation has displaced. Between 2007 and 2012, coal generation declined by about 25 percent while gas consumption increased by almost 40 percent. All told, the increase in gas generation accounts for about three-quarters of the absolute decline in coal generation.

Instead, CO2 Scorecard uses year-over-year changes in the power sector mix to calculate the contribution that coal-to-gas switching has had upon power sector emissions, an analysis that manages to be simultaneously overly complicated and overly simplistic. The year-over-year data adds no more clarity while offering all manner of opportunity for mischief.

CO2 Scorecard claims that because coal generation grew in that year, no fuel switching occurred. But the claim is simply preposterous. Clearly, had cheap gas not been available, utilities would have run their coal plants more frequently and their gas plants less frequently – and there would have been fewer plants to burn that gas, as the years between 2005 and 2010 saw a boom in gas power plant construction as utilities realized that they could take advantage of new fuel supplies that were cheaper, cleaner, and more flexible than coal.

Of course, it is fair to observe that both simple year-over-year and aggregate calculations of fuel switching between coal and gas gloss over the complex ways in which prices, generation shares, and electricity demand interact. Addressing those shortcomings requires some accounting for how prices affect generation shares and electricity demand. Berkeley Earth’s Zeke Hausfather did exactly that, modeling monthly generation and emissions from 2005 through 2012 and comparing them with a scenario in which the gas revolution never transpired. In contrast to CO2 Scorecard, who claim that the gas revolution amounted to 86 million tons of reduced carbon dioxide emissions over 2007 to 2012, using Hausfather’s data I estimate emissions savings from coal-to-gas fuel switching at 764 million tons over the same period, or almost 10 times the emissions reductions alleged by CO2 Scorecard. 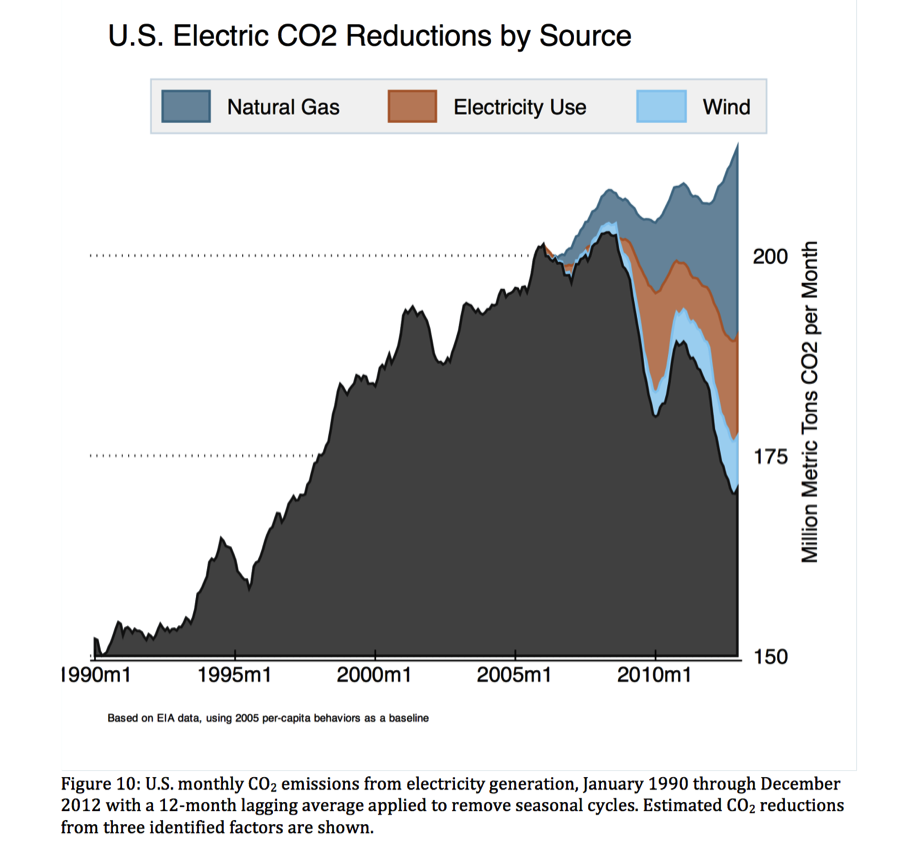 Using Hausfather’s data, we see that between 2007 and 2012 about 78 percent of the decline in coal generation was due to increased gas generation, about the same magnitude that a simple calculation of the aggregate shift in coal and gas generation finds as well. CO2 Scorecard, by contrast, estimates that coal-to-gas switching was responsible for 224 MWh, about 45 percent of the total 498 MWh decline in coal over 2007 to 2012 (leaving demand reduction responsible for the other 55 percent of coal’s decline).

Of course, to calculate the emissions impact of coal-to-gas switching in the domestic power sector, you have to estimate the emissions impact of whatever magnitude of coal-to-gas switching you have calculated. Here, CO2 Scorecard further weights the scales by assuming that declining hydro and nuclear were always displaced by gas, when falling demand or increases in coal or wind could also explain these declines. As a result, they claim that while gas was responsible for 45 percent of the reduction in coal-fired generation, it was only responsible for about 16 percent of emissions reduction in the power sector. Hausfather, by contrast, concludes that coal-to-gas shifting is responsible for over 50 percent of the reduction in power sector emissions. The Department of Energy, using different methods, reaches similar conclusions as well.

*DOE does not make estimates of the relative contribution of demand reduction/renewables, so they are represented equally here.

Unfortunately, CO2 Scorecard’s analytical chicanery does not end here. While they claim that increased gas generation accounts for less than half of the reduction in coal generation, they attribute all of the increase in coal exports to increased gas generation. One or the other of these two claims could be true. But it is literally impossible for both to be true. 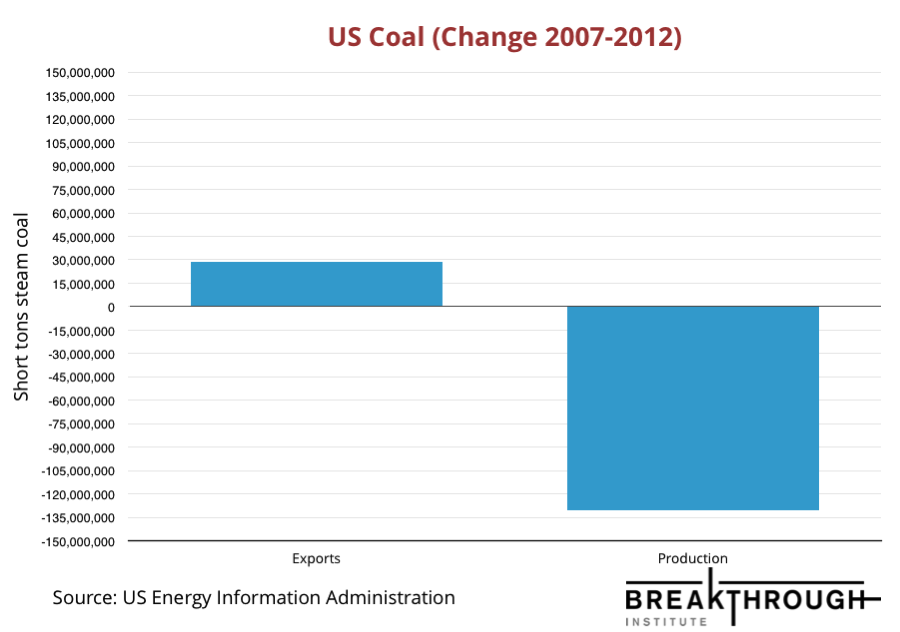 As CO2 Scorecard points out, US coal exports rose by 83 million short tons cumulatively over 2007 to 2012. This amounts to about an extra 149 million tons of carbon dioxide from US coal burned abroad (assuming 1.8 tons of carbon dioxide emissions for every short ton of coal burned). They attribute this increase entirely to the gas revolution, despite the fact that by their own reckoning, increased gas generation should only be responsible for 45 percent of the extra 149 million tons. Using their estimated proportions would mean that exported CO2 emissions due to the gas revolution were 67 million tons (149 times 0.45), less than the 86 million tons of domestic reduction for which CO2 Scorecard credits the gas revolution. But even this dramatically understates things.

Using Hausfather’s more defensible methods, actual domestic emissions reductions from coal-to-gas switching in the US over the same period were 764 million tons of carbon dioxide, as noted above. Assuming, as Hausfather’s results tell us, that 78 percent of coal’s decline is thanks to natural gas, we can determine what portion of the gas revolution’s domestic emissions benefits were actually eroded by exported emissions. Seventy-eight percent of 149 million tons is about 116 million tons of CO2, meaning that about 15 percent of the coal-to-gas domestic benefits are taken back from added exports. This is not insignificant, but it is far from the 173 percent that CO2 Scorecard lays at the feet of the shale revolution.

(NB: Since 55 percent of coal’s domestic decline is due to reduced demand, then by CO2 Scorecard’s own methods, demand reduction must be responsible for 82 million tons – 149 times 0.55 – of exported carbon dioxide emissions.) 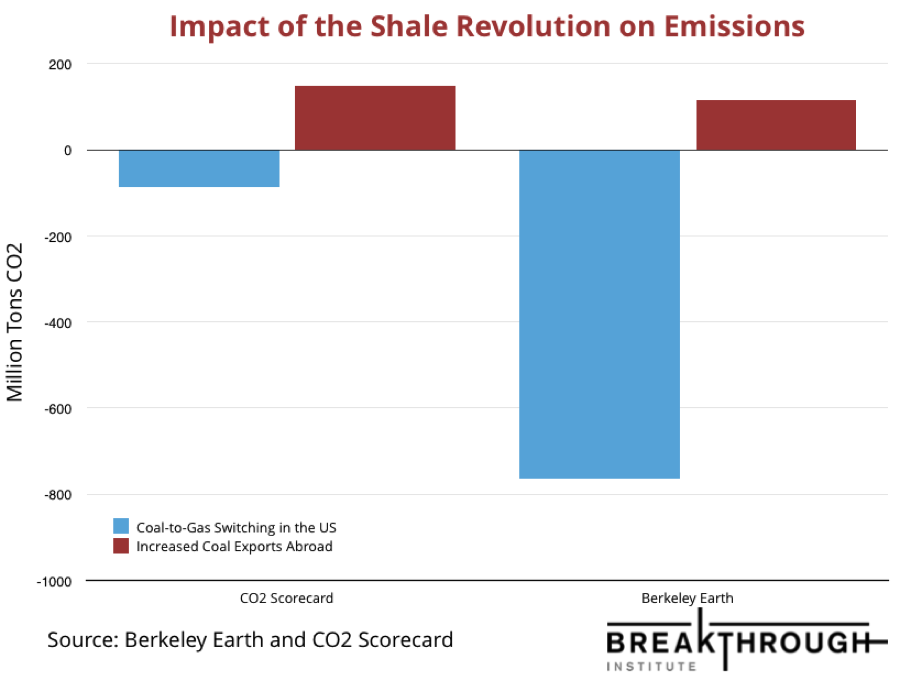 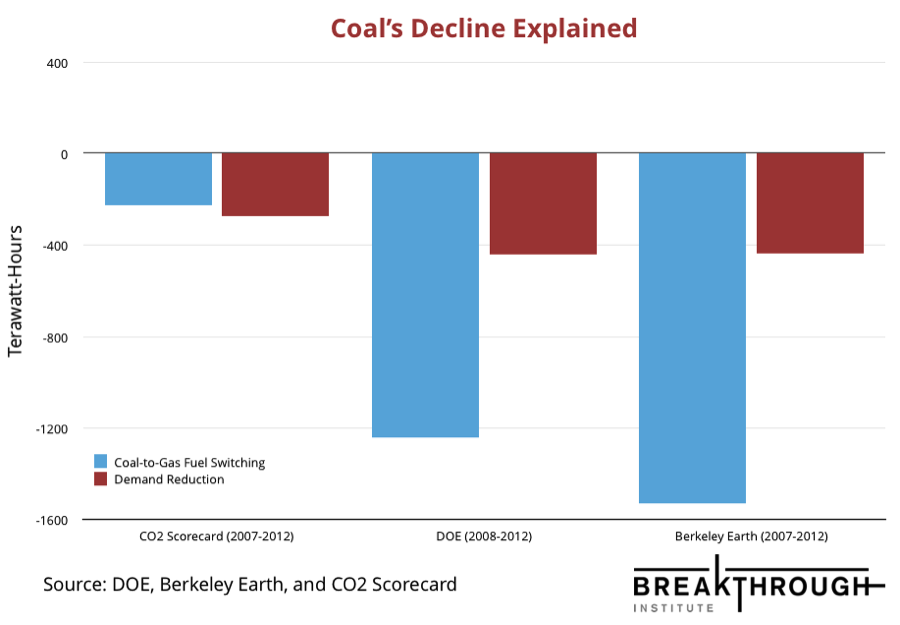 Coal Exports Are Not 100 Percent Additive to Global Coal Consumption

But that still understates the emissions reduction associated with coal-to-gas switching. That’s because CO2 Scorecard assumes that all increased coal exports are additive to global consumption, meaning that US exports result in higher total global coal consumption on a one-for-one basis, rather than accounting for the likelihood that US exports are displacing coal production elsewhere. Like most of their prior assumptions, this one simply doesn't pass the smell test. Global coal prices have been falling, due to excess production capacity. This has sparked a wave of mine closures around the world, from Australia to Indonesia to the United States. Indeed, were global demand for coal completely dependent upon the availability of coal, then reduced coal generation in the United States would have been matched by a correspondingly large increase in exports, which clearly it was not. It follows, then, that had US coal exports not risen by the amount that they did, that that demand for coal would have largely been met by other sources.

Lower coal prices clearly have made some coal mining enterprises uneconomical, hence mine closures around the world, suggesting that global coal production has presently outstripped demand. For CO2 Scorecard's claim to be taken seriously, the authors would need to first quantify the impact that increased US exports have had on global coal prices and then quantify the result that such a change in the global price would have upon coal consumption. To date, they have done neither.

Of course, in the end, achieving deep reductions in emissions will require that gas must be a bridge to lower-carbon energy sources, not an endpoint. But for now, emissions are declining and gas is displacing coal, which until recently, virtually everyone agreed was the most important climate mitigation objective. Moreover, an honest examination of the year-over-year changes in electricity generation shares would actually have yielded some promising news on this front. While gas has been displacing coal in the US power sector, it appears that renewables, especially wind, have been displacing gas. So perhaps gas is turning out to be the bridge fuel that we all thought it would be before everyone freaked out about fracking – something that an intellectually curious analysis of recent trends in the US power sector might have noticed.