If we, as a loosely cooperative set of nation states, really want to stop climate change, it would be nice to have some sort of historical success story on which to model our policies and actions.

I am not the first person to think this.

Climate change has been compared to efforts to address acid rain, the smoking epidemic, marriage equality, drunk driving, HIV/AIDS...the list goes on. It has been, in particularly heated moments, described as the next World War.

But in the seemingly endless search for historical comparisons, one omission stands out.

If responding to climate change is (mostly) about reducing anthropogenic greenhouse emissions to zero as soon as possible, then it’s (mostly) just about energy transitions: from high-carbon to zero-carbon. Energy transitions have happened before. One might think about studying them, not drunk driving or war, to better understand the climate challenge.

I wrote about this earlier this year in a review of Nicholas Stern’s recent book. I also tweeted as much earlier this week:

The smart responses I got all basically boiled down to “this time is different.” Sure we’ve moved from one energy fuel or technology in the past, I was told, but not at the scale or speed necessary to confront global climate change.

Paul Sabin, whose book I love, put it like this: 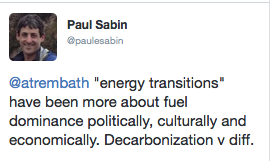 The idea here is that climate change is such a massive problem that we need to accomplish something that’s never been done before. Essentially, history does not provide any good lessons for approaching decarbonization.

The implication also seems to be that we need to move to lower quality energy sources--less “dominant” fuels, in Sabin’s terminology. Climate scientist Michael Tobis made a similar point: 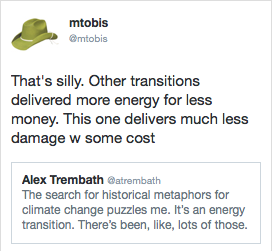 So climate change is different because the fuel transition needs to move towards relatively less dominant and/or more costly fuels.

I have a couple thoughts about this.

The first is to generally agree. Energy transitions have tended towards higher-quality and cheaper fuels in the past: wood-to-coal, whales-to-kerosene, horses-to-cars, coal-to-gas, etc. In contrast, moving from fossil fuels to zero-carbon fuels like solar, wind, nuclear, and hydrogen is harder because fossil fuels are amazing and solar, wind, nuclear, and hydrogen all have their issues (intermittency, capital costs, storability, miscellaneous infrastructural obstacles, etc.).

Sabin, Tobis, and others with whom I’ve had this discussion seem to think that overcoming the slow nature of energy transitions will require major policy action. I agree -- I happen to work for a policy think tank that focuses on environmental problems like climate change. But it’s not as if previous energy transitions occurred in a policy vacuum. The ongoing US coal-to-gas transition is the result of three decades of federal investment in fracking technologies (and is helped along by environmental regulations that penalize coal pollution). France’s nuclear grid was built by a deliberate national decision to move off of oil for generating electricity, and that energy transition remains one of the fastest forms of decarbonization ever.

So, after all that, I arrive back where I began. Energy transitions offer the best historical lessons for the energy transition we need to address climate change. The past can offer guidance over how to “aim” energy innovation to make solar, wind, nuclear, and other technologies closer to “dominant” over fossil fuels. The past can offer templates for policies that have delivered the most rapid and/or complete decarbonization.

And even so, the past might not tell us all we need to know about the future. But that’s not a reason not to study historical energy transitions. It’s a reason to learn as much as we can from them, instead of assuming there's no comparison to be found, or worse, grasping at straws for even weaker comparisons.