In a new report from the Breakthrough Institute Energy, we document the challenges facing American energy entrepreneurs seeking to commercialize advanced energy technologies to enhance US energy, economic, and environmental security. Innovative public policy solutions are needed to support private sector innovation and overcome the "valleys of death" that trap too many promising advanced energy ventures.

Download the full report, Bridging the Clean Energy Valleys of Death (pdf) here, and read on for the introduction to the report.

The United States faces an urgent national imperative to modernize and diversify its energy system by developing and deploying clean, and affordable advanced energy technologies. Domestically, developing new energy supplies and ensuring affordable energy prices will bolster American competitiveness and economic growth. Reducing the cost of advanced energy technologies is the key to finally ending a dependence on volatile global oil markets that holds the American economy hostage, compromises our foreign policy, and bleeds more than a billion dollars a day out of the US economy.

Abroad, the military has already begun deploying innovative clean energy technologies to reduce the high cost, paid in both lives and money, associated with transporting fossil fuels across war zones. Moreover, the impending risks posed by climate change compel the accelerated improvement and widespread deployment of low-carbon energy technologies. Countries around the world are already recognizing the critical need for new advanced energy technologies and are positioning themselves to lead the next wave of energy innovation.

Global energy demand is rising steadily, straining the ability of conventional energy systems to keep pace. For security, economic, and environmental reasons, the global energy system is thus modernizing and diversifying. Developing and developed nations alike are seeking new forms of advanced energy technologies that reduce dependence on foreign nations, insulate economies from volatile energy markets, and are cleaner and thus less costly from a public health perspective. Supplying this $5 trillion global energy market with reliable and affordable clean energy technologies thus represents one of the most significant market opportunities of the 21st century.

Despite this clear energy innovation imperative, the United States and the world remain overly reliant on conventional fuels and exposed to the price volatility and persistent public health impacts that reliance entails. The necessary course of energy modernization remains impeded by the high cost and barriers to scalability of today's clean energy technologies. These are barriers that only innovation can overcome.

However, two obstacles currently block the progress of energy innovation, obstacles which can only be addressed through effective public policy. Due to pervasive market barriers, private sector financing is typically unavailable to bring new energy innovations from early-stage laboratory research to proof-of-concept prototype and on to full commercial scale. This leads to two market gaps that kill off too many promising new energy technologies in the cradle. These gaps are known as the early-stage "Technological Valley of Death" and the later-stage "Commercialization Valley of Death." This pair of barriers is endemic to most innovative technologies yet is particularly acute in the energy sector. As a result, many innovative energy prototypes never make it to the marketplace and never have a chance to compete with established energy technologies. These valleys of death particularly plague capital-starved start-ups and entrepreneurial small and medium-sized firms, the very same innovators that are so often at the heart of American economic vitality.

In effect, the current lack of public policy to address this pair of barriers acts to protect today's well entrenched incumbent technologies from full market competition, while hamstringing American entrepreneurs and innovative ventures seeking to develop and deploy advanced energy technologies. The implementation of creative policies to effectively deal with the Technological and Commercialization Valleys of Death will foster vibrant competition in the energy sector and help drive technological innovation and job creation throughout the economy as a whole.

In the past, the United States has driven immense and far-reaching technological transformations. As the pioneering global innovator of the 20th century, the United States built the world's largest economy because of the ingenuity and creative enterprise of its entrepreneurs and citizens. Each step of the way, proactive public policy has played a crucial role in driving American innovations, from railroads and jet engines to microchips, biotechnology, and the Internet, unleashing long waves of economic growth and shared prosperity. New and advanced clean energy technologies afford the same opportunities to the United States today –– if public policy is shaped in a way that allows American innovators to thrive once again. 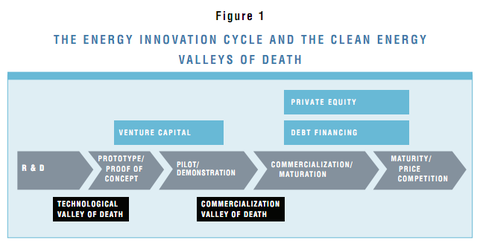