Lessons from Other Advanced Industries

What will it take to bring 21st-century innovation to the nuclear industry?

How to Make Nuclear Innovative, a new Breakthrough report, makes the case for an entirely new model of nuclear innovation. Instead of conventional light-water reactors financed and constructed by large incumbent firms, the advanced nuclear industry will be characterized by innovative reactor and plant designs, new business models, and smaller entrepreneurial start-ups.

The report draws on lessons from some of the most innovative industries in today’s economy. The recent successes of these sectors—wide-body aircraft, pharmaceuticals, commercial spaceflight, and unconventional gas exploration—indicate that a networked, bottom-up, privately led model would propel innovation and commercialization in the nuclear industry, allowing it to tap into the vast potential of the start-ups, national laboratories, universities, and venture capital that underpin innovation in the United States.

Prior to the congressional release of How to Make Nuclear Innovative, we sat down with leaders and supporters of advanced nuclear in attendance at Third Way’s 2017 Advanced Nuclear Summit and Showcase to discuss the importance of advanced nuclear, the challenges and opportunities that lie ahead, and the lessons that can be learned from other advanced industries. Watch our conversations here, and read the executive summary of How to Make Nuclear Innovative below.

If the nuclear industry once stood at the forefront of energy innovation, it is today rapidly losing ground. Global nuclear generation has fallen 9% since its peak in 2006, with closures outpacing new builds in many developed economies, and fossil fuels still cheaper and faster to deploy across the developing world. Even as climate change emerges as one of this century’s defining challenges, nuclear’s share of global electricity is declining. 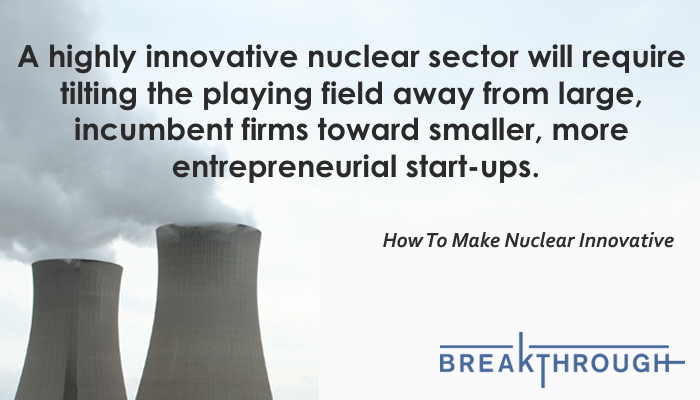 The next generation of nuclear plants holds promise to be cheaper, safer, more flexible, and faster to build than the current fleet. But the old model of innovation—state-led and top-down—stands in the way of commercializing such technologies. Dozens of advanced reactor projects in the United States and Europe have languished over the last 40 years; experimental projects across Asia, meanwhile, continue to depend on an outdated model of innovation. In order for new designs to meet the needs of deregulated markets in developed countries, and to outcompete cheap fossil fuels in the developing world, the nuclear industry will need to innovate in step with its technologies.

Doing so will require far-reaching changes to the nuclear industry itself, and to the public institutions, policies, and regulations designed to support it. To date, the nuclear industry has succeeded in making incremental improvements to large light-water reactor designs, resulting in reactors that operate more safely and at close to full capacity. While this model was once sufficient to support the development and growth of the industry, it has proven unable to support the kind of far-reaching technological innovation the sector now needs to compete with adjacent energy technologies.

A highly innovative nuclear sector will require tilting the playing field away from large, incumbent nuclear firms and toward smaller, more entrepreneurial start-ups. With its growing ecosystem of advanced nuclear companies, world-leading nuclear engineering programs and national laboratories, and extensive venture capital networks, the United States is well positioned to lead such a shift. Nevertheless, considerable barriers stand in the way of the development of an innovative advanced nuclear industry. Transformation of the industry will require significant policy reform.

The prospect of disruptive innovation within a highly complex technology industry, fortunately, is not without precedent. In this report, we examine four advanced industries with strong records of innovation: wide-body aircraft, pharmaceuticals, commercial spaceflight, and unconventional gas extraction. Each sector offers the nuclear industry its own lessons for developing and commercializing radically new technologies—the aviation industry, for instance, demonstrates the importance of smaller designs that allow for economies of multiples as well as stable demand. The recent transformation of biotech attests to the need for a diverse mix of firms and a staged licensing process. Commercial spaceflight, meanwhile, shows the benefits of an explicit shift to private-sector-led innovation, while the success of hydraulic fracturing owes much to the close collaboration of public and private organizations.

Based on these case studies, we draw a number of recommendations for modernizing nuclear innovation in the United States, including:

1. Licensing reform. Licensing of new nuclear technologies will need to be reformed in order to support smaller, entrepreneurial firms and to build investor confidence as key design and testing benchmarks are achieved.

2. Public-private partnerships. National laboratories will need to provide private companies with access to equipment, technical resources, and expertise in order to lower costs and promote greater knowledge spillover in the testing and licensing process.

4. Inter-firm collaboration. Policy and funding should be designed to encourage knowledge spillover and collaboration between companies.

Together, these changes would entail a reorganization of the nuclear sector that would be both far-reaching and long overdue, one that would drive the development and deployment of advanced nuclear reactors through bottom-up innovation, private-sector entrepreneurship, and targeted public investment. Without remaking the nuclear sector in this way, prospects for the sort of disruptive innovation that would assure nuclear energy an important role in the global energy future appear unlikely. There is unlikely to be a 21st-century nuclear renaissance without first creating a 21st-century nuclear industry.