A Response to Breakthrough's Essay on Precision Agriculture

Africa imports a staggering 83% of the food it consumes, though it holds nearly 50% of the land available worldwide. Amidst decades of crop yield increases in other parts of the world, sub-Saharan African agriculture stands out as less mechanized, low-yielding, and insecure.

Might the techniques and technologies that fed North America, Europe, and other regions in the latter twentieth century now feed Africa? “The Green Revolution has not yet reached every corner of the world,” write Linus Blomqvist and David Douglas in their new essay on precision agriculture. “Sub-Saharan Africa stands out as the region where farming has modernized the least.”

But it is precisely the approaches Blomqvist and Douglas advocate, among other innovations, that will allow Africa to largely leapfrog the Green Revolution. Its ambitions to feed itself will need to be shaped by a new paradigm that focuses on sustainable intensification led by precision farming.

A new study, Africa Agriculture Status Report 2016, by the Alliance for Green Revolution in Africa (AGRA) shows significant growth in African agriculture over the last two decades. This growth occurred in tandem with overall improvements in Africa's economic performance. The economic growth in turn helped to reduce poverty.

The first is sustained policy commitment at the level of heads of state. The key vehicle for this was the 2003 adoption of Comprehensive African Agricultural Development Programme (CAADP) whose remit was expanded by the 2014 Malabo Declaration. The AGRA study shows that countries that implemented the CAADP principles also recorded higher agricultural productivity. 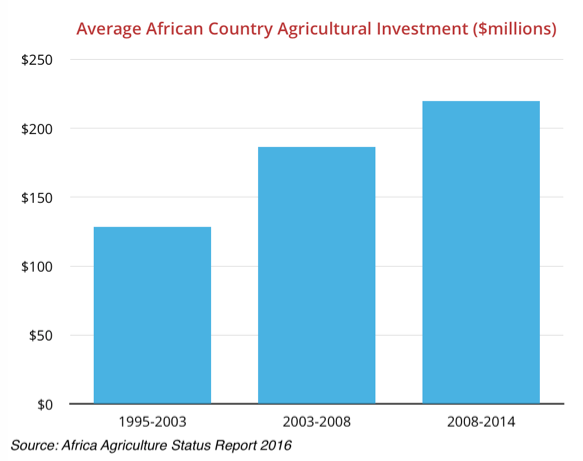 Sustaining African agricultural transformation will require national policy approaches which emphasize the need to transition toward sustainable agriculture. More specifically, they will need to pursue strategies that allow for the integration of precision agriculture in existing farming methods. Such policies could focus on six key elements: biological diversity; ecology and emerging technologies; infrastructure; research and training; entrepreneurship and regional trade; and improved governance of agricultural innovation.

First, African food systems have been heavily influenced by the need to meet the calorific requirement of the people. Hunger, for example, is still largely measured by calorific intake. This focus has tended to emphasize cereal production and import at the expense of other food sources.

There is renewed emphasis on meeting the nutritional needs of the people. This could lead to renewed research on indigenous crops and breeds that have historically been neglected. The research using tools such as precision breeding or gene editing would also involve the conservation of agricultural biodiversity. Many African communities still use such local crops and animal breeds. Their participation in new research programs would be essential for their success.

Second, the history of global agriculture is dominated by examples of extensive ecological destruction. This was partly because of the limited number of technologies and farming methods in use. Africa has access to a much larger pool of technological know-how that can help to promote leapfrogging in sustainable agriculture.

In Nigeria drones are being used to map the potential for expanding rice cultivation. For example, in 2015 the UK-based GrowMoreX Consultancy Company carried out a survey of nearly 3,000 hectares of land suitable for irrigated rice production in New Bussa (Niger State), an area 700 km away from the capital Abuja. The area has “limited access to roads, electricity, clean water, and other amenities.”

The collective impact of agricultural innovation is likely to shift the distribution of winners and losers. The debate over transgenic crops is an example of such social responses to innovation. As I argue in Innovation and Its Enemies: Why People Resist New Technologies, inclusive innovation strategies are needed to reduce the negative impacts of innovation. Special attention needs to focus on the role of women who account for the largest share of farm workers.

Third, infrastructure investments (especially transportation, energy and irrigation) are essential for sustainable agriculture. The AGRA report acknowledges that a “10 percent decrease in rural transport costs can generate a 25 percent increase in the quantity of food traded.” Transport is only one aspect of infrastructure. Reliable energy, for example, is key for the creation and growth of agro-industries.

Similarly, irrigation is essential for crop production. Only about 4% per of African agriculture is irrigated whereas the share is 45% in Asia and 18% for the world agriculture. Cost reductions in the production of solar photovoltaics are making it a viable option for irrigation in many parts of Africa. Uganda, for example, is positioning itself to be a regional leader in solar irrigation.

Infrastructure investments are also linked to building up engineering capabilities that can be deployed in the wider economy. Building such capabilities entails strengthening technical training in universities. Even more critical is forging close linkages between universities and agricultural communities.

Fourth, investing in research and extension to support to farmers, especially women, is critical to sustainable agriculture. This raises the issue of Africa’s common separation between research (conducted mainly in national Institutes) and teaching (undertaken in universities). There is a need to reform the system of higher agricultural education to bring research, teaching, extension and commercialization under more integrated innovation universities.

The creation of the Tripartite Free Trade Area (TFTA) has created a market of over 300 million people in 26 countries valued at $1.5 trillion. Africa is negotiating a Continental Free Trade Area covering a billion people in 54 countries with a combined GDP of more than US$3.5 trillion. Agriculture could be one of the earliest beneficiaries of this market. The market will not only cover produce but it will also provide opportunities for trade in agricultural machinery and the associated services. Technologies and services for precision agriculture will be part of this market.

Countries around the world have responded to the need for up-to-date information by creating science and technology advice offices to complement the work of economic advisors. African presidents and prime ministers need to have similar knowledge support offices. Otherwise they risk making decisions that are not supported buy the best advice they can have.

The AGRA report has confirmed shows that it has taken close to two decades to start seeing the results of the impact CAADP principles. This time frame is consistent with earlier efforts by countries such as Brazil, India and China.

It shows that growing agriculture in particular and the economy in general requires long-term policy consistency and financing. It also involves viewing economies as integrates systems driven by interactions between different sectors. Future successes will depend largely on how effectively agricultural initiatives will be guided by sustainability principles in general, and precision agriculture in particular.