Limiting Population Growth Is Not the Answer to Global Warming

‘Elephant in the Room’ Has Weak Relationship to Greater Carbon Emissions

Getting people to produce fewer babies – they already are – is a far less important challenge than getting them to consume and produce energy more rationally. It is time we worried more about rich people driving luxury cars than poor people having more babies.

Uncertainty. Those skeptical about whether climate change is occurring and that we should do something about it are rather fond of it. Uncertainty of course goes in two directions and the rather one-sided interest of many of these so-called skeptics betrays their lack of genuine skepticism. We are now being told that we should relax a little because the sensitivity of the atmosphere to the carbon dioxide we are dumping in it might be slightly lower than we previously thought. Even if this were true, to relax would be to ignore the whole equation. Consider this rather simple fact. In 1998 the International Energy Agency issued a forecast for China's carbon dioxide emissions in 2010 and 2020. These emissions were expected to be 5.3 billion tonnes in 2010 and 7 billion tonnes in 2020; instead China was already emitting over 7 billion tonnes of carbon dioxide as early as 2009.

The Kyoto Protocol was signed in 1997, and the impact of it on the global energy system was insignificant. Since 1997, the world has seen a surprising and unpredicted return to coal. Forty-three percent of the increase in global primary energy consumption between 2000 and 2010 was in coal. In the 1990s it was only 10 percent. There is over 1.2 TW of new coal power plants planned globally, a figure almost two times higher than China's current capacity. And as for the regular wishful nonsense we now read about China taking serious efforts on climate change, consider that it is now building large numbers of plants that convert coal to synthetic gas, which will have even higher carbon dioxide emissions than simply burning the coal. The world is now carbonizing much faster than expected, so if there is lower sensitivity of the atmosphere to carbon dioxide we seem to be in much the same spot as before.

There is much to be uncertain about, but one thing we can be relatively certain of is that we are much more uncertain about levels of future carbon dioxide emissions than their potential impacts on the atmosphere. And aren't climate change "skeptics" also people who tend to be very doubtful about our ability to reduce emissions? This point can be labored a little further, but I will instead turn to what I actually want to discuss: the role of population growth in driving future carbon emissions.

There are now seven billion people living on earth, a number that is inevitably going to increase this century. More people equals more carbon emissions, and in the eyes of some we should be doing much more to stop increases in population. It has now become rather clichéd to call this subject the elephant in the room, as it has become a cliché to open a piece about population growth by mentioning the disproportionate number of emails you have received on the subject (a probable reason for many avoiding the subject).

Any discussion of a complex issue requires clarity up front about what is actually being discussed. What follows is a discussion about population growth, not absolute population levels. In trivial terms the environmental problems we face would be much easier to solve if there were a few hundred thousand, or a few million, humans on the planet. However we cannot act as if history did not occur. There are seven billion of us and we need to honestly appraise what can be achieved by limiting our numbers in comparison with other approaches.

To clarify the discussion I will focus on two of the key drivers of global carbon emissions from energy production (and in turn our overall environmental impact): population growth and changes in patterns of consumption. The atmosphere does not care whether we have energy democracy (a curious concept, in general it is the rich who benefit) or generate energy locally (another curious concept, a solar panel made in China is not local) the essential element is how much pollution we dump into it. With this in mind I will focus purely on the subject's quantitative aspects, and will return to the qualitative aspects in a future piece.

A simple thought experiment. Imagine that global population increases this century as expected, or at least as the UN's Population Division expects it to, and that the citizens of each country continue to produce carbon dioxide emissions as they do today. This simple scenario is a dreadful way to forecast the future of carbon emissions – they all are – but is a valuable illustration of why a single-minded focus on population growth is misplaced.

Global population increases from 7 billion to 10.5 billion in 2010 (in the UN's central scenario), an increase of 50 percent. 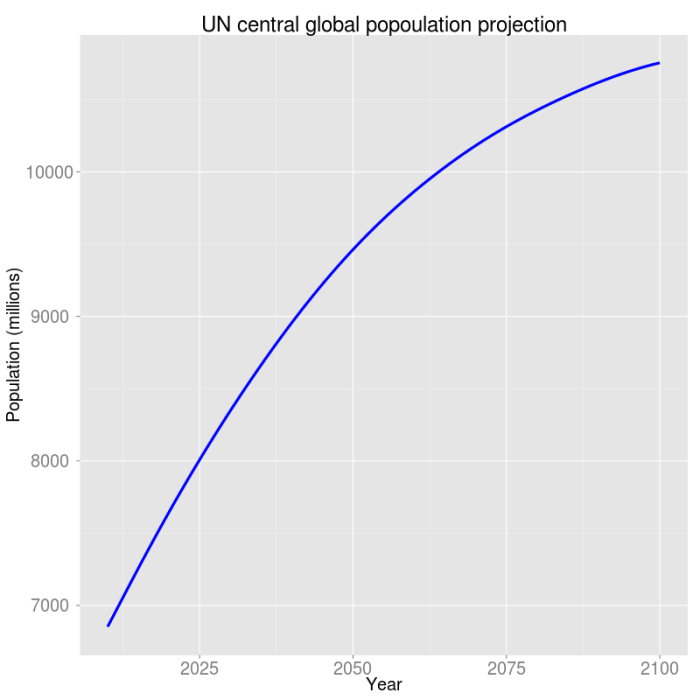 Carbon dioxide emissions however do not increase throughout the century. Instead they peak mid century, a peak that is only 15 percent higher than today. The reason for this is that the populations of many large emitters are now expected to be in decline by mid century. China, Japan, Germany, South Korea, Russia, and Brazil are among the fifty-five countries expected to have declining populations by 2050. 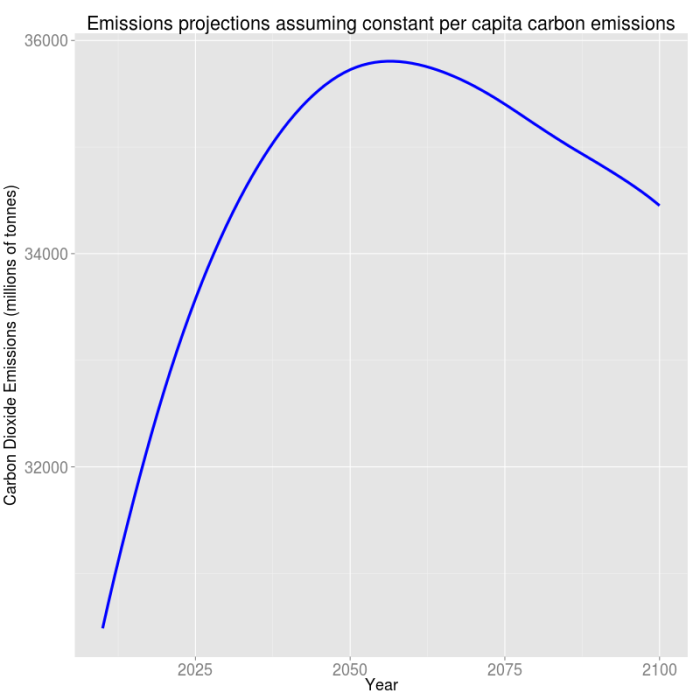 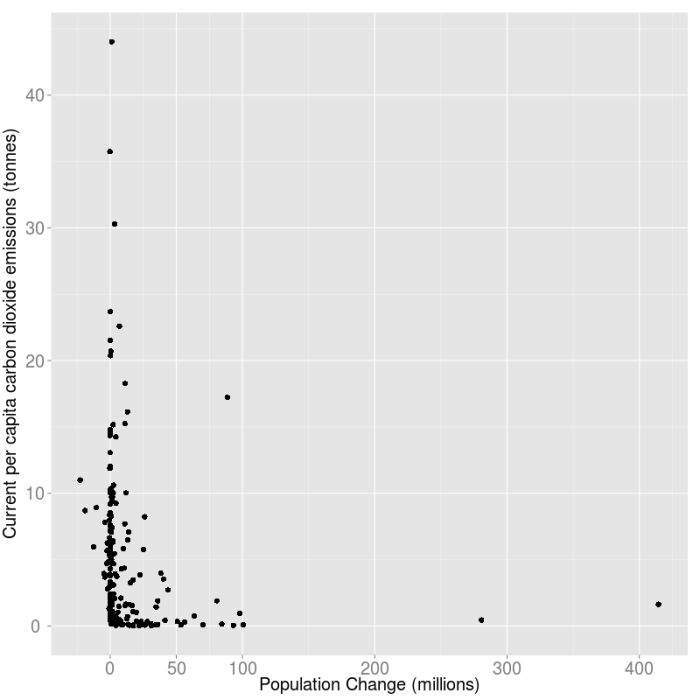 The long-term existence of human populations has certain fundamental requirements. Among them is that enough babies are born to replace dying adults, commonly referred to as replacement fertility. The exact number varies slightly; it is thought to be approximately 2.1 babies per woman for developed countries. However, it is rather clear that women need to produce at least two babies on average to prevent long-term population decline and eventually extinction. 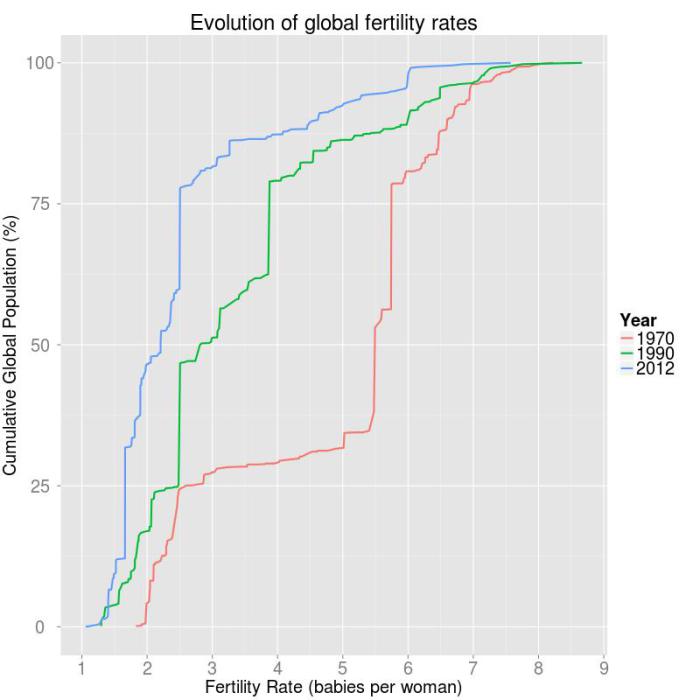 Disparities in global commercial primary energy consumption are profound and saddening. More than half of commercial energy is consumed by less than 20 percent of the global population. Another saddening detail is the 10 percent of countries that consume essentially zero percent of global primary energy. These are countries where commercial energy consumption is so low that major energy statistics centers do not bother collecting data for them. It should be an uncontroversial statement that the graph below straightens out significantly in future. 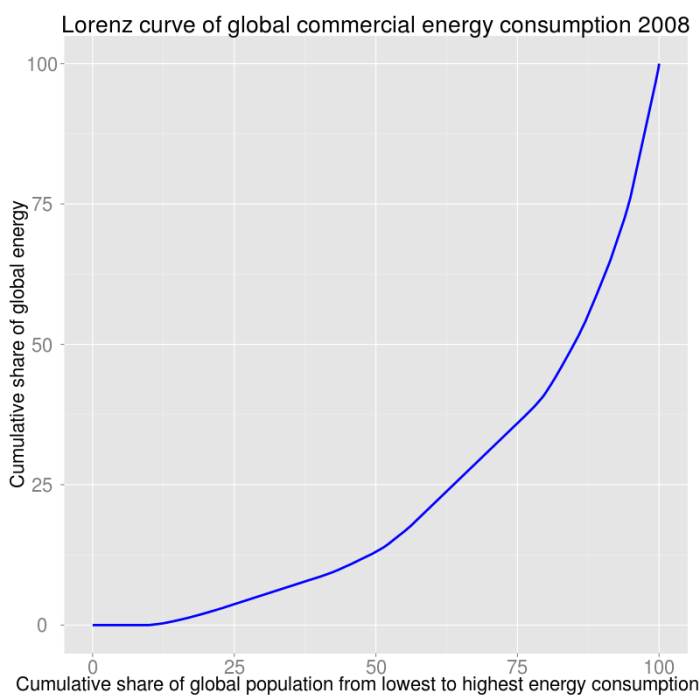 A more or less identically shaped graph can be drawn for the global distribution of greenhouse gas emissions. A simple and obvious conclusion is that you could remove about a quarter of the global population without any significant impact on carbon emissions. Again, this needs to be considered when we are weighing up the influence of future population growth.

The Weak Relationship Between Population Growth and Carbon Emissions Growth

Throughout the last 100 years population has increased continually in almost every country, as have carbon dioxide emissions. However the relationship between the two is surprisingly weak. I show this relationship below for the period between 1998 and 2008. 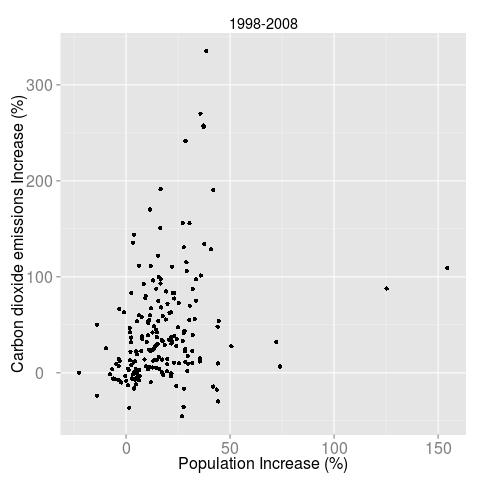 Compare the United States and Canada on the one hand and France and Sweden on the other. No one could possibly claim that the lives of North Americans are objectively better than those living in France or Sweden. In fact a more objective comparison would indicate the opposite. North Americans don't live longer, aren't healthier and aren't more educated. However, last year the average North American produced three times more carbon emissions than the average French or Swedish citizen.

These stark differences have two simple causes. North Americans consume excessive levels of energy – think of those Hummers going from red light to red light in cities – and France, Sweden, and Switzerland have largely decarbonized their electricity supply. And differences in energy consumption extend to almost all modernized countries. North Americans consume two times more energy than those living in most other modernized countries, yet the evidence of any benefits of this excessive consumption is non-existent.

However significant long-term declines in carbon emissions in the eyes of some American climate change "skeptics" are going to lead to inevitable declines in quality of life. Yet if North America simply consumed and produced energy like France and Sweden its emissions would be three times lower. I don't imagine it would be so bad to live a Swedish lifestyle. If you ignore political incompetence, ignorance – how many people actually realize how excessive North American consumption is – and greed, then it should not be that difficult to reduce North American per capita emissions to French levels in a few decades. Discussions over whether massive technology breakthroughs are needed for the US to significantly reduce its carbon emissions come across as a rather curious sort of American exceptionalism, at least from this side of the Atlantic.

In conclusion getting people to produce fewer babies is a far less important challenge than getting them to consume and produce energy more rationally. Now this is not to say we should do nothing about population growth. However the principal arguments for reducing birth rates are no longer environmental. The improvement of female education, reduction of infant mortality and dismantling of reactionary religious attitudes are desirable in themselves and will inevitably lead to significant long-term reductions in fertility. The promotion of the demographic transition around the world is a necessary one on simple humanitarian grounds, and recent trends indicate that this is being very successful. The same cannot be said about our attempts to limit greenhouse gas emissions.

Why population policy will not solve climate change by Barry Brook

The Unprecedented Shift in Japan’s Population: Numbers, Age, and Prospects by Vaclav Smil

Getting Better by Charles Kenny

Are there too many people on the planet? by Peter Kareiva

Robert Wilson is a PhD Student in Mathematical Ecology at the University of Strathclyde. This post originally appeared on his blog The Energy Transition.