Writing at the Huffington Post UK, Melissa Leach, director of the STEPS Centre at Sussex University, asks a provocative question:

When the cover of the Economist famously announced 'Welcome to the anthropocene' a couple of years ago, was it welcoming us to a new geological epoch, or a dangerous new world of undisputed scientific authority and anti-democratic politics?

The occasion for raising this question was Leach's participation last month in a United Nations meeting of experts on the development of new sustainable development goals. Leach describes a meeting in which scientific authority was invoked as the basis for closing down debates over policy and asserting the preeminent roles of experts in charting a course for future global development.

This meeting – and many others like it in the run up to September – raise a significant question: Is there a contradiction between the world of the anthropocene and democracy? The anthropocene, with its associated concepts of planetary boundaries and 'hard' environmental threats and limits, encourage a focus on clear single goals and solutions. It is co-constructed with ideas of scientific authority and incontrovertible evidence; with the closing down of uncertainty or at least its reduction into clear, manageable risks and consensual messages.

This is a far cry – as a South African participant pointed out – from some other worlds: on the ground in the global south and north, where people and social movements debate and contest their interests, values and desired futures; and the world according to democratic theory, in which such politics are worth acknowledging and respecting. In this world, there is a need to open up, make uncertainty and ambiguity and dissensus explicit, and foster diversity to cope with it.

The basis for the power grab by the experts – really old wine in new bottles – is the fashionable idea of "planetary boundaries" which holds that there are hard and fast ecological limits within which human activity must be constrained. The concept is much contested scientifically -- such as in this excellent review by my colleagues at The Breakthrough Institute.

However, as an instrument of scientific authority in political debates the concept of planetary boundaries could not be more perfect. Frank Biermann of VU University Amsterdam, explains (here in PDF):

Since the assessment of planetary boundaries is inherently political, scientists involved in this process become inadvertently also political actors. This raises fundamental questions about the legitimacy and accountability of scientific assessment processes . . .

For the proponents of planetary boundaries as political authority, issues of legitimacy and accountability are easily dealt with through the incontestable authority of science. Consequently, they argue that the traditional conception of sustainable development as a challenge of trading off competing values – environmental, social, economic – needs instead to be rethought in hierarchical terms. They explain and illustrate the need as follows (from this recent paper in Nature in PDF): 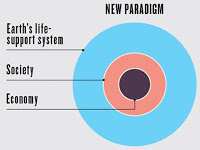 We need to reframe the UN paradigm of three pillars of sustainable development — economic, social and environmental — and instead view it as a nested concept.

In the hierarchical axiology, the trump values are defined by the planetary boundaries.

Who, you may ask, is responsible for identifying and enforcing those values? Why, the experts, of course. The power implications of planetary boundaries were spelled out explicitly by several of its leading advocates as follows:

Ultimately, there will need to be an institution (or institutions) operating, with authority, above the level of individual countries to ensure that the planetary boundaries are respected. In effect, such an institution, acting on behalf of humanity as a whole, would be the ultimate arbiter of the myriad trade-offs that need to be managed as nations and groups of people jockey for economic and social advantage. It would, in essence, become the global referee on the planetary playing field.

The political model that underlies the power grab of scientists is one of "trusteeship," a form of which was described by PIK's John Schellnhuber, an early advocate of the planetary boundaries model of global politics, in Der Spiegel:

Ultimately only democratic societies will be able to master this challenge, notwithstanding their torturous decision-marking processes. But to get there perhaps we'll need innovative refinement of our democratic institutions. I could imagine assigning 10 percent of all seats in parliament to ombudsmen who represent only the interests of future generations.

An expert body of the German government memorialized the political philosophy in a comic book (illustrated below, here in PDF), complete with the scientist (Schellnhuber himself in this case) symbolically above the policy maker, describing a planetary boundary condition and as a consequence, President Obama in the panel below expressing concern that action is needed.

Image from a comic book prepared by an official advisory committee
to the German government illustrating how the committee views its
relationship to policy.

A real-world example of the implications of the planetary boundaries political philosophy is vividly seen through the issue of global energy access. Future global development, at least in the short term, necessarily will involve trade offs between expanded use of carbon-emitting fossil fuels and the expansion of energy access to the world's poorest. The planetary boundaries advocates, consist with their hierarchical values framework, call for "universal clean energy" and recommend development targets focused not on measuring expanded energy access, but rather carbon dioxide emissions (here in PDF).

In other words, expanded energy access to the world's poorest is deemed acceptable only if it first satisfies the demands of planetary boundaries – in other words, the political demands of the scientists couched in the inviolable authority of science. As Shellenhuber explains:

I have nothing against economic growth, as long as it does not break through the planetary guardrails.

In a recent essay, Nico Stehr, of Zeppelin University, characterizes dissatisfaction about democracy among climate experts, and explains the general underlying perspective:

Consensus on facts, it is argued, should motivate a consensus on politics. The constitutive social, political and economic uncertainties are treated as minor obstacles that need to be delimited as soon as possible - of course by a top-down approach. . . the discourse of the impatient scientists privileges hegemonic players such as world powers, states, transnational organizations, and multinational corporations. Participatory strategies are only rarely in evidence. Likewise, global mitigation has precedence over local adaptation. “Global” knowledge triumphs over “local” knowledge. . . the sum of these considerations is the conclusion that democracy itself is inappropriate, that the slow procedures for implementation and management of specific, policy-relevant scientific knowledge leads to massive, unknown dangers. The democratic system designed to balance divergent interests has failed in the face of these threats.

Stehr's explanation aptly summarizes the play book used by the experts at the United Nations meeting described by Leach in their efforts to assert authority over high level decisions on the future course of global development. Leach ends her essay with an ominous warning:

The human rights and well-being that are under threat in the anthropocene may prove not just to be material rights to food, water and energy, but also rights to voice, priorities, perspectives and culturally-embedded ways of life.