How long the night the dawn will break. Such is the saying – often quoted as an African proverb – attesting to the virtues of patience and perseverance. However, it also serves as an allusion to Africa’s gaps in infrastructure, particularly for electricity generation, transmission, and distribution. As the well-known satellite photos of Africa at night show, very little of sub-Saharan Africa’s vast expanse is illuminated, so the nights are long indeed.

The data bear out what the image shows. According to the Infrastructure Consortium for Africa, per-capita electricity consumption for the 1 billion inhabitants of sub-Saharan African is 124 kilowatt hours per year. That’s roughly the equivalent of a single, standard light bulb providing four hours of illumination per day for a year and is just 1% of equivalent per-capita electricity consumption in high-income countries.

Sub-Saharan Africa’s electricity production is optimistically 68GW, about the same as the energy generation capacity of Spain. And that is an optimistic estimate. Up to one quarter of the generation capacity may be functionally obsolete or unavailable. Even if fully functional, this capacity represents only 4% of global electricity production. Furthermore, approximately 45GW of that generation capacity is based in South Africa, meaning its northern neighbors represent only a third of this total capacity. Where electrical power is available in sub-Saharan Africa – only approximately one-fifth of the region has access to electricity – it is expensive and frequently unreliable, often relying upon uneven transmission and distribution infrastructure and pricey oil-based energy feedstocks.

Describing Africa’s energy consumption in terms of gigawatts tells part of the story, but it may not adequately express how much all aspects of life and work across the continent are constrained by such limited power supply. It limits agricultural production, the delivery of quality healthcare, small business activity and overall economic growth. At a time of such promise for Africa, when so many regions are seeing strong growth and a growing middle class, an increased supply of reliable electricity is essential to sustaining and extending Africa’s recent progress.

Power Africa’s Next Wave of Growth

As the proverb says, dawn must break. After years of missed opportunities and missteps, there is momentum from many Sub-Saharan nations and the international community to make meaningful progress in electrification investments.

One recent example of this momentum is the US Power Africa initiative, announced by President Barack Obama in June. Part of Power Africa is a commitment of $7 billion from multiple US government agencies, including the Overseas Private Investment Corporation (OPIC), to assist African countries in doubling access to electricity by supporting the development of newly discovered resources responsibly, building out power generation and transmission, and expanding the reach of mini-grid and off-grid solutions.

Under this administration initiative, the United States and its partners will work with Power Africa partner countries, focusing initially on Ethiopia, Ghana, Kenya, Liberia, Nigeria, and Tanzania to achieve ambitious goals in electric power generation and utility and energy sector reforms. Power Africa will involve coordinated efforts of the US Agency for International Development, the US Export-Import Bank, the Millennium Challenge Corporation, and the US-African Development Foundation and OPIC, and will seek to leverage private sector expertise and investment capacity via technical support, long-term debt financing, political risk insurance, export credits and other investment support mechanisms.

At the time of the President’s announcement and further to the commitments pledged by the US government, international, and local partners for Power Africa announced $9 billion in commitments for up to 8,000MW of power investments. As the US government’s development finance institution, OPIC has a long history supporting energy and infrastructure projects in Africa and also catalyzing private sector investment in projects throughout the continent, which will enable it to play a key role supporting a range of power projects needed to achieve such ambitious goals.

And while these targets are indeed ambitious, they are ultimately only a down payment to the more than $300 billion in investment estimated by the International Energy Agency as being required for Africa to achieve universal electricity access by 2030.

Historically, sub-Saharan Africa has not been without financing support. OPIC, as a principal provider of long-term financing and insurance risk mitigation for emerging market private sector investment, has worked closely with its partners to expand its contributions to the continent. As a result, sub-Saharan Africa is the largest geographical concentration for the agency, representing more than 20% of OPIC’s $18 billion portfolio at the end of fiscal year 2013. Indeed, transaction volumes for African project finance from all providers have been reasonably robust, with approximately $17 billion of transactions in 2012 (a 10-year high) and $12 billion by the first half of 2013.

But, for a long time global appetite for project finance in Africa was strongly concentrated in natural resource production and processing. Ghana and Nigeria have been the most active countries in raising project-specific debt by volume share since 2010 and during the same period two-thirds of the activity has been concentrated in mining, oil, and gas, refining, or natural gas processing.

The recent past has shown a shift away from that trend and suggests that the future may be quite different for Africa.

Power generation – particularly that powered by renewable energy – received a significant boost in 2011 and 2012 through the early success of the first two rounds of South Africa’s long-awaited Renewable Energy Independent Power Producers Procurement program. Featuring a highly disciplined policy design, some of Africa’s strongest counterparty credit risks, and substantial in-country and official lender appetite to supply local-currency long-term debt financing, the program has been held up not only as a regional but a global success story in mobilizing a sensible array of wind, photovoltaic, and solar thermal projects.

However, moving from the investment grade rate environment of South Africa into the sub-investment grade (or unrated) countries of the region increases considerably the degree of difficulty in attracting capital providers for power and other infrastructure. National utility companies, the typical power purchase agreement counterparties, are frequently systemically weakened by negative spreads between the cost of energy and the controlled retail price; payment arrears are not unusual; and system losses are generally fairly high due to low transmission and distribution investments and low collection rates. From a capital formation perspective, local financial institutions are not well positioned to support the type of long-dated term debt generally sought to match the long-lived nature of power generation assets.

Some sub-Saharan nations have embarked on ambitious reform programs to address these systemic weaknesses. Nigeria has been among the most active since 2005 with a federal government-initiated unbundling and privatization process linked to the creation of a new electricity regulator, the introduction of a multi-year tariff order, and the organization of a national transmission company with a new three-year management contract with a Canadian operator, and a special power trader, Nigeria Bulk Electricity Trading Plc or NBET.

Nigeria has sold majority equity stakes in a number of its local distribution companies and generation companies through 2013, while establishing capitalization, revenue, and payment security mechanisms for NBET designed to assure timely payment of PPA obligations. As this program gains momentum, Nigeria is on the path to add more than 5GW of new gas fired power generation capacity and progress a number of new independent power projects to address the peak demand of 40GW that is forecast for 2030. Key challenges remain in developing confidence around transparency, governance, and the financial stability of NBET as the designated offtaker for potential private power providers.

Kenya features a reasonably well-developed power market with a strong government action plan to continue its growth in power capacity additions and to introduce generation diversity in the form of renewable energy. With a target of an additional 15GW by 2030 – of which 5GW are to be commissioned by 2017 – over its current installed capacity of just under 2GW, the country is looking to wind, geothermal, and additional thermal and other sources to improve upon its relatively low installed base of generation sources. Kenya features an independent judiciary and a strong legal framework, with a well developed financial infrastructure. With these elements, Kenya is seen as a strong candidate for broad generation and energy infrastructure growth.

Other compelling candidate nations for near-term, private sector-supported generation growth include Ghana, Botswana, and Zambia; each of these countries is generally perceived as offering a good mix of governance, regulatory robustness, and financial capability to support energy infrastructure investments. Other nations, including the Power Africa partner nations of Ethiopia, Liberia, and Tanzania, have recognized or are working to address obstacles to the substantial external investments needed to advance critical energy infrastructure. These obstacles include unsustainable tariff regimes imposed on national utilities, legacies of underperforming statist programs or conflicts, and uneven recognition of property and contractual rights.

In the meantime, local, regional and international financial institutions are also working to address their own challenges, particularly in providing effective currency risk mitigation for these essentially domestic ventures and in providing the longer duration support in a historically more volatile continent.

OPIC seeks to be a key contributor of financial solutions to this call to action, and has pledged to commit at least $1.5 billion to support power sector transactions in sub-Saharan Africa as part of the overall Power Africa program over the next five years. This builds upon its current $1 billion of finance and insurance commitments in sub-Saharan Africa, supporting 530MW of generation in countries from Kenya, where OPIC financing has supported expansion of a major geothermal power plant, to Togo, where a 100MW ContourGlobal power plant built with the support of OPIC financing and political risk insurance has tripled the country’s energy production, reduced the need to import fuels, and significantly reduced rolling blackouts.

With the combined efforts of the public and private sector Power Africa partners, brighter mornings – and nights – will be nearer for many more Africans. 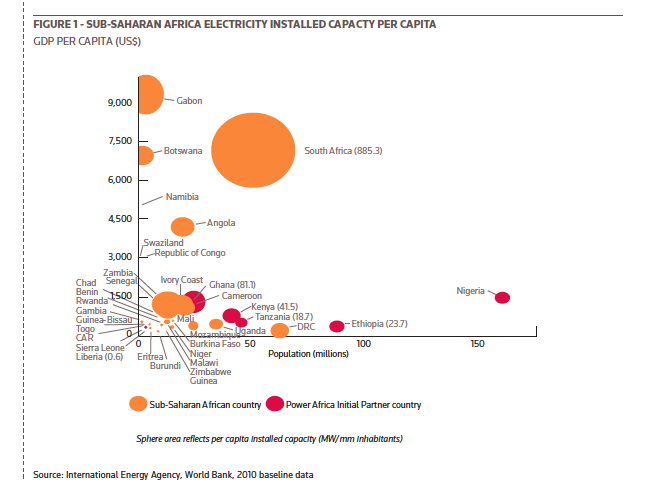 Michael Whalen is Vice President of Structured Finance at the Overseas Private Investment Corporation. This essay was first published in the 2013 Project Finance International Yearbook, and is reprinted with permission.