The landmark Waxman-Markey 2009 American Clean Energy and Security Act was introduced in the House this afternoon (May 15, download PDF here), and the Breakthrough Institute has performed a preliminary analysis of how it would invest over $1 trillion in cap and trade revenue between 2012-2025. Our key findings for this period include (all numbers are approximate -- download spreadsheet here):

How much money would these allocations translate into? That depends on the average price for each pollution allowance. The EPA's initial price estimate was $13-22 per allowance between 2015 and 2020, and has since revised that downward by at least 10% (to $12-20 per allowance) as the bill was weakened and additional offsets were permitted. We will assume here an average price of $15 per allowance. In that case, the allocation would look like this (click images to magnify):

Our analysis finds that Waxman-Markey would spend about $9 billion annually on a range of things that could generously be classified as technology innovation. By contrast, the legislation would give $32 billion to utilities, $9 billion to heavy industries, and $11 billion to low-income consumers annually. This $9 billion is far less than what Obama promised ($15 billion) and far less than the $30 billion that three dozen energy scientists and experts, including several Nobel laureates, called for in a sign-on letter during the fall of 2007. The large allowance giveaway to polluters also stands in contrast to Obama's previous calls for a 100% auction, which was included in his final budget proposal.

Of course, these funding levels assume a price of $15 per allowance. Some analysts, including Joseph Romm of Climate Progress, expect the bill to maintain a low price of $5-10 per allowance for the first several years. If the price was $10 from 2012-2025, the average annual investment in all areas generously classified as energy innovation would be $6 billion. This table compares clean energy investments for $10 per ton vs. $15 per ton:

To sum it up, this chart represents the first table above, including all allocation percentages and cumulative funding levels: 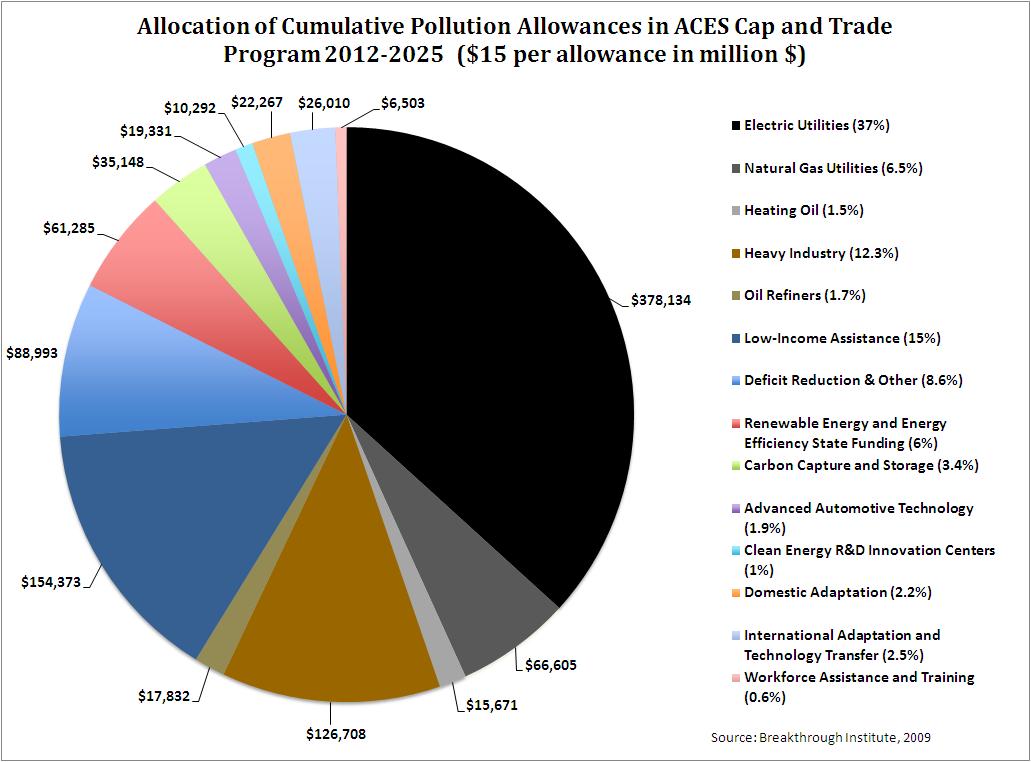