The Hypocrisy of Western Greens on Energy Poverty

Imagine the United States sending low-calorie food aid to Ethiopia in response to the global obesity epidemic. Absurd, right? Even if global waistline trends are worrisome, Ethiopians didn't create the problem. Such a policy would be futile since it would have no noticeable impact on the global aggregate.

Worse, while obesity may be a very real concern, Ethiopians are understandably more focused on undernourishment. The United States should aim instead to increase caloric intake in that part of the world. To punish those we should be helping when we can't even tackle the obesity problem at home makes the policy not only misguided, but also morally dubious.

Sadly, that is pretty much what the United States does on energy. In response to rising global carbon dioxide emissions, the U.S. government put restrictions on the Overseas Private Investment Corporation, a federal agency that is a principal tool for promoting investment in poor countries. A recent rule, added in response to a lawsuit brought by Friends of the Earth and Greenpeace, imposes blind caps on the total CO2 emissions in OPIC's portfolio, which ends up barring the agency from nearly all non-renewable electricity projects.

Even if global carbon emissions are worrisome, it seems misplaced to ask people in poor countries to bear the costs of a problem they didn't create. Ethiopians emit less than 1 percent of what Americans emit on a per capita basis, and Americans still get most of their electricity from non-renewable coal and natural gas.
The scale of energy poverty is such that sizable populations will still require old-school grid power.

OPIC's carbon cap is also largely pointless since it could have no conceivable impact on global emissions. While climate change is a very real concern, Africans are understandably more focused on the problem that seven in ten people living on the continent have no electricity at all. Because energy poverty is harmful to health, education, and prosperity, the United States should aim to increase access to electricity in Africa. To punish those we should be helping when we can't even implement a carbon cap at home makes the policy not only misguided, but also morally dubious.

What about renewable energy? It is true that OPIC has made impressive investments in solar, wind, and geothermal power. OPIC should continue to push the envelope for the benefit of Africans and all of us. But it is unrealistic to expect that nascent and expensive clean energy can meet all of Africa's demand. The scale of energy poverty is such that sizable populations will still require old-school grid power. Based on current economics, much of that power is going to come from fossil fuels, especially natural gas which is cheap and plentiful in Africa.

Yes, some areas will benefit from new off-grid renewable energy models. But dense underserved populations, such as the poor residents of Dakar and Nairobi, are going to be reached the old fashioned way: Burn gas in big power plants and hook up more homes to the grid.

The same goes for industry. Ghana's Valco aluminum smelter is running at 20 percent capacity due to a shortage of low-cost power. Getting Valco to capacity, with all the jobs and spinoff industries that accompany full production, requires new investments in large-scale power. Likewise for the 97 percent of large firms in Nigeria that rely on (costly, inefficient, and polluting) diesel generators to provide nearly two-thirds of their power.

So is there a compromise that would enable OPIC to help expand electricity access without undermining global climate goals? A simple exemption could do the trick. We don't need to cancel the emissions cap but rather give OPIC greater flexibility in countries where poverty is greatest and emissions are lowest. 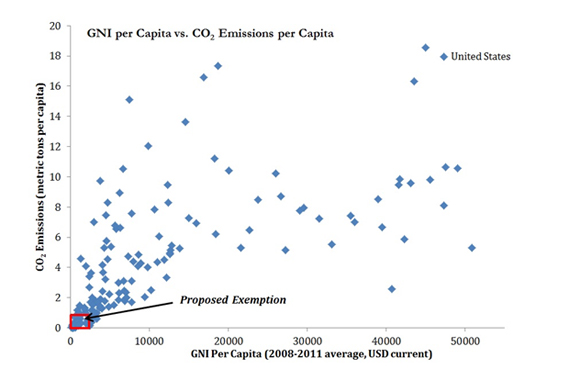 None of these 49 countries are major CO2 emitters and all have huge unmet energy needs. In fact, these countries alone have some 700 million people without access to electricity. Clear criteria make the rule transparent, and by using a percentage of the U.S. levels a country would naturally graduate if it suddenly became a major emitter or rich.

A Five Percent Exemption rule for OPIC would help to close the energy poverty gap while having a trivial effect on global emissions targets. And it would keep the United States from the hypocrisy of playing the fat man who gorges himself while forcing others to adopt a low-carb—or in this case low-carbon—diet.

Todd Moss is vice president for programs and senior fellow at the Center for Global Development. This piece was originally published under a Creative Commons license at Policy Innovations.