New Analysis of US Regional Power Generation Between 2007 and 2013

The analysis was conducted by examining generation data from eight different regions of the North American Electric Reliability Council (NERC — see map below) between 2007 and 2013. Because the mix of electricity generation sources varies widely across these regions, the impact that the changing share of one source of generation has on other sources is much easier to isolate. Disaggregated in this way, the drivers of shifting generation shares and falling emissions nationally become clearer than looking at the national aggregate.

Virtually all of the net growth in natural gas generation between 2007 and 2013 has displaced coal generation. As such, there is little evidence in the disaggregated data that net increases in gas generation at the regional level are associated with declining shares of nuclear or hydroelectric generation. This is because in regions where gas generation has grown, nuclear and hydro generation have either remained stable or risen.

Growth of non-hydro renewables, by contrast, account for little of the decline in coal generation. Most regions that saw strong growth in wind generation saw only very modest, if any, decline in coal generation. Because growth in wind was associated with significant declines in low-carbon as well as high-carbon electrical generation in many regions, wind’s overall per-unit carbon mitigation factor nationally has likely been similar to that of natural gas since 2007.

Disaggregating power sector generation data to the level at which regional grids operate and wherein different generation sources must be integrated clearly demonstrates that the growth of natural gas generation, along with reduced electricity demand, is responsible for the vast majority of reduced emissions in the US power sector since 2007. 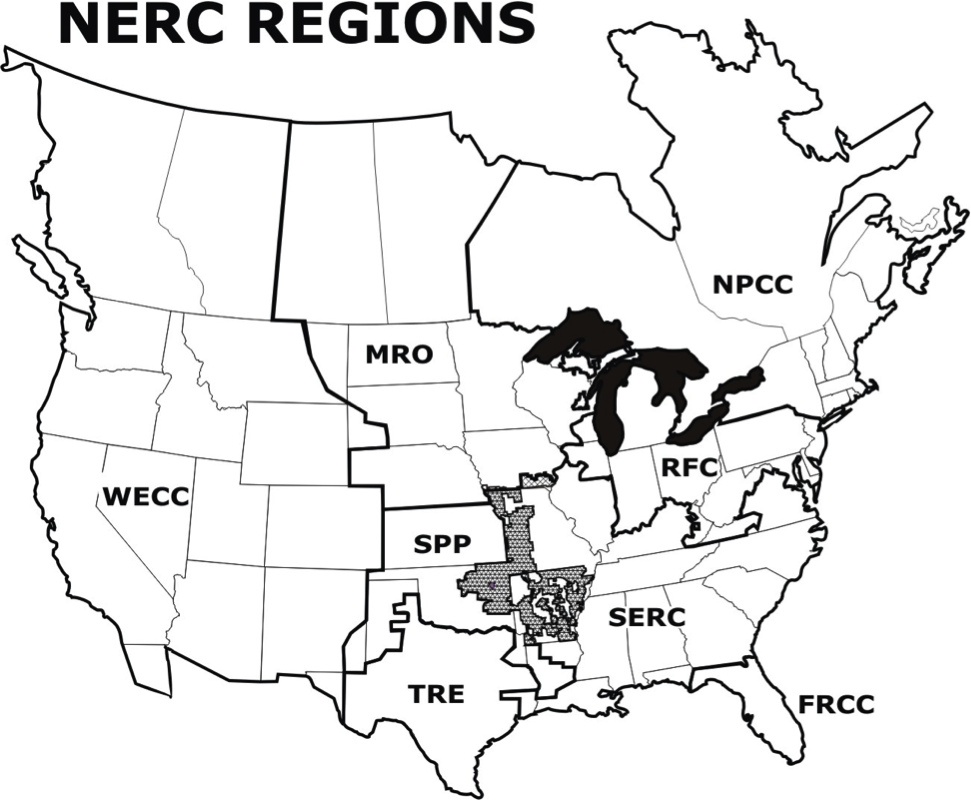 1. 80% of decline in coal generation nationally occurred in just two of the eight NERC regions.

The remaining 20% of the decline in coal generation nationally occurred across three other regions. In those regions, wind, gas, and falling demand accounted for the decline of coal in roughly equal measure.

2. The growth of gas generation nationally came almost entirely at the expense of coal generation.

The balance of the increase in gas generation occurred in the Florida Reliability Coordinating Council and displaced a mix of coal and petroleum generation. FRCC saw no significant declines in any other major generation source.

All told, about 91% of the absolute rise of gas generation is accounted for by declining coal in those three regions (RFC, SERC, and FRCC). Small amounts of petroleum, hydro, and nuclear appear to have been displaced by gas in those regions as well.

Nationally, the rise in natural gas accounts for about 45% of the decline in coal. The remainder was mostly accounted for by declining demand. 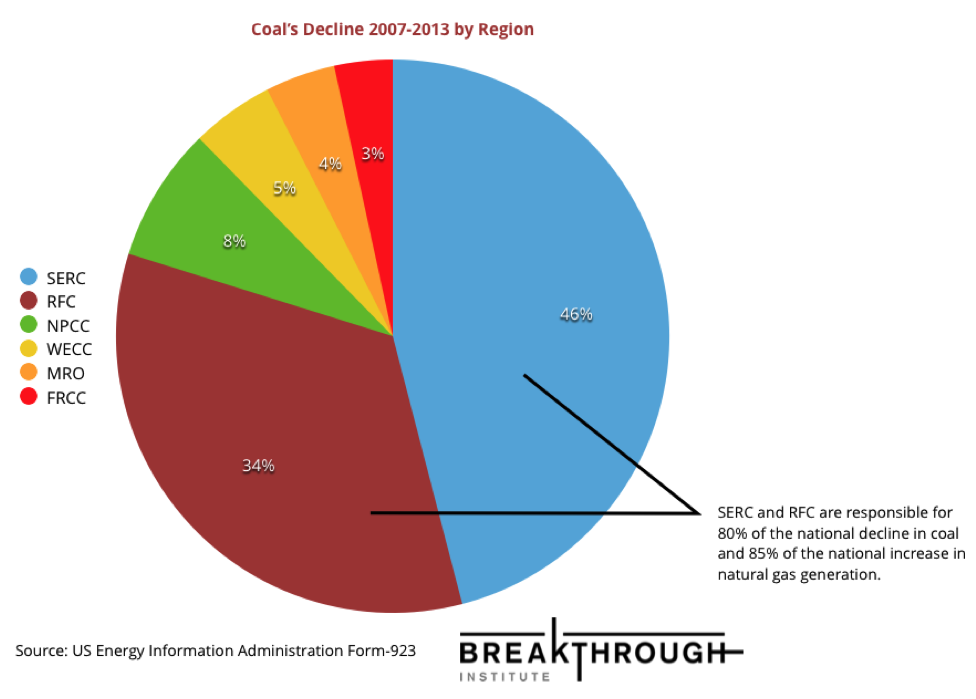 3. Growth of non-hydro renewables accounts for little of the decline in coal generation.

Overall, the emissions benefits of declining coal generation in regions in which wind grew strongly were eroded by declines in nuclear, hydro, and gas generation. MRO, SPP, TRE, and WECC, accounting for 81% of the increase in wind generation all saw consistent declines in all other major generation sources; coal, natural gas, hydro, and nuclear (although TRE saw a moderate increase in coal).

Under the highly unlikely and very best of circumstances, in which every kilowatt-hour increase of wind generation in a given regional grid is assumed to offset every kilowatt-hour of coal generation decline available in that grid, wind can at best account for 16.2% of the national coal decline, one-third what gas accounts for.

Assuming more realistically that wind replaced other generation in rough proportion to other fuels’ respective decline in the various regions, about 22% of the rise in wind generation is associated with a decline in coal, 31% natural gas, 24% hydro, 17% nuclear, 4% bioenergy, and 1% petroleum. Using these assumptions, the growth of wind since 2007 would only account for 1.2% of coal’s national decline. 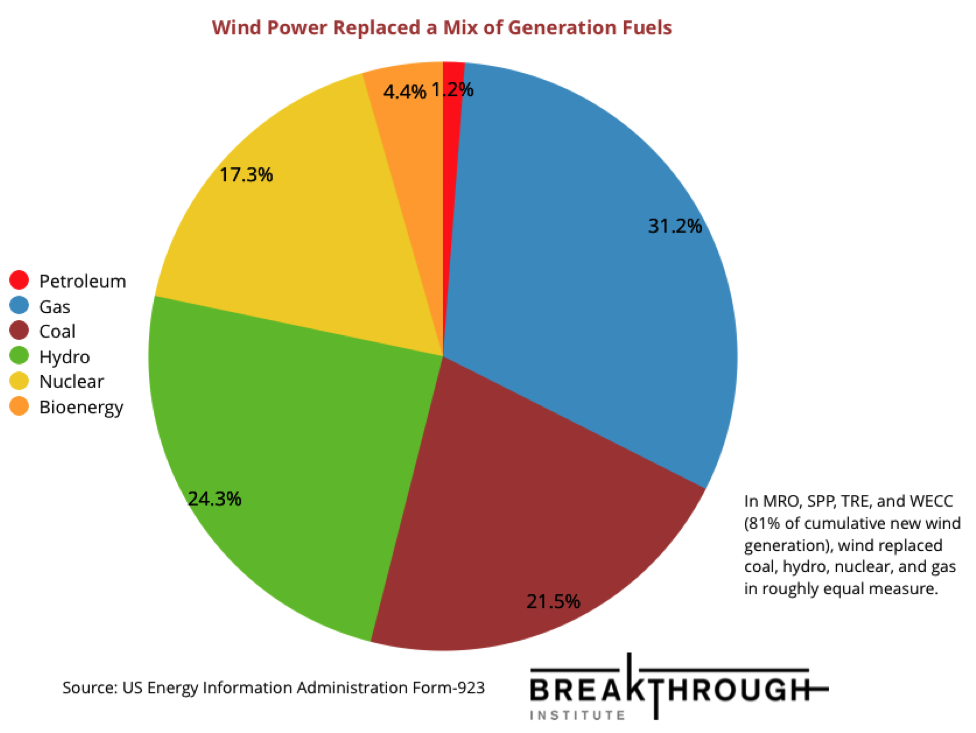 4. New wind generation and new gas generation nationally appear to have had similar impacts on emissions on a per-MWh basis.

Because gas has overwhelmingly displaced coal, while wind has grown in association with declining shares for a mix of low- and high-carbon generation sources, rising shares of gas and wind on regional grids have likely been associated, in the aggregate, with roughly equal changes in carbon intensity. We assume that coal produces about one ton of carbon dioxide per megawatt-hour of electricity (1 tCO2/MWh), petroleum producers 0.9 tCO2/MWh, gas produces 0.5 tCO2/MWh, and hydro, wind, nuclear, and bioenergy produce 0 tCO2/MWh. 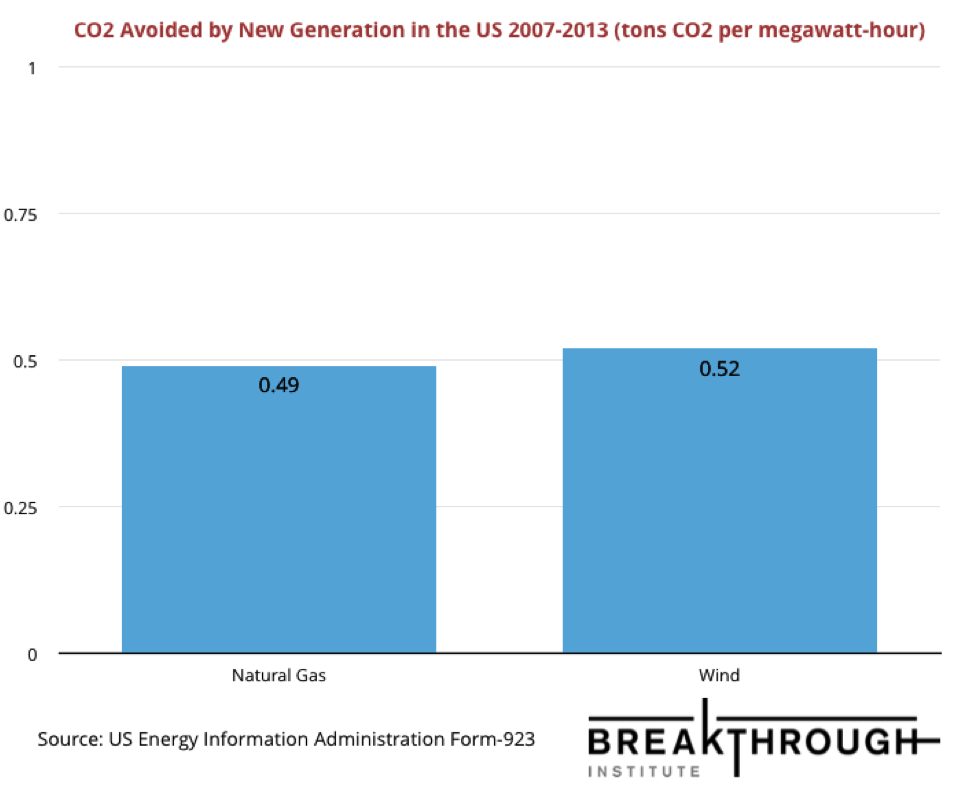 5. Net growth of gas generation in regional grids does not appear to be associated with declining net nuclear generation.

In two of the three regions in which gas generation increased, SERC and RFC, nuclear energy saw a modest increase in its generation share. In one region, FRCC it saw a small decline. By contrast, about 91% of the gross decline in nuclear generation nationally during this period occurred in regions in which wind saw strong growth.

6. Growth of gas generation is not associated with rising demand for electricity.

All three regions nationally that saw growth in gas generation saw falling electricity demand. By contrast, the two regions nationally that saw rising electricity demand, the Texas Regional Entity and the Southwest Power Pool, also saw strong growth in wind generation. In fact, in both regions, the growth in demand was almost entirely met by increased wind generation. Wind was the only generation source that grew in SPP. TRE also saw a very small increase in coal generation. However, the growth of wind in TRE was seven times larger than the increase in coal use.

Analysts have debated the cause of the decline in US power sector emissions since 2007. Analyses, for instance, from the US Department of Energy and Berkeley Earth have concluded that fuel-switching from coal-fired generation to gas-fired generation, thanks to cheap and abundant shale gas, is responsible for the lion’s share of decarbonization in the nation’s power sector. Analyses produced by Greenpeace, CO2 Scorecard, and the Rhodium Group using alternate methodologies and assumptions have concluded that renewables and efficiency deserve more credit for recent emissions reductions and that cheap gas is crowding out renewables and nuclear as well as coal, negating the benefits from the coal-to-gas shift.

The different conclusions associated with these studies are largely a function of different assumptions about what sources of generation the growth of renewables and gas, respectively, displace. If renewables exclusively displace coal, while gas displaces renewables and nuclear as well as coal, for instance, then the emissions benefits associated with the increase in gas generation will be much lower than if gas primarily displaces coal.

Changes in generation shares at the regional level, however, strongly support the conclusion that fuel-switching from coal to gas, along with falling electricity demand in the wake of the Great Recession, account for the vast majority of the decline in emissions. Moreover, the shift from coal to gas accounts for a significant majority of the decline in the carbon intensity of the US electrical grid since 2007.

The analysis above used data from the US Energy Information Administration’s Form-923, which tracks electricity generation at the plant level across all regions of the North American Electric Reliability Corporation (NERC). The following graphs and data tables show the change in generation across 2007 through 2013 for the eight NERC regions included in this analysis. 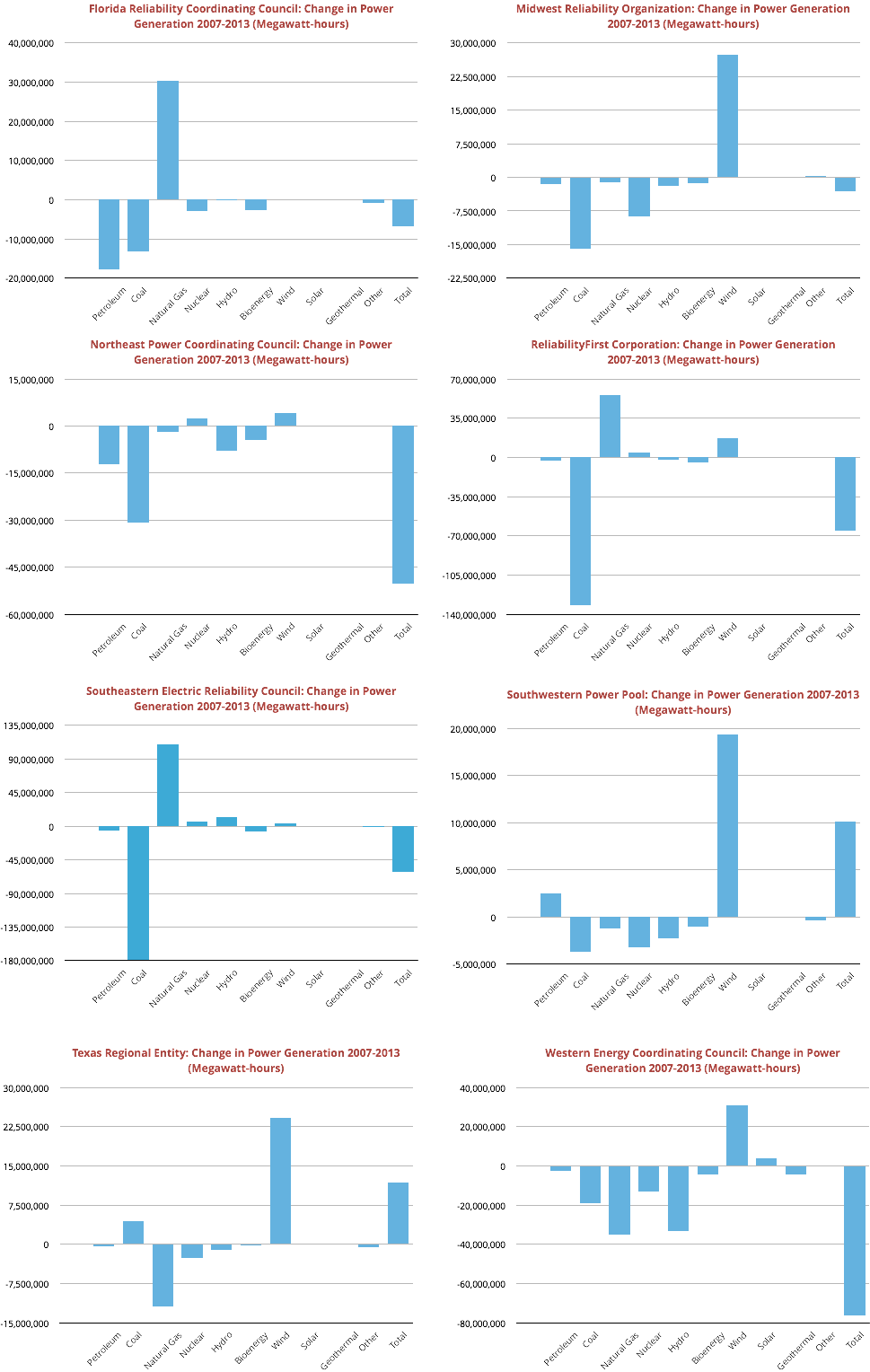