How the EIA and IEA underestimated industry’s growth, and why we must still be cautious

The rapid growth of solar power in the 2010s, both in the United States and worldwide, is one of the big success stories in recent energy history. However, as many analysts have pointed out, this success is one government agencies failed to foresee. Why have forecasts consistently underestimated the growth of solar and how can forecasts be improved in the future? This is an important question, since as we think about the options for decarbonizing the world’s energy system, we need to know what different technologies can do.

At the same time, in gazing fixedly at the gap between forecasts and the growth of solar, we risk losing the broader perspective. As I will argue, we must keep firmly in mind the reality that solar—despite its impressive growth—remains a small fraction of the world energy system. Recognizing this reality is essential if we are to address climate change.

To begin, let’s consider the data on the (in)accuracy of solar projections.

The International Energy Agency has routinely underestimated the growth of solar power in its annual World Energy Outlook. The energy analyst Auke Hoekstra has demonstrated the gap in forecasts going back to 2002. 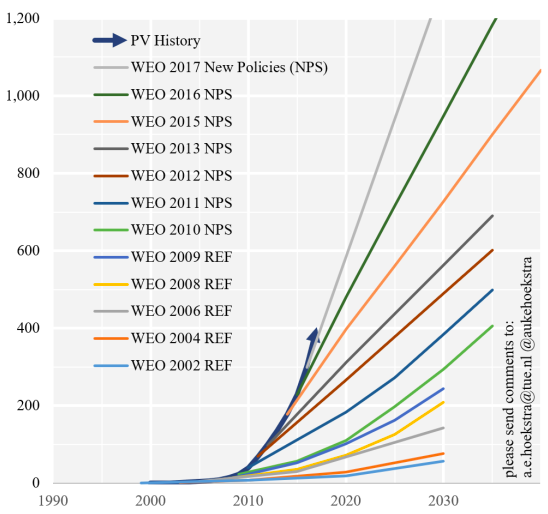 As a share of world electricity, solar grew considerably between 2010 and 2016—from just 0.15% of world electricity to 1.3%, a ninefold increase. Nevertheless, as Hoekstra demonstrates, each year the IEA continues to assume that the rate of new solar deployment will flatten out. For example, in 2010 the IEA predicted that there would be 294 gigawatts of installed solar capacity in 2030, but this level was already exceeded by 2016. One major reason for the error is that the IEA has historically failed to account for falling costs in making their projections.

Hoekstra is hardly the only analyst who has noted the IEA’s poor track record. Others—such as David Roberts and Zachary Shahan—have also illustrated the gap between prediction and reality.

The IEA is not the only major organization to get solar wrong. Michael Coren, Michael Grunwald, and Megan Geuss are among those who have noted how the Energy Information Administration (EIA), the statistical arm of the United States Department of Energy, has also underestimated the growth of solar in recent years. However, unlike the IEA, the EIA appears to have learned from past mistakes and are making efforts to adjust their methodology accordingly.

To better understand the EIA’s projection history, I looked through their flagship energy forecasting publication—the historical Annual Energy Outlook—going back to the first issue in 1979. My central finding is that the EIA’s forecasts have swung from optimism to strong pessimism, and most recently back to optimism, as the EIA has attempted to refine its projections.

Just as has happened worldwide, the solar share of electricity in the United States has grown dramatically: from just 0.07% of US electricity as recently as 2010 to 1.3% in 2016. 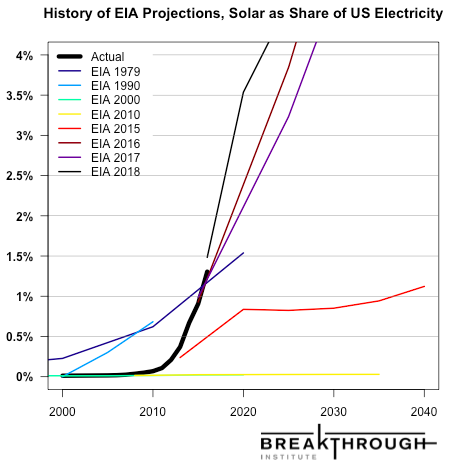 The EIA’s early forecasts turn out to be reasonably accurate, but too optimistic. The 1990 outlook foresaw nearly 0.7% of electricity from solar by 2010, a projection that was four years early. The EIA’s first outlook, published in 1979, was too optimistic in projecting how fast solar would become a mainstream power source, but was not far off in estimating that 1.5% of US electricity would come from solar in 2020. This value appears likely to be reached in 2017.

The EIA’s recent forecasts, beginning in 2000, have proven to be consistently pessimistic. In 2000, the EIA forecast that solar would barely reach 0.02% of US electricity by 2020, and as recently as 2010, the EIA thought that the US would reach only 0.03% of electricity from solar by 2035. We have already exceeded these values fifty times over. By 2015, the agency had revised their projections upward and was expecting 1.1% of US electricity to come from solar by 2040, a milestone that was already surpassed in 2016.

The EIA itself has given two main reasons for its recent underestimations of solar’s growth. First, the forecasts assume that present policy remains in place, which means that policies with sunsets that favor renewable energy deployment (such as tax credits) are not extended. State policies, such as renewable portfolio standards, net metering, and other utility regulations and incentives have also made major contributions to renewables growth. Both the wind industry and the solar industry acknowledge the importance of policy support in their own growth.

Second, the EIA also failed to foresee the rapid price drop of solar cells in the 2000s and 2010s. The price drop is driven in no small part by the Chinese solar industry, and the growth of this industry was itself enabled by policies supporting solar in Germany and elsewhere.

The EIA’s most recent outlook points to an attempt at significant course correction. It now projects that solar will rise to 519 TWh by 2040, a ninefold increase from the 2016 figure—a highly optimistic projection. Compared to earlier forecasts, the 2018 projection assumes lower solar cell costs and extended tax breaks.

Reality check: Solar still meets a small fraction of our energy needs, and this isn’t likely to change

Behind critiques of the IEA’s and EIA’s bearish solar projections is quite often the conviction that solar will continue to outperform expectations and perhaps power a large share of the world’s energy needs. Of course, critiques of solar projections are valid; without doubt, reliable forecasts and sound methodology are important so that investors and policymakers can make informed decisions. The EIA’s efforts to refine its projection methodology are commendable in this regard. However, there are three reasons why it is important to keep a tempered view of solar’s potential.

Second, there is good reason to doubt any projected exponential growth in solar. There are signs that solar eventually reaches limits in the most advanced markets. In Italy, Greece, Germany, and Spain, the high levels of solar penetration show signs of stalling, not unlimited rapid growth. California is one of the leading regions in the world for high levels of solar at 13% of total electricity, including distributed generation, but the Golden State will struggle to build the grid infrastructure needed to bring this figure much higher.

Finally, and maybe most importantly, solar remains a small portion of total US electricity, and a near miniscule percentage of the total energy system. Even the latest optimistic forecast of the EIA projects solar will reach only 8.2% of US electricity by 2040 and 1.8% of total energy usage. 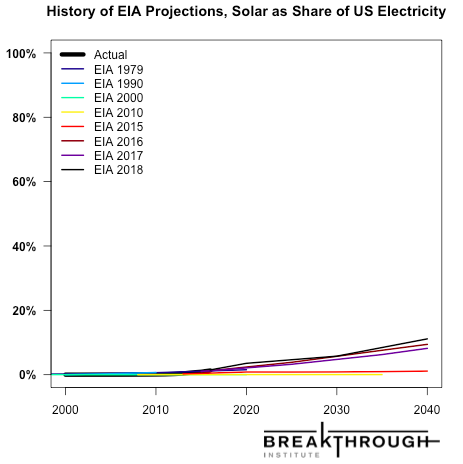 Rapid growth from a small base: Solar as share of electricity in the United States is projected to remain small. Sources: BP and EIA Annual Energy Outlook. 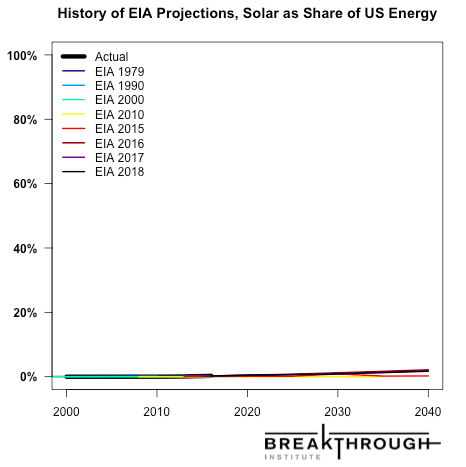 As a share of the total US energy system, neither today’s solar nor recent projections make much of a dent. Sources: BP and EIA Annual Energy Outlook.

Why all decarbonization options should be on the table

Yes, it is possible that that the solar share will continue to grow exponentially and provide a majority of American electricity by 2040, as some forecasts suggest. With next generation cells, cheap storage, and long-distance power transmission, solar may continue to grow. And we should do everything possible to continue the research, development, demonstration, and deployment required to further support its growth.

The reality, however, is that solar has not demonstrated that it can carry the lion’s share of decarbonization, and confidently extrapolating exponential growth from a small base decades into the future is unwise given the inherent unreliability of energy forecasts.

Solar triumphalism carries the risk of convincing policymakers that other clean energy or emissions reductions technologies—such as advanced nuclear, CO2 capture and sequestration, or geoengineering—can be safely taken off the table. To do so would be profoundly unwise, binding our hands in addressing the global challenge of climate change.