Cheap natural gas has reduced carbon emissions on the US electricity grid more than anything else over the past decade.

That’s the core conclusion of our new analysis. But while the coal-to-gas shift continues to lead power sector decarbonization, wind is playing a bigger and bigger role.

Over 2007–2015, the period we studied for this analysis, the replacement of coal with cheaper natural gas was responsible for a cumulative 443 million tons of carbon emissions reductions. That compares to 316 million tons of reduced emissions due to lower demand, and 294 million tons due to increased wind generation. See Figures 1 and 2 for details.

Figure 1: Decarbonization benefit of new generation and demand reduction in 2015, compared to 2007 emissions 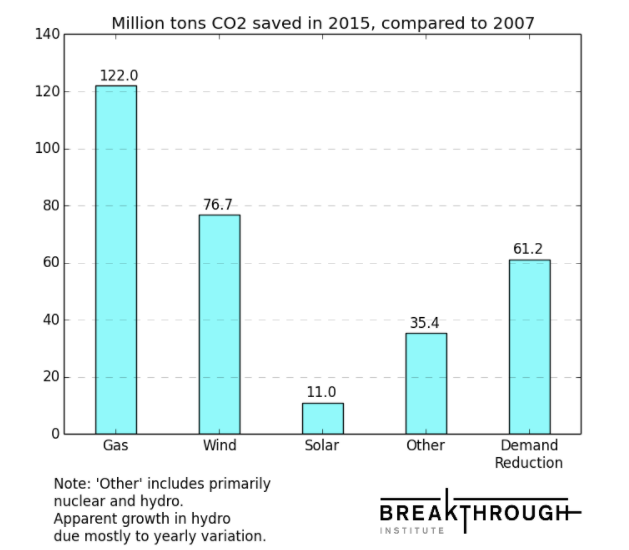 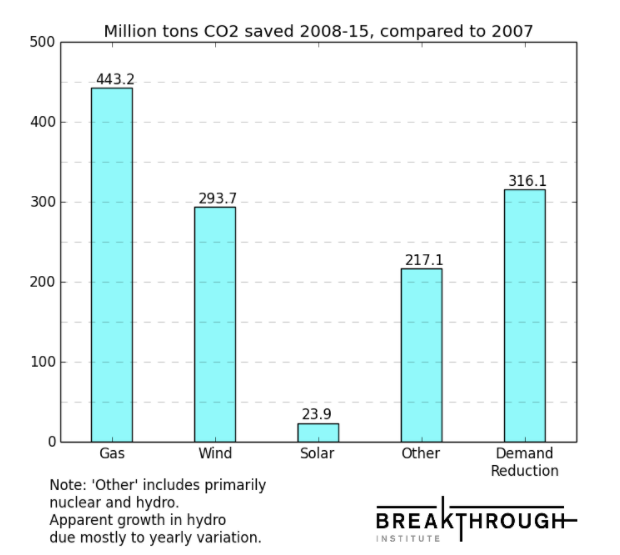 These conclusions build on a 2014 Breakthrough analysis in which we found that the decline in coal was overwhelmingly due to natural gas, while wind replaced a much more diverse base of resources over the 2007–2013 period.

How can natural gas, a fossil fuel with significantly greater emissions than renewable sources, decarbonize the power sector more than wind?

If natural gas generation replaces coal generation while wind replaces hydroelectric, then gas has a greater decarbonizing benefit. And that does happen, for instance, in the American Midwest, where gas has displaced a lot of coal, while wind has displaced some hydro in the West. But on average, a megawatt-hour generated by wind reduced more carbon than one generated by gas. The biggest reason that gas has reduced carbon emissions more than wind is simply that there’s a lot more new gas generation than wind.

It’s a complicated question, and we need more than national data to answer it. So, as in our 2014 analysis, we broke down annual generation into the 10 North American Electric Reliability Corporation (NERC) regions. Although the NERC regions do not perfectly represent autonomous electricity markets, they allow for more precise analysis of the evolution of the grid than would be possible from looking at US electricity as a whole.

Similar to the 2007 to 2013 change, in 2014 and 2015 we continue to observe major declines in coal production and increases in natural gas. Wind was the second largest source of growth in generation. Solar saw big growth in 2014 and 2015, mostly in the WECC (Western Electricity Coordinating Council) region, but remains under 1% of total electricity nationally (our figures, taken from the EIA Form 923, count only utility-scale solar and not distributed solar).

In each of the mainland NERC regions, coal production fell, while gas production increased in all regions except WECC (gas and solar also fell in ASCC, the Alaska Systems Coordinating Council). Gas was the largest source of new generation, while wind was the second largest. Changes in each major source are illustrated in Figure 3. 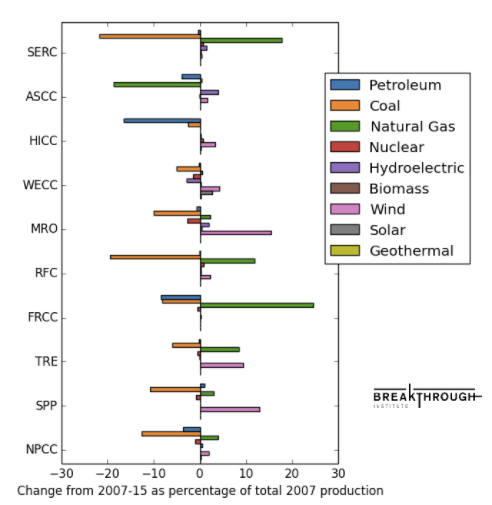 To estimate the greenhouse gas benefit (or detriment) of new power sources, we first estimate the intensity of displaced sources by taking the average of the carbon intensities of all sources that decreased, weighted by the amount of decrease. The greenhouse gas intensity benefit or cost of a fuel that grew on the grid is the difference between the displaced intensity and the intensity of that fuel. If a power source that grew has a greater carbon intensity than the sources it displaced, then the greenhouse gas benefit is negative, or, in other words, deployment of the source led to re-carbonization instead of decarbonization.

This calculation is based on the assumption that a power source that grows displaces sources that decreased in the proportions by which they decreased. However, if a grid grows in size overall, then only a portion of the increase in a power source displaces other sources, and the remainder satisfies new demand. The benefits or costs of adding new sources are reduced accordingly.

From 2007 to 2015, overall generation fell in all grids except FRCC (Florida Reliability Coordinating Council), TRE (Texas Reliability Entity), and SPP (Southwest Power Pool). As seen in Table 1, that demand reduction is responsible for a significant portion of reduced emissions. But obviously, demand reduction reduces emissions more on grids with higher carbon baselines, and as the country has emerged from the Great Recession, demand reduction has slowed.

Meanwhile, wind energy is doing a lot more decarbonization work than it has in previous years.

All of this is good news. Carbon emissions are 14% lower now than they were a decade ago in the power sector, mostly as a result of the shale gas revolution, the build-out of wind energy, and demand reduction. As we look toward deeper decarbonization, there are some important implications.

For one, there’s only so far that demand reduction can take us. Much of the “decarbonization” of the last decade was actually just slower economic growth following the Great Recession—that’s something we cannot (and, we think, should not) hope for in the future. Further, as other sectors of the economy—including transportation and industrial sources—electrify, total electricity demand is almost certain to go way up this century. With that in mind, we need to double down on low- and zero-carbon power generation to reach deep decarbonization.

Two, the coal-to-gas transition will run out of runway eventually. If we want to reach the 30% reductions by 2030 envisioned by the Clean Power Plan, then coal-to-gas is a good way to get there. If we want to reach 80% or higher reductions by 2050, we’ll need to replace that natural gas with renewables, nuclear, and/or carbon capture in the long term.

Three, renewables—especially wind but also solar—are a growing force for decarbonization. That will continue as wind and solar get steadily cheaper with further deployment. But even as wind turbines and solar panels get cheaper, greater penetration on electric grids leads to value deflation. That’s because greater penetrations of intermittent renewables fluctuate between zero generation and overgeneration on a grid, which leads to increased costs. You can read more about this challenge here.

If we put all that together, we arrive at our ultimate conclusion: we need better tools, technologies, and policies to meet our ambitious climate goals. Follow our work in the future for more on deep decarbonization.

The author would like to thank Eric Gimon for a fruitful discussion and helpful suggestions on this project.

The Role of Baseload Low-Carbon Electricity in Decarbonization