The Role of Baseload Low-Carbon Electricity in Decarbonization

The last decade has seen tremendous progress in renewable energy. The cost of manufacturing solar panels and wind turbines has fallen precipitously. Thanks to ongoing policy support in the form of mandates and subsidies, world solar photovoltaic capacity reached 227 GW in 2015, up from just 40 GW in 2010. World wind capacity, meanwhile, has more than doubled since 2010, hitting 433 GW in 2015.

The full cost of deploying solar and wind generation capacity, however, is not fully captured by the cost of solar panels and turbines. Wind and solar are intermittent sources of power and bring significant further costs associated with their integration into electrical grids that must produce power on demand, 24 hours a day, 365 days a year. There is substantial debate as to how significant those costs are. Modeled estimates of the system costs of variable renewables are highly dependent upon a range of assumptions about the cost and availability of storage, the ability to manage electricity demand, the geographic scale of electrical grids, and the cost and availability of long-distance electrical transmission. Depending upon these assumptions, the cost of decarbonizing the power sector predominantly through variable sources of renewable energy can vary from relatively modest to prohibitive.

In this analysis, we take a simpler and more straightforward approach to this question, evaluating both the cost and carbon intensity of electrical grids in 18 of the world’s leading economies: Italy, Germany, the United Kingdom, Belgium, Portugal, Spain, Slovakia, the United States, France, South Africa, Austria, Poland, the Netherlands, Australia, the Czech Republic, Canada, Finland, and Sweden. Of these, five countries, namely Canada, Sweden, France, Austria, and Slovakia, source more than 60% of their electricity from nuclear and hydro—both low-carbon baseload sources of power. Another four, namely Italy, Portugal, Germany, and Spain, get more than 20% from other renewable sources, including wind, solar, and biomass. 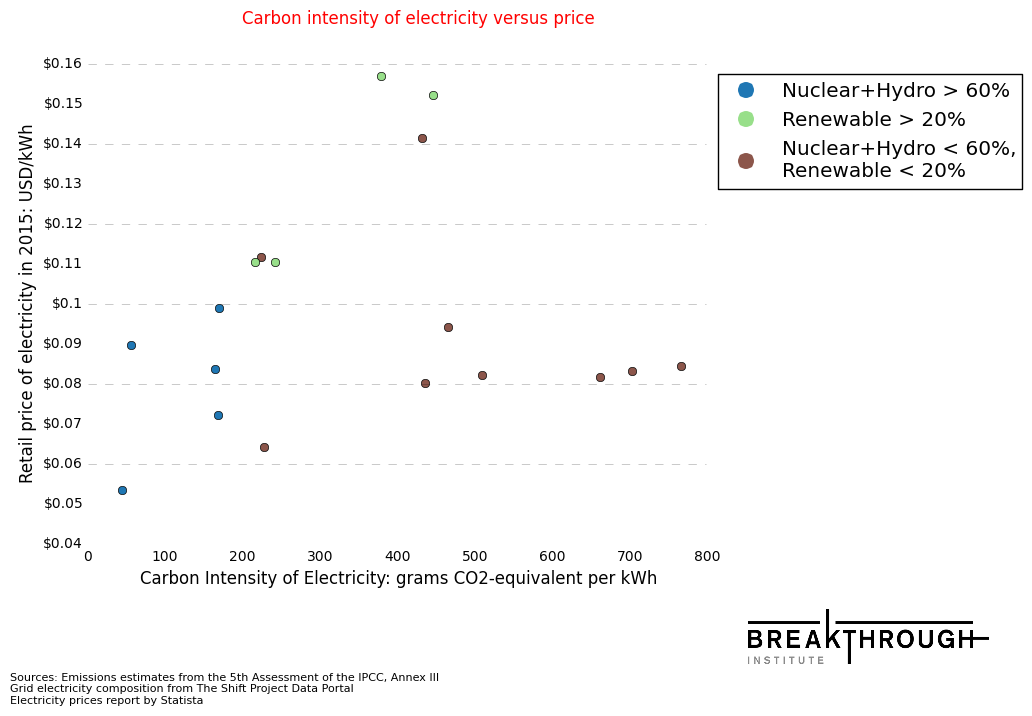 Analysis: Countries with more hydro and nuclear have cheaper electricity and lower carbon intensity than countries with heavy penetrations of intermittent renewables.

We find that the grids based on nuclear and hydro have both lower carbon intensity and cheaper electricity than the grids with high shares of non-hydro renewables. While high non-hydro renewable grids can have lower emissions than grids that rely heavily on fossil fuels, they tend to do so at significantly higher cost. By contrast, grids with very high penetrations of nuclear and hydro produce electricity at costs that are comparable with or lower than the cost of electricity from electrical grids that are still heavily dependent upon fossil energy.

This analysis requires several caveats. First, installed nuclear and hydro capacity tends to be of older vintage than installed wind and solar capacity. Capital costs associated with building nuclear and hydro capacity have been amortized through the finance of hard infrastructure with operational lifetimes of 60 to 80 years at a minimum. This is, however, a feature not a bug. Investments in these technologies assure many decades of low-carbon electricity at costs that, over the long term, have proven extremely competitive with fossil energy infrastructure.

Secondly, electrical grids with relatively high shares of wind and solar generation are still largely fossil-powered grids. Nations that source 20 to 30% of their electricity from wind, solar, and biomass get up to 60% of their electricity from fossil generation, as is the case in Germany. Higher renewable energy shares in these contexts would bring lower carbon intensity. But most analysis suggests that higher penetrations of variable renewable sources bring higher integration costs. Analyses differ as to how significant these costs will be, but virtually all agree that higher integration costs will accompany greater VRE penetration.

Third, not all costs associated with the deployment and operation of low-carbon generation technologies are reflected in electricity prices. Nuclear fleets in much of the world have been built and operated by state-owned or subsidized enterprises. Depending on the nation in question, there is some question as to whether the full costs of these fleets have been entirely passed on to end users. Similarly, virtually all wind and solar deployment globally has depended upon substantial and direct state subsidies of one sort or another. In many cases, these costs are not reflected at all in prices paid by end users.

Finally, current electricity costs do not reflect the future costs associated with electrical generation or the various ancillary technologies (e.g., storage and transmission) necessary to support the integration of VRE into modern electrical grids. Breakthroughs in the cost of wind and solar energy, energy storage, and transmission could significantly reduce the full system cost of electrical grids with high VRE shares. Similarly, new advanced nuclear technologies could significantly bring down the up-front costs associated with deployment of new nuclear energy capacity.

What this analysis does suggest is that given current technology and experience, nuclear and hydroelectric power remain the cheapest way to deeply decarbonize modern electrical grids. High up-front capital costs associated with those technologies, changing electricity markets, and negative public opinion, however, remain obstacles to their widespread deployment. Continuing innovation in both nuclear and variable renewable energy technologies remain critical in order to decarbonize electrical grids at rates consistent with achieving meaningful climate mitigation at costs that publics around the world are likely to tolerate.