Some have described the growth of solar electricity as “exponential,” and many expect solar power to provide the bulk of zero-carbon energy in the future. There’s reason for optimism. Solar panel costs have plummeted and solar deployment has skyrocketed. But as we at Breakthrough have warned for some time, cheaper panels do not guarantee sustained boom times for solar. We’re already seeing signs of the economic and technical roadblocks that solar enthusiasts shrug off at their peril.

Here’s what solar generation looks like in six leading solar markets around the world: 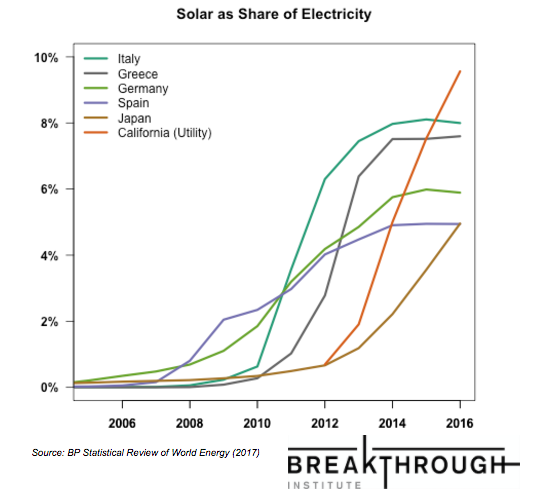 The top five countries in solar penetration have each achieved 4.5% or more of their total electricity production from solar. Of these, Italy, Greece, Germany, and Spain have shown stagnation in their solar shares since 2014. California, a state with nearly four times the population of Greece, has beaten every county in the BP data set with solar penetration close to 10%, and 13% if distributed solar is also counted.

In Germany, what looked like exponential growth in, say, 2011 looks a lot more like logistic growth today (in other words, an S-curve rather than a steepening slope). Time will tell if California and Japan follow the trend on display in Germany, Spain, Greece, and Italy, but there are reasons to expect this saturation to plague solar around the world.

Fundamentally, the problem comes down to the economics of the power grid. The more solar there is on the grid, the more power is produced when the sun is out, which depresses wholesale prices midday and potentially requires that the solar or some other power source be curtailed. This loss cuts into solar’s economics. As a result, Jesse Jenkins and Alex Trembath observed that solar would be limited at or near penetration equal to its nominal capacity factor on any grid. In other words, if the capacity factor of solar in California is about 27%, then California will have a hard time reaching more than 27% solar on its grid.

Now, 27% would be a lot! We should be so lucky: Greece, Spain, Germany, and Italy have all seen solar deployment saturate well below their own “capacity factor threshold,” at least for the time being.

Of course, the picture for renewables looks better if we bring wind into the equation. But for similar reasons—they’re both intermittent generation technologies—wind shows a similar, if less pronounced, saturation: 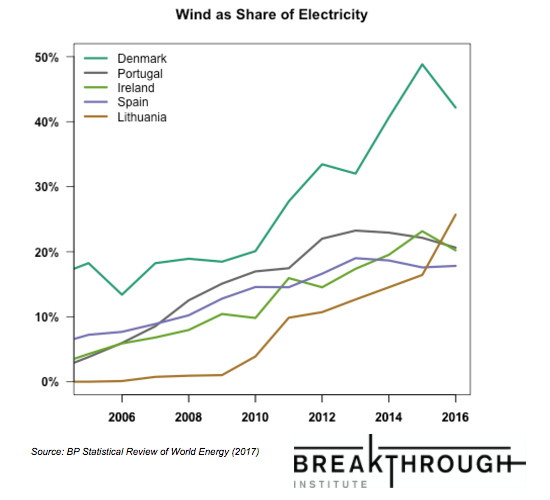 Each of the top five wind-producing countries has achieved 15% electricity or greater from wind over the year. Of these, Denmark, Portugal, Ireland, and Spain have shown stagnation, while Lithuania is continuing to grow without yet showing a clear peak. Lithuania imports about two-thirds of the electricity it uses, has good grid interconnections, and cost-competitive wind resources, creating the market conditions for high wind production.

Additional growth in variable renewable energy in the world’s leading countries could be difficult. One option to smooth out the variability of renewable sources is the connection of grids with high-voltage direct current cables. So far grid-level batteries have not been an economical way to store large amounts of energy. Cheaper lithium-ion batteries could change this, although recent grid-level trials have shown the economic challenges that remain.

While the progress in wind and solar power has been a valuable achievement, excessive hype about renewable energy technologies creates false optimism and leads policymakers to foreclose other important solutions, such as advanced nuclear power and carbon capture and storage. It is therefore necessary to keep a pragmatic view of the limitations of renewable energy and the technological innovation and infrastructure that will be required to overcome those limitations.

Progress (Or Not) in Global Emissions