A new report provides further evidence that cattle grazing, even when purportedly low-impact practices are used, might not be carbon-neutral or reduce net greenhouse gas emissions. This isn’t exactly groundbreaking: experts have long known that cattle have disproportionately large environmental impacts, especially when they spend their entire lives on pasture. This report adds to our understanding by calculating that at a global scale, grazing systems cannot sequester more carbon than is produced over the life of the cattle. What it doesn’t do, however, is consider how the environmental impacts of different production systems square up.

The new research, published by the Food Climate Research Network, finds that under the right conditions, best-practice cattle grazing can sequester more carbon in the soil than is emitted over the life cycle of the production system. But these cases are rare and cannot be scaled up across much of the world’s grazing land. This comes in stark contrast to the views of advocates like Allan Savory, who has claimed that so-called “carbon grazing” could sequester not only all the carbon emitted by livestock, but all the carbon emitted across all sectors of the economy.

The authors of this work, and many of the journalists covering it, have used its findings to echo a long-heralded environmental imperative: we should all eat less beef.

Abstaining from beef or eating lower on the food chain has obvious environmental upsides. But few in this debate have been willing to seriously consider another uncomfortable conclusion: that beef from feedlot cattle might have a lower carbon footprint than beef from cattle that have spent their entire lives on pasture. 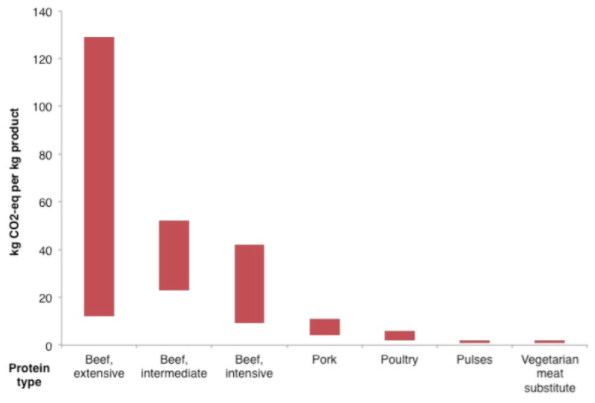 Figure originally published in Science of The Total Environment

The new report doesn’t compare these systems directly, but highlights the need to more carefully assess the environmental impacts of pasture and feedlots.

Some argue that although raising cattle entirely on pasture may emit more methane and other greenhouse gases than feedlot cattle, the additional carbon sequestration makes the former more climate-friendly. But we have to remember that even cattle finished in feedlots spend most of their lives on pasture, so any benefits of soil carbon sequestration accrue to both systems. The only source of environmental impacts not accounted for in our recent paper is the additional pasture land needed for grass-finished cattle. For this to offset the lower impacts of finishing cattle in feedlots, the additional pasture would need to have substantially higher rates of carbon sequestration than the land use it replaces.

While the new report does not settle the question, its findings imply that this is unlikely to be true in many situations. Instead, the authors warn that “significant expansion [of grazing] would cause catastrophic land use change and other environmental damage.”

Given wide differences in feedlots and grazing across countries, it’s almost inevitable that feedlots will be the climate-smart choice in some circumstances just as pasture will be in others. At Breakthrough, we’re currently looking into the best empirical research on lifecycle greenhouse impacts from beef production, including under what circumstances finishing cattle in feedlots versus pasture has the lowest impacts. It’s mighty complex, and worth a healthy dose of care and nuance.

But ultimately, an evidence-based look of this terrain demands that we reconsider what we have cast as the traditional environmental villains. While we’re giving people the uncomfortable advice to eat less beef, we should be honest about the uncomfortable evidence in favor of feedlots.