People like straightforward stories and guidance. It’s therefore not surprising that the message “organic equals good; synthetic equals bad” has proven so popular.

In their essay, "The Hidden Footprint of Making All Farms Organic," Dan Blaustein-Rejto and Linus Blomqvist discuss why such oversimplifications are not only false, but also potentially damaging. I have spent a lot of time attempting to visualise and communicate the impact of long-term yields, land use, and agricultural inputs on land sparing, and so share their sentiments. I also previously covered the environmental comparison between organic and conventional agriculture across a range of metrics (land use, greenhouse gas emissions, energy, and water pollution), and the data allowed me to reach similar conclusions. It was one of my most popular articles; partly because it debunked some people’s prior misconceptions, supported those of others, and ultimately tried to answer the seemingly simple question: is organic or conventional better?

Nonetheless, there are a number of reasons why this is the wrong question to ask. We should (myself included) be careful in attempting to simplify such debates to a binary either-or contest. Such discussions tend to address organic and conventional farming as single opposing categories when in fact they are spectrums: “conventional agriculture” comprises a range of approaches, varying significantly in terms of fertilizer and pesticide intensity, cropping, and harvesting methods. Some will be lower-impact and more sustainable than others.

A more useful question asks where the sweet-spot lies on this spectrum: what combination of input intensity and farming methods achieve the most optimal (if there is such a parameter) balance across a number of conflicting environmental, economic, and social considerations? This will not be the same across all food products and geographical contexts. The simple question “organic or not?” misses these nuances completely.

When we distil metrics into simple binary options, we also neglect the fact that food systems are, well, systems. Our diets are not solely determined by whether the food we eat is organic or not. They depend on the complex interplay of food type, agricultural methods, climatic and geographical context, livestock feed types, among others. As a conclusion to my original article on organic-vs-conventional agriculture, I pointed out that the differences in environmental footprint (regardless of whether measured in terms of land, greenhouse gas emissions, or water) between different food groups are several multiples — in many cases an order of magnitude — greater than the relative comparison between organic and non-organic. We see this comparison in the chart below, which shows the land footprint of producing 100 kilocalories of food across a range of organic and non-organic food types (the unit protein version of this graph is available here, but tells a similar story). 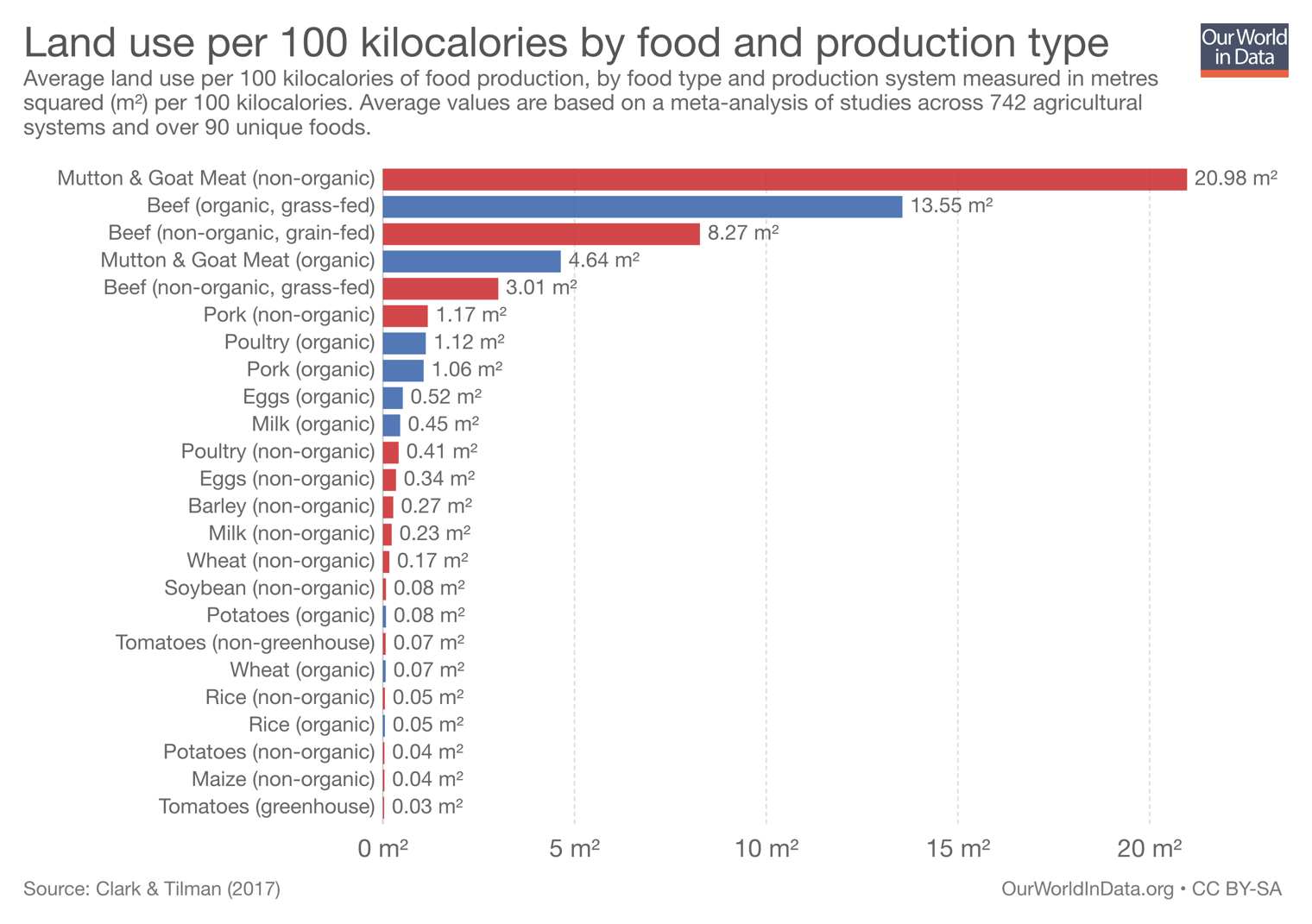 The land footprint of our diet is first and foremost determined by the amount of meat and dairy we eat. This is the first and primary determinant, regardless of whether it’s organic, non-organic, grass-fed, or grain-fed. Does this mean we should focus only on what we eat and forget how it’s made? Of course not. But when we focus on binary debates of organic-vs-conventional (or grain-vs-grass fed, or local-vs-global) we risk communicating to others that organic-vs-conventional is the only aspect that matters. A lot of people buy into this narrative. I have met too many individuals (on both sides of the organic debate) — even those working in the sustainability field — who make this the holy grail of their food choices.

Note that this does not mean we should instead substitute the organic debate for another dual option: meat or non-meat. My point is that any question which poses food discussions as single polarising or binary choices is not the right question to ask. Binary options and solutions simply don’t exist in a complex food system which must balance food output, environmental sustainability, economic sustainability, nutrition, and social wellbeing. Sometimes it’s okay to admit that it’s a little more complicated than that.

We must therefore capture and communicate the various levels of choice factors in a simple way. That’s not an easy task. I suggest a hierarchy: the first layer is your choice of food product (which in most cases is the largest determinant of footprint); this is then followed by a series of simple decisions on inputs and how it’s made. The type of agricultural system (whether organic or not) is certainly an important rung on the ladder. But it’s not the only one. When discussed in isolation, people are often misled into thinking it is. We often known this as researchers, but must do better in making this clear in our outreach.

Hannah Ritchie is a researcher working at the online publication OurWorldinData.org, where she focuses on the intersection between sustainability and global development.

To Cut Nitrogen Pollution, Move Past the Synthetic-Organic Debate