New Data and Perspectives in the Organic vs. Conventional Debate

Last week, the open-access journal PLoS ONE published a paper by Andrew Kniss, Steven Savage, and Randa Jabbour measuring the difference in crop yields between organic and conventional farms in the US. But, in line with the author’s express hopes, this paper is “not just another organic yield vs conventional comparison for partisans to throw at each other in debates.”

The appeal of the paper was best summarized in a tweet by Tamar Haspel: 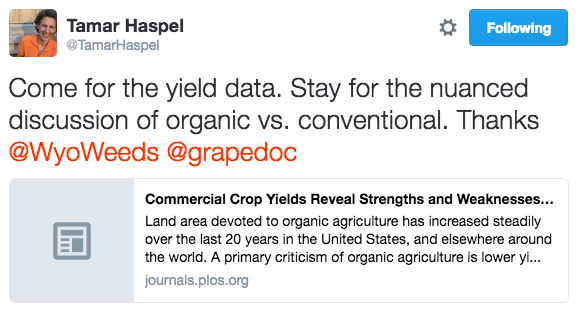 Similar to other studies, Kniss and his colleagues find that organic yields are on average about 20% lower than conventional yields in the United States. But the authors also strongly argue that the sustainability of agriculture shouldn’t be judged on yields alone.

As they write, raising yields might not actually reduce the total area of cropland, and thus not spare forests and other natural habitats from being converted to farmland. What’s more, they argue, lower yields might be a price worth paying for the other environmental benefits that organic farming bring.

I’ll address each of these in turn.

According to Kniss and others,

“...yield gains have not been clearly linked with increased land set aside for conservation at the global or regional scale, thus the yield/conservation tradeoff is likely a false dichotomy not representative of the socioecological complexity of agricultural systems, with management decisions tied to markets and policy.”

At the regional and national scale, the evidence that higher yields equal less farmland – often referred to as “land sparing” – is indeed a mixed bag. In some countries, yields have increased over time while per-capita cropland has gone down; in other countries, it has gone up. This finding led Robert Ewers and others to conclude that “land-sparing is a weak process that occurs under a limited set of circumstances.”

This should be interpreted with some caution, since the study in question didn’t compare the outcomes of with a counterfactual–in other words, they didn’t ask what would have happened in the absence of yield improvements. Perhaps other factors stimulating cropland expansion outweighed the effect of the higher yields.

Still, the results are not surprising. When farmers in a region become more efficient and their yields go up, they can often sell their goods at a lower price. This increases demand for their crops, giving the farmers an opportunity to increase their incomes by taking new land into production. In the end, a country might see farmland grow rather than decline as average yields go up. The only way to counteract this effect would be to halt farmland expansion by other means, such as protected areas.

On a global level, however, the dynamics are different. While global food demand increases when yields go up and prices down–as was the case for most of the second half of the 20th century–the rise in demand is often not large enough to offset the higher yields. For instance, if yields go up by 10%, food demand might only increase by 5%. As a result, cropland area will be lower than it would have been without the yield improvement.

In this case, any rise in global average yields is very likely to be land sparing, even if we account for economic rebound effects. And indeed, Derek Byerlee and his colleagues observed as much in their 2014 paper: “At a global level, technology-driven intensification is strongly land saving although deforestation in specific regions is likely to continue to occur.” Another paper by Thomas Hertel and others concluded that the Green Revolution reduced cropland expansion by half compared to a counterfactual scenario, sparing an area larger than Western Europe.

So it appears that, at least the the global level, the yield/conservation trade-off is not a false dichtomy. How then might we answer the question posed by Kniss and his colleagues: How much yield is enough? Might the lower yields in organic farming still be acceptably high in order to feed the world and spare some land for nature?

One way to look at it is to ask what it would take to keep food prices and cropland area from rising. Roughly speaking, to do so, yields would have to rise in tandem with food demand. This presents a massive challenge over the next few decades. Crop demand is forecast to grow by somewhere between 40% and 70% to 2050. Only if yields keep up–something that requires yields to grow at least as fast in the next several decades as they did during the Green Revolution–do we have a chance at avoiding further net deforestation from cropland expansion. In this regard, a yield loss of 20% or more in organic systems, if widely implemented, is the last thing we need. It would come at a high cost, from the perspective of conservation as well as food security.

Even so, as Kniss and colleagues argue, yields are not the only factor to consider. To complete the picture, we need to also look at pollution from nutrients and pesticides, water consumption, and other environmental and socioeconomic impacts. If organic farming is better on all these other accounts, perhaps it’s worth the sacrifice in terms of yields.

To assess these trade-offs, we need to study the environmental impacts per unit of output, such as per ton of crops. This is the fairest way to assess farming practices, since it tells us what the costs and benefits are at any given level of food demand. On these terms, studies have found that nitrogen pollution is the same, if not higher, in organic systems compared to conventional. Pest control in organic farming is low-impact when it is preventative–such as through crop rotations–but often worse than conventional once a pest outbreak actually takes place, since organic farmers are highly restricted in their choice of pesticides. Any reduction in greenhouse gas emissions from organic farming operations might be counteracted by the carbon losses from expanding farmland into natural habitats.

But ultimately, neither system is a clear winner because each combines a set of good and less good practices. Organic farming is made less sustainable by its insistence on not using from synthetic fertilizers and certain low-impact synthetic pesticides. Conventional farming could lower its impacts by, among other things, adopting more proactive pest control measures like crop rotations. In other words, the trade-offs between yields and other environmental impacts are not a given. We can get the benefit of crop rotations without abstaining from yield-enhancing synthetic fertilizers and pesticides.

In the end, as Kniss and others conclude, the most environmentally and socially beneficial farming of the future–in terms of yields, pollution, and many other factors–will mix practices from both. And that's where we find my biggest reservation against organic farming: its current restrictions–as defined by USDA certification–forecloses some of the ways by which farming could evolve to not only raise yields but also achieve other environmental and social goals.

Food Production and Wildlife on Farmland