Saving Lives Does Not Lead to Overpopulation

The Age of Peak Child

Going back at least to Thomas Malthus, who published his An Essay on the Principle of Population in 1798, people have worried about doomsday scenarios in which food supply can’t keep up with population growth. As recently as the Cold War, American foreign policy experts theorized that famine would make poor countries susceptible to Communism. Controlling the population of the poor countries labeled the Third World became an official policy in the so-called First World. In the worst cases, this meant trying to force women not to get pregnant. Gradually, the global family planning community moved away from this single-minded focus on limiting reproduction and started thinking about how to help women seize control of their own lives. This was a welcome change. We make the future sustainable when we invest in the poor, not when we insist on their suffering.

The fact is that a laissez faire approach to development—letting children die now so they don’t starve later—doesn’t actually work, thank goodness. It may be counterintuitive, but the countries with the most deaths have among the fastest-growing populations in the world. This is because the women in these countries tend to have the most births, too. Scholars debate the precise reasons why, but the correlation between child death and birth rates is strong.

Take Afghanistan, where child mortality—the number of children who die before turning five years old—is very high. Afghan women have an average of 6.2 children. As a result, even though more than 10 percent of Afghan children don’t survive, the country’s population is projected to grow from 30 million today to 55 million by 2050. Clearly, high death rates don’t prevent population growth (not to mention the fact that Afghanistan is nobody’s idea of a model for a prosperous future).

When children survive in greater numbers, parents decide to have smaller families. Consider Thailand. Around 1960, child mortality started going down. Then, around 1970, after the government invested in a strong family planning program, birth rates started to drop. In the course of just two decades, Thai women went from having an average of six children to an average of two. Today, child mortality in Thailand is almost as low as it is in the United States, and Thai women have an average of 1.6 children.

If you look at the graph below of Brazil, you’ll see the same thing: As the child mortality rate declined, so did the birth rate. I’ve also charted the population growth rate, to show that the country’s population grew more slowly as more children survived. If you graphed most South American countries, the lines would look similar. 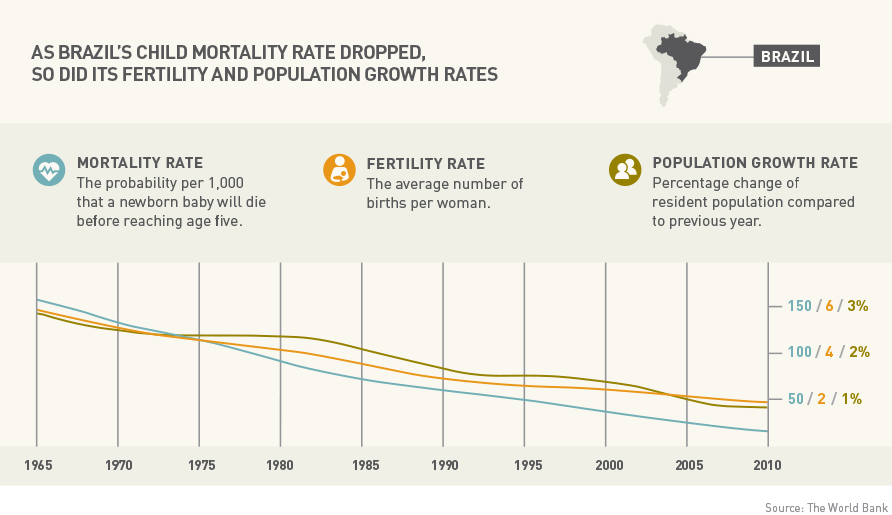 This pattern of falling death rates followed by falling birth rates applies for the vast majority of the world. Demographers have written a lot about this phenomenon. The French were the first to start this transition, toward the end of the 18th century. In France, average family size went down every decade for 150 years in a row. In Germany, women started having fewer children in the 1880s, and in just 50 years family size had mostly stabilized again. In Southeast Asia and Latin America, average fertility dropped from six or seven children per woman to two or three in a single generation, thanks in large measure to the modern contraceptives available by the 1960s.

Because most countries—with exceptions in sub-Saharan Africa and South Asia—have now gone through this transition, the global population is growing more slowly every year. As Hans Rosling, a professor at the Karolinska Institute in Sweden and one of my favorite data geeks, said, “The amount of children in the world today is probably the most there will be! We are entering into the age of the Peak Child!”

Given all the evidence, my view of a sustainable future is much more optimistic than the Malthusians’ view. The planet does not thrive when the sickest are allowed to die off, but rather when they are able to improve their lives. Human beings are not machines. We don’t reproduce mindlessly. We make decisions based on the circumstances we face.

Here’s an example: Mothers in Mozambique are 80 times more likely to lose a child than mothers in Portugal, the country that ruled Mozambique until 1975. This appalling aggregate statistic represents a grim reality that individual Mozambican women must confront; they can never be confident their children will live. I’ve spoken to mothers who gave birth to many babies and lost most of them. They tell me all their mourning was worth it, so they could end up with the number of surviving children they wanted.

When children are well-nourished, fully vaccinated, and treated for common illnesses like diarrhea, malaria, and pneumonia, the future gets a lot more predictable. Parents start making decisions based on the reasonable expectation that their children will live.

Death rates are just one of many factors that affect birth rates. For example, women’s empowerment, as measured by age of marriage and level of education, matters a great deal. Girls who marry in their mid-teens tend to start getting pregnant earlier and therefore have more children. They usually drop out of school, which limits their opportunities to learn about their bodies, sex, and reproduction—and to gain other kinds of knowledge that helps them improve their lives. And it’s typically very difficult for adolescent brides to speak up in their marriages about their desire to plan their families.

I just traveled to Ethiopia, where I had a long conversation with young brides, most of whom were married at 11 years old. They all talked about wanting a different future for their children, but the information they had about contraceptives was spotty at best, and they knew that when they were forced to leave school their best pathway to opportunity was closed off.

In fact, when girls delay marriage and stay in school, everything changes. In a recent study of 30 developing countries, women with no schooling had three more children on average than women who attended high school. When women are empowered with knowledge and skills, they start to change their minds about the kind of future they want.

I recently spent an afternoon with a woman named Sadi Seyni, who scratches out a living for five children on an arid farm in a desert region of Niger. She didn’t know about contraceptives when she got married as a teenager. Now she knows, and she’s spacing her pregnancies several years apart, to protect her health and the health of her newborns. I visited the place where she learned about family planning: her village’s well, where women go to talk. And talk. And talk. While we were telling stories, a young bride came to get water. Through a translator, this girl told me that her pregnancies were “God’s will” and therefore out of her control. Sadi suggested that as long as this girl keeps coming to the well and listening, she’ll change her view over time. Even the informal education that happens when a little knowledge spreads among friends transforms the way people think about what’s possible.

It is important to note that the desire to plan is only part of the equation; women need access to contraceptives to follow through on their plan. Sadi lives a stone’s throw away from a health clinic, but it doesn’t carry the contraceptive injections she prefers. She has to walk 10 miles every three months to get her shots. Sadi is incensed, as she should be, about how difficult it is for her to care for her family. Many women like Sadi have no information about planning their pregnancies in a healthy way—and no access to contraceptives. More than 200 million women say they don’t want to be pregnant but aren’t using contraceptives. These women are being robbed of opportunities to decide how to raise their families. And because they can’t determine how many children to have or when to have them, they also have a harder time feeding them, paying for medical care, or sending them to school. It’s a vicious cycle of poverty.

On the other hand, the virtuous cycle that starts with basic health and empowerment ends not only with a better life for women and their families, but with significant economic growth at the country level. In fact, one reason for the so-called Asian economic miracle of the 1980s was the fact that fertility across Southeast Asia declined so rapidly. Experts call this phenomenon the demographic dividend. As fewer children die and fewer are born, the age structure of the population gradually changes, as you can see in the graphic below.

Eventually, there’s a bulge of people in their prime working years. This means more of the population is in the workforce and generating economic growth. At the same time, since the number of young children is relatively smaller, the government and parents are able to invest more in each child’s education and health care, which can lead to more economic growth over the long term.

These changes don’t just happen by themselves. Governments need to set policies to help countries take advantage of the opportunity created by demographic transitions. With help from donors, they need to invest in health and education, prioritize family planning, and create jobs. But if leaders set the right strategic priorities, the prospect of a virtuous cycle of development that transforms whole societies is very real.

The virtuous cycle is not just development jargon. It’s a phenomenon that millions of poor people understand very well, and it guides their decisions from day to day. I have the privilege of meeting women and men in poor countries who commit the small acts of love and optimism—like going without so they can pay their children’s school fees—that propel this cycle forward. The future they hope for and work hard for is the future I believe in.

In this version of the future, currently poor countries are healthier, richer, and more equal—and growing sustainably. The alternate vision summed up by the Malthusian myth—a world where sustainability depends on permanent misery for some—is a misreading of the evidence and a failure of imagination.

Saving lives doesn’t lead to overpopulation. In fact, it’s quite the opposite. Creating societies where people enjoy basic health, relative prosperity, fundamental equality, and access to contraceptives is the only way to secure a sustainable world. We will build a better future for everyone by giving people the freedom and the power to build a better future for themselves and their families.

Melinda Gates, co-chair and trustee of the Bill and Melinda Gates Foundation, shapes and approves the foundation’s strategies, reviews results, and sets the overall direction of the organization. The following post is Part Three of the 2014 Gates Annual Letter and is reprinted with permission. Read the letter in full here.