Driving down global emissions of climate destabilizing carbon dioxide by at least 50 percent by 2050 may be necessary to avoid the most dangerous impacts of global climate change (IEA 2010). To achieve these deep emissions declines while supporting continued economic growth and expanded energy access, particularly in the world's emerging economies, the world's economies must rapidly decarbonize, reducing the amount of CO2 produced for each unit of economic activity at greater than 4 percent per year (IEA 2010).

That may not sound like much, but such rates are more than three times greater than the 1.3 percent per year global average rate sustained since the 1860s (Nakicenovic 1997).

Even at a national scale, achieving a 4 percent per year or greater rate of decarbonization is unprecedented in recent history, according to new analysis from the Breakthrough Institute, which examines historic decarbonization rates among developed nations in the Organization for Economic Cooperation and Development (the OECD).

This analysis examines historic decarbonization rates in 26 OECD member nations from 1971-2006. The following OECD member nations are excluded due to lack of key data: Estonia, Slovenia, Iceland, Luxemborg, the Czech Republic, the Slovak Republic. All other OECD nations are included. Data on GDP and population is drawn from Angus Maddison, while energy and CO2 emissions data is from the International Energy Agency (IEA) energy statistics database.

Only five nations achieve sustained decarbonization rates more than double the long-term global historic average: Sweden (at 3.6 percent per year), Ireland (at 3.2 percent), the UK and France (each at 2.8 percent), and Belgium (at 2.6 percent).

Six other nations achieved rates between 50 and 100% greater than the global average rate: Germany (2.5 percent per year), the United States, Denmark, and Poland (each at 2.3 percent), Hungary and the Netherlands (at 2.0 percent). 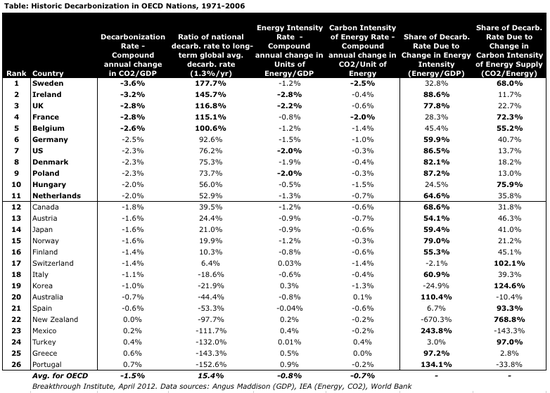 The Drivers of Decarbonization

For the top five fastest decarbonizers, a split can be observed, with Sweden and France each relying predominately on decarbonizing their energy supplies, while Ireland and the United Kingdom rely principally on gains in energy intensity. Decarbonization in Belgium is driven fairly evenly on both factors. Two divergent strategies for decarbonization are immediately apparent here:

Sweden and France each achieved rapid rates of decarbonization of their economies via state-led transformations of their energy supplies. Following the oil shocks of the 1970s, Sweden and France each directed state-owned utilities to fully displace oil from the electricity sector, principally by scaling up new nuclear power programs. A lack of indigenous coal resources and fresh memories of conflict with coal-exporting Germany in World War II also contributed to France's push to scale-up nuclear power to displace coal as well as oil from the nation's power generation mix.

As the graph below demonstrates, the fairly rapid scale-up of nuclear power from 1971 until about 1986 displaces oil in Sweden's primary energy supply by virtually eliminating oil-fired power plants from the nation's electricity mix. Sweden's total primary energy supply is now composed largely of nuclear and hydro in the power sector and oil for transportation, as well as moderate amounts of renewables (primarily biomass for heating). Sweden's primary energy mix is now 65 percent zero-carbon and composed of a blend of hydropower, nuclear power, and biomass, with almost no coal. 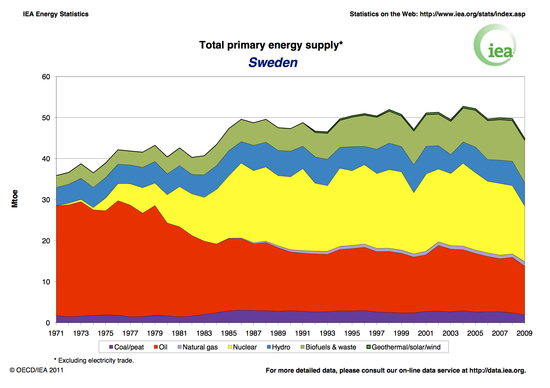 Likewise, the following graph illustrates the displacement of both oil and coal in power generation as France steadily scaled up its nuclear power program. France's nuclear policy has been characterized by direct and sustained government involvement in the research, development and deployment of nuclear power technologies. Perhaps the most important aspect of French nuclear policy is its procurement strategy, which is centered on producing one standard nuclear technology, the pressurized water reactor, from a single manufacturer, Framatome (now Areva NC), which is partially owned by the government. By focusing on a single type of reactor, the government encouraged standardization, economies of scale, rapid construction and quick installation in the emerging nuclear industry. As a result of these federal policies, France had 59 nuclear reactors generating over 63 gigawatts of electricity by 2007, accounting for over 75% of its electricity supply. With the inclusion of hydroelectric power, 90% of France's electricity is supplied by these two sources. 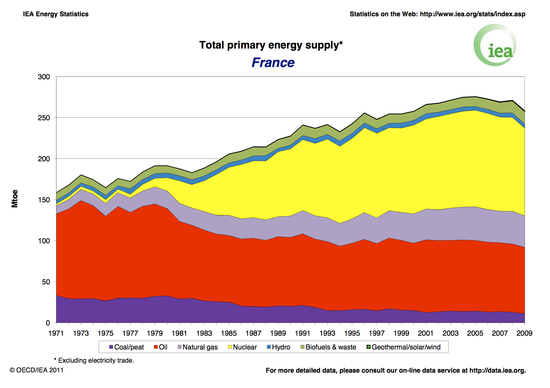 Ireland and the United Kingdom: Deindustrialization and Sectoral Changes in the Economy

Additionally, the UK electricity mix shifted heavily from coal-fired power to natural gas in the "Dash for Gas" in the 1990s, following Margaret Thatcher's battle with the coal mining unions and the newly abundant production of North Sea gas fields (see graph below). Owing to the lower carbon output of natural gas relative to coal, the Dash for Gas contributed to the decarbonization of the UK energy supply, but it also helped drive energy intensity gains, as older coal-fired power stations were replaced by modern, combined cycle natural gas plants with operating efficiencies almost double that of an older coal-fired plant. 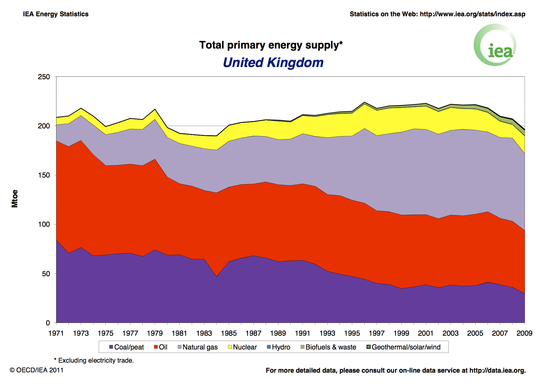 Indeed, until the 1990s, the United Kingdom had implemented little in the way of aggressive energy efficiency policies or measures, according to the IEA. The United Kingdom's rapid rates of energy intensity improvement thus owe much more to deindustrialization and the changing makeup of both the UK economy and power generating sector than to aggressive efforts to improve the efficiency of end-use energy consumption.

Similarly, Ireland underwent a substantial economic transition during the period 1971 to 2006. While manufacturing held a relatively constant share of Ireland's GDP over this period, the nation saw the share of GDP derived from the relatively energy-intensive agriculture sector fall from 15 percent in 1971 to just 1 percent in 2006. At the same time, the share of GDP from services other than retail & wholesale trade, restaurants and hotels roughly doubled in share, from 22 percent of Ireland's economy in 1971 to 41 percent in 2006. It is thus conceivable that sectoral economic transitions also account for the large bulk of Ireland's improvement in energy intensity over this time period.

First, it is apparent that rapid rates of decarbonization nearing 4 percent per year can be driven by state-led efforts to develop and deploy zero-carbon energy technologies to decarbonize energy supply. Sweden and France achieve sustained accelerated improvements in the carbon intensity of energy supply of 2.5 percent and 2 percent per year, respectively, from 1971 to 2006, roughly double any other OECD nation over this period.

These examples also prove the limits of decarbonization strategies constrained to the power supply sector alone, however, as oil consumed in transportation remains a substantial contributor to the remaining carbon intensity and CO2 emissions of Sweden and France's primary energy supply.

While sectoral economic transitions are largely outside the domain and impact of energy policy and deindustrialization is hardly a global strategy for rapid decarbonization, it appears that history presents at least one replicable strategy to accelerate the pace of decarbonization: the directed decarbonization of global energy supplies via the state-led development and deployment of scalable zero-carbon energy technologies.

While nuclear power was the principal tool of decarbonization in Sweden and France, neither nuclear or any other particular technology would necessarily be essential to the replication of this strategy. Rather, while the ready availability of one or more scalable, relatively affordable zero-carbon energy technologies would be necessary to pursue this strategy, the active role of the state in driving energy technology development and deployment and the transformation of the national energy system appears to be the key salient factor.