Where's the Evidence That Poor Countries Are Leapfrogging Fossil Fuels?

As the report concludes,

"Most of the future increase in energy demand will occur in the global south as developing nations seek to meet international goals to reduce energy poverty and keep pace with population growth. Because of this rising demand, developing nations will need to significantly increase their energy supplies."

So far so good – few would disagree with this. And there’s some good news in the report. According to the report, power demand is expected to grow most robustly in Africa and Asia, precisely the regions most steeped in energy poverty.

But in their accounting of clean energy supply growth in emerging markets, the report surveys countries that do not provide an accurate snapshot of electrification and power technology deployment across the world today. The 10 countries selected for the report – Bulgaria, Kenya, Morocco, Pakistan, Peru, the Philippines, Taiwan, Thailand, Ukraine, and Vietnam – exclude important countries like India, Indonesia, Nigeria, and Ethiopia. The report also omits middle-income countries like China and South Africa, where power demand is still growing at a rapid clip and still largely coal-powered.

I spoke with Todd Moss, Senior Fellow at the Center for Global Development, about their selection. “It looks like they took the top 10 biggest emerging markets in terms of new clean energy investment and then defined this group as 'emerging markets,'” he said. “That’s like saying, ‘Boy, the top 10 home-run hitters sure do hit a lot of home runs!’”

But even within the countries Pew focuses on, their conclusions are hard to defend. The report states that “deployment of clean energy dwarfs that of fossil energy in emerging markets from 2009 to 2013.” The graph used to illustrate this seems to corroborate this, if you don’t look too closely: 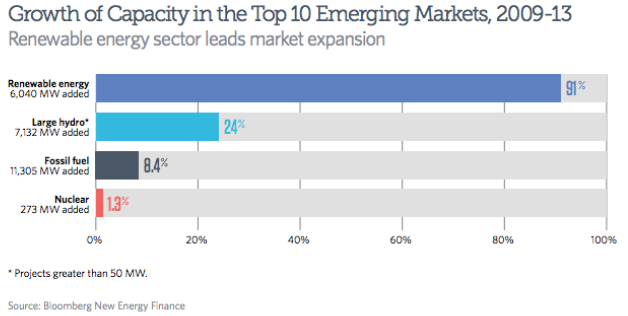 What the graph above actually shows is that, while non-hydro renewables have the highest growth rate, fossil fuels actually added nearly twice as much capacity (11.3 gigawatts of fossil compared to 6 gigawatts of renewables). What’s more, the report finds that more than three-quarters of non-hydro renewables deployed were solar and wind, which have lower capacity factors than fossil energy or renewables like hydro and biomass. Taking capacity factors into account, it’s likely that fossil energy accounted for at least four times as much new energy supply as non-hydro renewables in these 10 countries. How the report can display these numbers and claim that renewables “dwarf” new fossil in emerging markets is something of a mystery.

As a recent Manhattan Institute report titled Not Beyond Coal by Robert Bryce concludes, coal was the leading supply of new power demand over the last decade. Using more comprehensive global data, Bryce finds, “Since 2003, global coal consumption has increased by about 24.4 million barrels of oil equivalent per day...nine times faster than the growth seen in wind energy consumption and 40 times that of solar energy.”

Similarly, while media stories of energy access often focus on rural villages and solar panels, the World Bank reported this week that 80 percent of electrification from 2010 to 2012 occurred in cities, which tend to be grids connected to large power plants, typically fossil or large hydroelectric.

There are encouraging signs ahead for clean energy. The renewable energy investment tallied in the report, both hydro and non-hydro, is a move up the energy ladder from wood and dung, which remain the primary energy supply for billions of people. Coal growth is slowing in China, and globally, renewable energy may be finally eating into the market dominance of fossil energy. Fossil fuels are not the only thing powering growth, and that’s a good thing. (Although as we’ve written before, it’s hard to tell poor countries that they shouldn’t develop using the same cheap and abundant energy resources that rich countries are still using to this day.)

But selective reporting and spurious conclusions do not advance the conversation around clean energy, especially when we’re talking about the world’s poorest countries. If this is the evidence behind claims that emerging economies are “leapfrogging” the fossil-fueled grids used by developed nations, then that narrative may be a lot less reliable than its proponents suggest.