A very big report came out last month with very little fanfare. It concluded what we in nuclear science have been saying for decades – radiation doses less than about 10 rem (0.1 Sv) are no big deal. The linear no-threshold dose hypothesis (LNT) does not apply to doses less than 10 rem (0.1 Sv), which is the region encompassing background levels around the world, and is the region of most importance to nuclear energy, most medical procedures and most areas affected by accidents like Fukushima.

The United Nations Scientific Committee on the Effects of Atomic Radiation (UNSCEAR) (UNSCEAR 2012) submitted the report that, among other things, states that uncertainties at low doses are such that UNSCEAR “does not recommend multiplying low doses by large numbers of individuals to estimate numbers of radiation-induced health effects within a population exposed to incremental doses at levels equivalent to or below natural background levels.” (UNDOC/V1255385)

Finally, the world may come to its senses and not waste time on the things that aren’t hurting us and spend time on the things that are. And on the people that are in real need. Like the infrastructure and economic destruction wrought by the tsunami, like cleaning up the actual hot spots around Fukushima, like caring for the tens of thousands of Japanese living in fear of radiation levels so low that the fear itself is the only thing that is hurting them, like seriously preparing to restart their nuclear fleet and listening to the IAEA and the U.S. when we suggest improvements.

Note – although most discussions are for acute doses (all at once) the same amount as a chronic dose (metered out over a longer time period like a year) is even less effecting. So 10 rem (0.1 Sv) per year, either as acute or chronic, has no observable effect, while 10 rem per month might.

The Japanese people can start eating their own food again, and moving back into areas only lightly contaminated with radiation levels that are similar to background in many areas of the world like Colorado and Brazil.

The huge waste of money that is passing for clean-up now by just moving around dirt and leaves (NYTimes) can be focused on clean-up of real contamination near Fukushima using modern technologies. The economic and psychological harm wrought by the wrong-headed adoption of linear no-threshold dose effects for doses less than 0.1 Sv (10 rem) has been extremely harmful to the already stressed population of Japan, and to continue it would be criminal.

To recap LNT, the Linear No-Threshold Dose hypothesis is a supposition that all radiation is deadly and there is no dose below which harmful effects will not occur. Double the dose, double the cancers. First put forward after WWII by Hermann Muller, and adopted by the world body, including UNSCEAR, its primary use was as a Cold War bargaining chip to force cessation of nuclear weapons testing. The fear of radiation that took over the worldview was a side-effect (Did Muller Lie?). 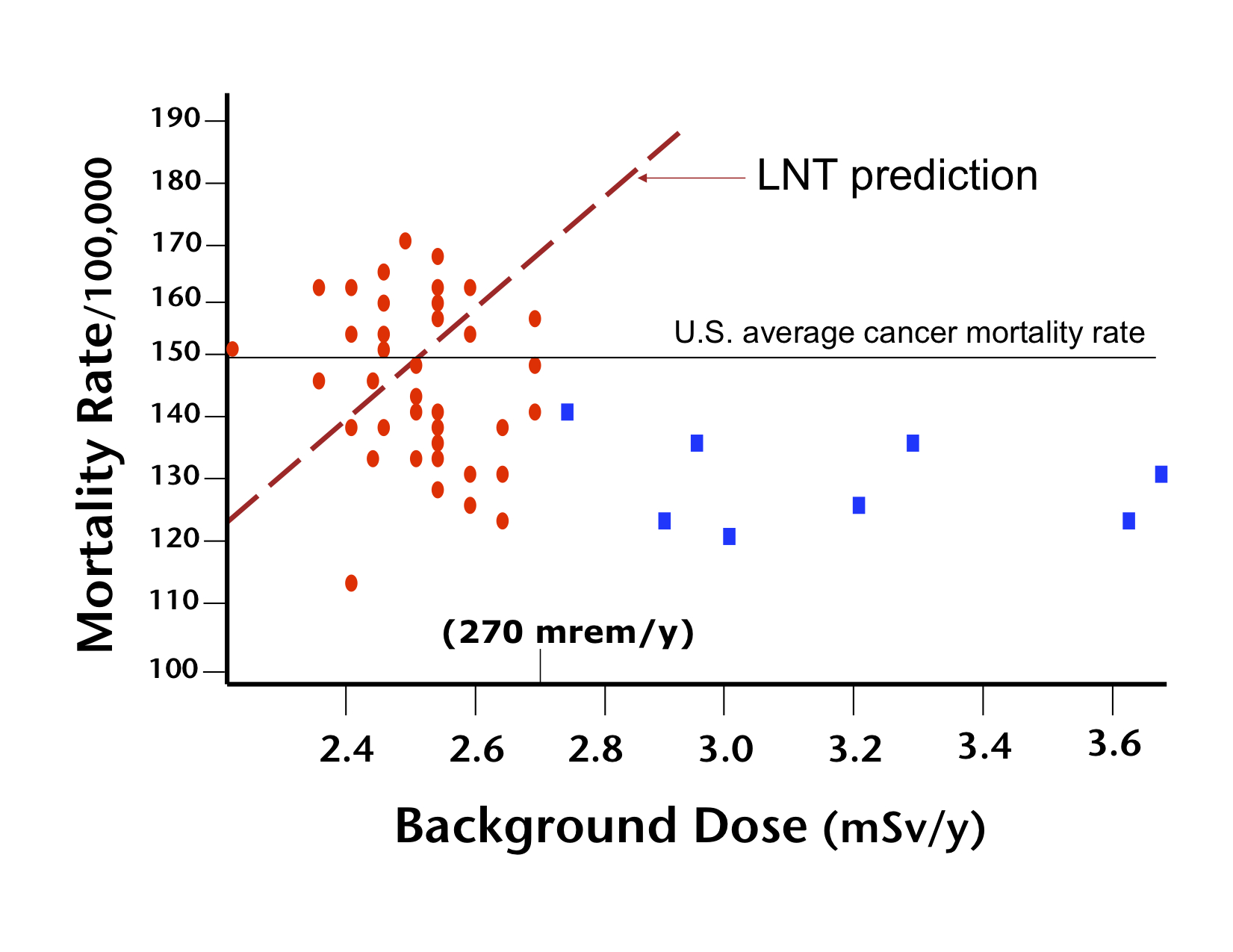 Background Radiation Differences on Annual Cancer Mortality Rates/100,000 for each U.S. State over a 17-Year Period. There is no correlation with radiation dose. States with significantly higher doses, greater than 2.7 mSv/year (270 mrem/year) like Colorado, have lower cancer rates than States with much lower average doses like Georgia, and vice versa. (from Frigerio and Stowe, 1976 with recent radon data)

Of course, doubling the dose doesn’t double the cancers below 10 rem/yr (0.1 Sv/yr). It has no effect at all. The millions of nuclear workers that have been monitored closely for 50 years have no higher cancer mortality than the general population but have had several to ten times the average dose. People living in New Mexico and Wyoming have twice the annual dose as those in Los Angeles, but have lower cancer rates. These cannot occur if LNT were true, because LNT states this could not occur.

Although rarely discussed, LNT does not take into account the organisms immune system, biological recovery time between doses or other relevant mechanisms that operate at low doses on an actual organism versus cells in a petri dish.

UNSCEAR is an independent body of international experts that has met regularly since 1955 and helped establish radiation as the best understood, though weakest, carcinogenic agent in the world through its studies of atomic bomb survivors, the effects of the Chernobyl accident, industrial radiological accidents, and medical radiation treatment.

Many of us have been at them for years to stop procrastinating and prevaricating on something so important that the inaction itself is harmful. This report is a welcome change. The report, approved by the United Nations General Assembly, will now serve to guide all countries of the world in setting their own national radiation safety policies.

This is incredibly important to Japan where national guideline changes have been horribly over-reactive in response to Fukushima, especially for food, using LNT in a way it should not be used.

Regulatory Limits On Radioactivity In Foods (in Bq/kg)*

Accepted global limits on radioactivity levels in foods is 1000 Bq/kg (1,200 Bq/kg in the U.S.). Dominated by cesium-137 and Sr-90, these levels were set by organizations like the IAEA and UNSCEAR after decades of study. Because of public radiation fears broadcast in the press after the Fukushima accident, Japan cut the limit in half hoping it would have a calming influence. But the level of fear remained high, so Tokyo lowered the limits to one-tenth of the international standards.

This was supposed to induce calm? Telling the public that radiation is even more deadly than they thought? That their food is toxic? Were they nuts?

This has had the unintended consequence of making people even more afraid of what they are eating, moving safe foods into the scary category and limiting food exports, causing even further economic and social damage.

Suddenly, all sorts of normally safe foods are now banned. Wild mushrooms from Aomori Prefecture are now banned because they have cesium levels of about 120 Bq/kg. This cesium has nothing to do with Fukushima, it’s the same type as is in everyone’s food around the world, and it wouldn’t have rated a second look before the accident (Japan’s Contamination Limits Way Too Low).

The Japanese people should not be punished for nothing. But these new results and the UNSCEAR reports demonstrate that they are being punished. There was no reason to lower the rad limits on food, especially after the short-lived nuclides have long decayed away. One of the incorrect assumptions was that people in Japan would be eating only contaminated food, which is quite wrong. The international limits were set for very good reasons, lowering them makes no sense except to further hurt farmers and consumers in Japan.

UNSCEAR’s chair Wolfgang Weiss stated that no radiation health effects had been observed in Japan among the public, workers or children in the area of the damaged nuclear power plants, in keeping with studies already published by the World Health Organization and Tokyo University. Doses of radiation received by people near the damaged power plant were so low that no discernible health effect could be expected.

The Japanese government, for all its failures, did the right thing in evacuating Fukushima Prefecture quickly and by preventing contaminated food and water from being consumed. This was in stark contrast to Chernobyl where the Soviets intentionally kept the public in the dark.

Ingestion of the short-lived isotope iodine-131, with its well-known risk of thyroid cancer when absorbed in the thyroid glands of children and young people, was the only major radiation-related health effect of the Chernobyl accident on the public. And the Soviets could have prevented that by acting quickly and openly. Of course, the Soviets didn’t much care about the public.

This will not happen in Japan. Iodine-131, with a half-life of only 8 days, decayed away in a few months following the accident and no one was found to have ingested any significant amount.

According to the reports, six Fukushima workers received total doses of over 0.25 Sv (25 rem) during their time fighting the emergency, while 170 workers received doses between 0.1 and 0.25 Sv (10 to 25 rem). None have shown ill effects and most likely never will. Radiation played no role in the coincidental deaths of six Fukushima workers in the time since the accident, who died from accidents, e.g., being crushed by debris or being swept out to sea.

The effects of radiation only start to become clear at high acute absorbed doses of over 1 Sv (100 rem), and even then it is necessary to eliminate other potential causes before radiation can be unequivocally said to be the cause, advised UNSCEAR.

What this means for nuclear waste disposal is even more dramatic, but more on that later!

In the end, if we don’t reorient ourselves on what is true about radiation and not on the fear, we will fail the citizens of Japan, Belarus and the Ukraine, and we will continue to spend time and money on the wrong things. I’m sure the anti-nuke ideologues and conspiracy theorists will not accept these U.N. reports, but then…they don’t like the United Nations anyway.