Last Tuesday, energy officials in Saudi Arabia announced plans to become a major nuclear energy state, assuring the reactors would be used only for peaceful purposes (The Nuclear Wire). They intend to move fast, beginning construction by year’s end.

The Saudi Royal Family hopes that nuclear will provide 15 percent of the Kingdom’s power (18 GWe) within 20 years, together with a similar 15 percent (40 GWe) from solar (WNN). They are planning to invest $80 billion to build more than a dozen nuclear power plants as fast as possible, intending for the first reactor to come online in only eight years.

Investment in solar for the same energy production will take about $240 billion in investment, although breakthrough technologies in the next decade should cut that cost in half. 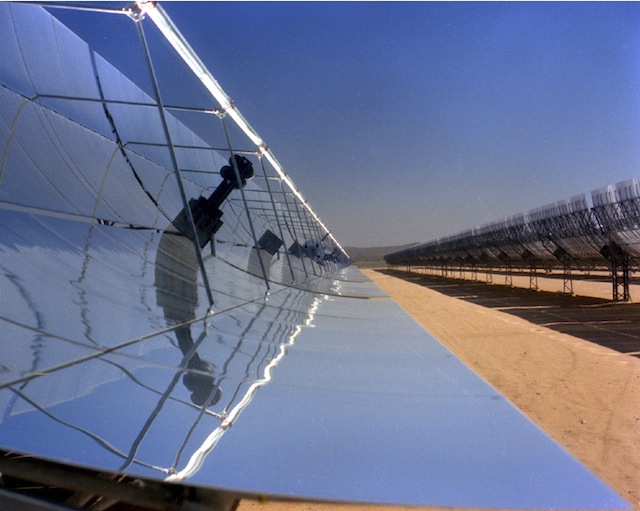 Nuclear and solar are especially good for cogeneration of electricity and heat for desalination and have become central to Saudi Arabia energy strategy. With over 500,000 square miles of arid cloudless land, the Kingdom is well suited to concentrating solar technologies (above). But renewables need a base load source like nuclear for support (below). The Royal Family hopes that nuclear will provide 15 percent of the Kingdom’s power within 20 years, together with a similar 15 percent from solar. Sources: Sandia National Laboratory and the Nuclear Energy Institute. 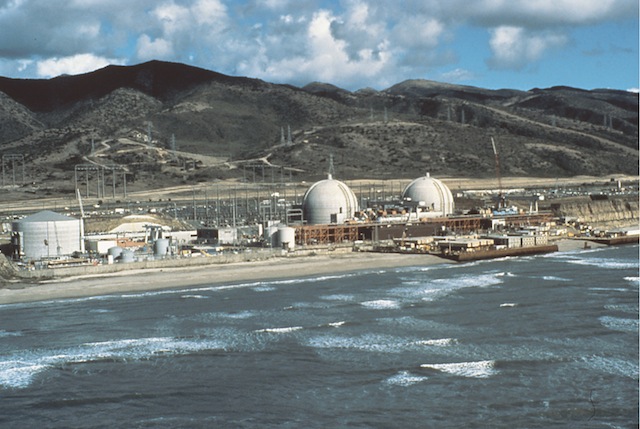 Americans are not generally aware that the two largest uses of power in the Middle East are for desalinating seawater and residential cooling. Saudi Arabia desalinates over 250 billion gallons of seawater each year, and that number will double in the next 10 years as the population and industrialization increase.

More than 50 percent of the Kingdom’s energy use is residential and the average energy use per person per year is over 6,000 kWhs, putting the Saudi people as a whole firmly in the middle class, and on the path we want for all humanity (The Middle Class, Energy And Terrorism). But according to the Gulf Research Center, Saudi Arabia’s growing population and urbanization is putting pressure on even its huge oil supplies.

To help address their energy needs, the Saudi energy sector has been restructured to incentivize both private and public investments in energy. Industrial consumers are now allowed to generate their own power and sell excess back to the government. Parts of the state-owned Saline Water Conversion Corporation will be privatized.

But the biggest change to their energy sector is a focus on renewables and nuclear for new generating capacity. Nuclear and solar are especially suited to cogeneration of electricity and heat for desalination and have become central to the Kingdom’s energy strategy.

With more than 500,000 square miles of arid cloudless land, Saudi Arabia is well suited to both photovoltaic and concentrating solar technologies. And to have significant renewables over such a large area separated by long distances from the main population centers, there has to be sufficient base load capacity for support. And that is nuclear’s primary strength.

“The development of atomic energy is essential to meet the Kingdom’s growing requirements for energy to generate electricity, produce desalinated water, and reduce reliance on depleting hydrocarbon resources,” say Saudi energy officials. The possible sites for these Gen III reactors include Jubail on the Persian Gulf and Rabuk and Jizan on the Red Sea (Neutron Bytes). The reactors would power their own desalination plants for water.

Since Saudi Arabia burns almost a billion barrels of oil a year to produce electricity, this change in production is critical to their economic future. It is much more profitable to sell their oil and gas to China and the West instead of burning it for power. The cost of the oil used to burn to produce electricity is heavily subsidized by the government, which increases waste and inefficiency and is detrimental to their overall GDP. Saudi officials are worried that the present trend of increasing oil use in the Kingdom will hurt their economy in only a few short years, so this change is needed right now.

The Saudis are not alone in the region in wanting nuclear and renewables to replace their precious oil and gas in generating power. Abu Dhabi in the United Arab Emirates (UAE) is building four nuclear reactors at Barakah for just this reason (ENEC). In Dubai’s 20-year plan, Saeed Mohammed Al Tayer of the Supreme Council of Energy predicted that “twenty percent of [Dubai’s] energy supply will in future be drawn from a peaceful civil nuclear program.”

Recently the UAE opened what was, at the time, the largest solar plant in the world, the 100 MW Shams 1 at a cost of about $600 million. But two hundred Shams 1 arrays will be needed to equal the output of the four Barakah nuclear reactors when Kepco brings them online for Abu Dhabi in several years.

The Saudis understand this math. Nuclear is the best long-term baseload source they could have. Not to mention when a country goes nuclear it attains a certain level of respect from its neighbors. Just ask Iran (The Iranian Nuclear Deal Is A Good One).

With more than a dozen reactors in the plan, global competition for the Saudi contracts is fierce. In September 2013, both GE Hitachi Nuclear Energy and Toshiba/Westinghouse signed contracts with Exelon Nuclear Partners to pursue reactor construction deals with the Saudis. France’s Areva and EdF have signed a number of agreements with Saudi companies and universities. The Saudis have agreements with Argentina and South Korea, and other deals are in the works with Russia, the Czech Republic, and the United Kingdom. There is even a deal emerging with the China National Nuclear Corporation.

The reason so many agreements are in place is that Saudi energy officials are being cautious, not wanting to put all their eggs in one basket, and are looking for multiple vendors for the various major components like reactors, steam generators, turbines, back-up generation, and buildings.

Unfortunately, American nuclear companies may not take part in this project, or in others that are starting in the region, unless these countries sign a 1-2-3 Agreement with the United States required by our Atomic Energy Act (Neutron Bytes). 1-2-3 Agreements are meant to discourage activities like uranium enrichment and reprocessing of spent fuel that can also be used for weapons production, while encouraging activities that are only for peaceful nuclear energy.

It seems strange that our great ally in the region hasn’t agreed to a non-proliferation agreement of some sort with the United States, although they do have a safeguards agreement in force with the International Atomic Energy Agency, the agency that would be overseeing these nuclear reactors from a nuclear safety and security standpoint (IAEA).

To get non-proliferation agreements with these new nuclear countries, we must convince them to trust that the nuclear supplier countries like Canada, France, Russia, and the UK, will supply their fuel, critical technology and other services dependably – that they won’t be used in political maneuverings. This latter worry is the official reason that Iran has pursued its own enrichment capability, and is not a trivial concern.

Iran is positioning itself to enrich uranium for many countries in the region, perhaps even its enemies like Saudi Arabia, part of Iran’s dream of becoming the main nuclear player in the Middle East (Gulf Cooperation Council).

But how will the Sunni-Shia conflict play out as the Middle East goes nuclear? Iran is the only Shia-led government in this potential nuclear group. Saudi Arabia is Sunni. Jordan, which recently discovered huge uranium reserves within its borders, is Sunni. The wealthy moderate nations like Qatar and the UAE are Sunni. Turkey, the biggest military power in the region and a NATO member, is Sunni.

Of course, ISIS and al-Qaeda are also Sunni, so it is difficult to predict how nuclear energy in the region will be affected by this fourteen-hundred-year-old dispute.

But one thing is for sure – the Kingdom of Saudi Arabia, with the largest petroleum reserves in the world, will soon enter the global nuclear community.

James Conca is a scientist in the field of the earth and environmental sciences, specializing in geologic disposal of nuclear waste, energy-related research, subsurface transport, and environmental clean-up of heavy metals. Follow Jim on Twitter and see his and Dr. Wright’s book. This post originally appeared at Jim’s Forbes blog.