In the last few years, there has been a growing consensus among scholars and wonks that the rest of the world will follow the West in living modern lives complete with modern infrastructure, industry, and development. The question is not whether poor countries will develop and lead high-energy lives, but how much more energy they will consume and how much of it will come from low-carbon sources.

In April, an international group of experts argued for “a massive expansion of energy systems … in combination with the rapid acceleration of clean energy innovation.” Morgan Bazilian, formerly of the National Renewable Energy Laboratory, and Roger Pielke Jr., of the University of Colorado Boulder, recently described how power generation in sub-Saharan Africa would need to increase 33-fold to reach South African levels. UC Berkeley’s Catherine Wolfram and coauthors have identified likely massive, non-incremental, and order of magnitude surges in energy consumption as poor people gain access to modern appliances.

When it comes to imagining future levels of energy consumption, however, some advocates have focused almost entirely on low-energy, rural electrification as opposed to the commercial/industrial sectors that drive energy demand and economic growth. A new report from the Sierra Club, for instance, acknowledges the developing world’s need for greater access to energy services and an “energy ladder.” But ultimately the report endorses a vision for energy access in which the world’s poor consume just 0.15 percent of the average Californian, home to Sierra Club headquarters and many of its high-energy staff and members.

In the report, titled Clean Energy Services for All (CES4All), greater access to home lighting, television, fans, mobile phone charging, and radio amounts to an individual consuming 10 kWh of electricity per year. The average American consumes over 13,000 kWh of electricity per year, while the average Californian consumes over 6,700 kWh. (And as Bill Gates recently reminded us, a standard US refrigerator — typified by the Center for Global Development’s Todd Moss’s fridge — uses as much electricity as nine Ethiopians.) 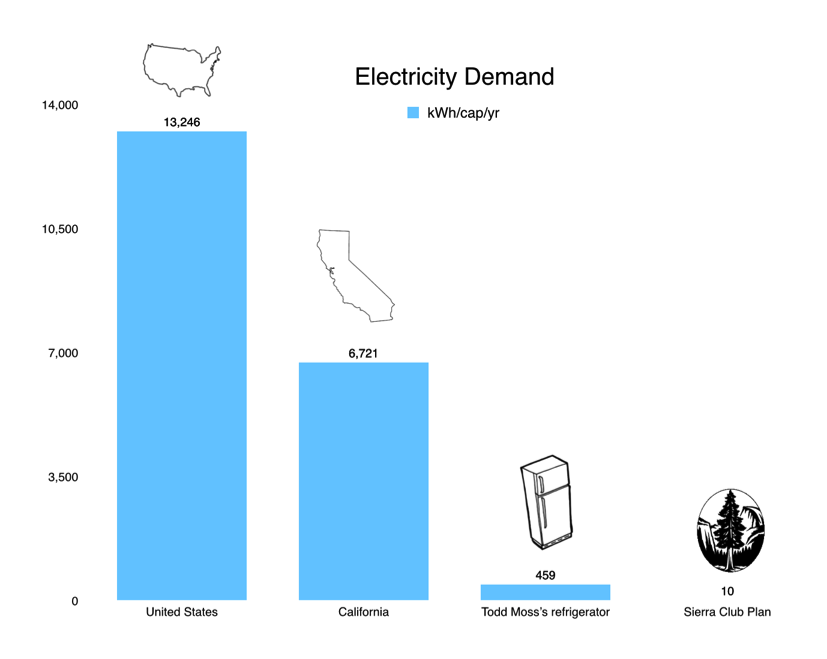 The authors justify their low-energy vision by its low cost. Achieving 10 kWh per person per year universally by 2030, the authors say, will cost $200 billion over 15 years. That’s a bargain compared to the IEA’s estimate of $640 billion to deliver 100 kWh per person per year to everyone who lacks electricity today. But it’s only a bargain unless you are one of the people consuming 0.15 percent the electricity of the average Californian. 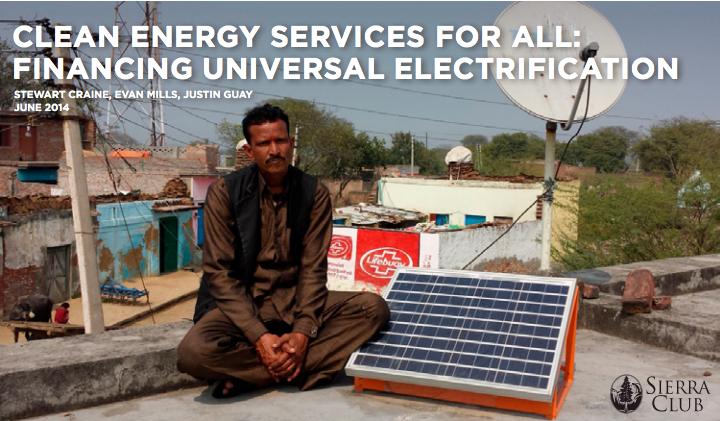 The report’s cover (pictured above) aptly captures this vision of low-energy societies: a man with a small solar panel — about enough to power a lightbulb or two — is a vision of, at best, charity for the world’s poor, not the kind of economic development that results in longer lives, higher standards of living, and stronger and more inclusive socioeconomic institutions.

Several times the authors defensively insist that their modeled pathway is just the beginning, not the end, of the energy ladder. "Lighting and mobile phone charging are the beginning,” they write, “not the end of energy access."

But they never deal with the implications of the full energy ladder, which is that levels of energy consumption in poor countries will rise 50 to 100 times higher through urbanization, agricultural intensification, industrialization, and the broader process of modernization. The authors have nothing to say about the traditional pattern of electricity expanding to cities, factories, and employees.

The authors are on the right track when they contend that energy services, and not abstract targets for kilowatt-hour consumption, are the right goal. But even here their exclusion of what scholars call “productive energy services” is a fatal flaw.

As the late Ghanian energy expert Abeeku Brew-Hammond observed, “There is an emerging consensus, based on the evidence from many energy access interventions around the world, that too narrow a focus on expanding energy delivery without adequate attention to productive uses for income generation yields little by way of socioeconomic development.”

In a series of case studies, Douglas Barnes warned, "The overemphasis on the economic benefits of rural electrification has meant a lack of proper perspective.” And a recent World Bank report concludes that a “bottom-up” strategy built on solar lanterns and microgrids will prove inefficient and unsuccessful unless designed in tandem with “top-down” investments in grid extension, industrialization, and broader infrastructure development.

The CES4All analysts point to endemic corruption as reason why grid extensions and industrial policy — which every other electrified country in the world has pursued — somehow cannot or will not be done in energy-poor countries:

Often, the poor have not been afforded access to modern energy services due to governance reasons as much as technological or economic reasons … The smaller project size associated with distributed clean energy removes the ability of governing elites to centralize and control resources and limits opportunities for corruption.

This kind of negativism toward the world’s poorest countries is historically inappropriate. In Our High-Energy Planet, we pointed to nations as diverse as Brazil, Vietnam, Mexico, and China that have all achieved very high levels of electrification. And each had their problems with corruption and poor governance, to put it mildly.

In their work, Catherine Wolfram and coauthors warn that the low-balling of energy projections risks becoming a self-fulfilling prophecy:

Current energy forecasts appear to understate the degree to which the distribution of economic growth affects demand … Underestimates of demand may lead to underinvestments in energy production, implying shortages and price spikes.

Reading the Sierra Club report, I’m inclined to think the risk is less that policy makers will follow its recommendations and more that it will be viewed as evidence that those who care about climate change in rich countries are trying to stop poor countries from developing modern, high-energy lives.