Why So Many Emerging Megacities Remain In Poverty

The big story of global economic development over the past several decades has been the steady march of urbanization and the development of mega-cities around the world. As I noted earlier this week, the percentage of the world's population that lives in cities has grown from less than a third in the middle of the twentieth century to more than half today.

Economists and urbanists have generally considered increasing urbanization to be a good thing. The long history of global cities — from ancient Rome to London and New York today — is a story of increasing progress and prosperity.

But those concerned with the "Global South" have rightly pointed to the persistent poverty in some large, dense cities of Africa, Asia, and Latin America. Consider the Democratic Republic of Congo’s Kinshasa — a booming megalopolis of 8.4 million in a country that has a GDP per capita of only $410.

This is the core paradox that Harvard economist Edward Glaeser turns to in his latest research, published as a National Bureau of Economic Research working paper in December.

Glaeser begins by calling attention the recent surge in what he calls "poor country urbanization." In 1960, the baseline year for much of his study, the poorest countries were also generally the most rural. Urbanization rates were under 10 percent in most of the countries that had per capita incomes below $1,000. There are no poor countries with rates of city living that low today. In fact, Glaeser cites United Nations data that tracked a huge increase in the urbanization rate of less developed countries, from 18 percent in 1950 to 47 percent in 2011.

In the years since 1960, we've seen the rise of cities like Karachi, Dakar, and Port-au-Prince. Notably, the huge swelling of cities including Dhaka, Bangladesh, and Nairobi, Kenya, points to a particular pattern, where poor countries generally see urbanization concentrated in just one mega-region.

Several charts from Glaeser’s paper show that the divergence between urbanization and national prosperity has been centered in developing nations over the last half-century. The first chart shows the positive relationship between baseline levels of urbanization in 1960 and economic development over the entire period. There is an overall positive relationship, though just a correlation. As Glaeser explains, "A ten percent higher level of urbanization among these poor countries in 1960 is associated with .23 log points faster growth between 1960 and 2010…The robust correlation should give us pause before embracing policies aimed at reducing the level of urbanization in a country." 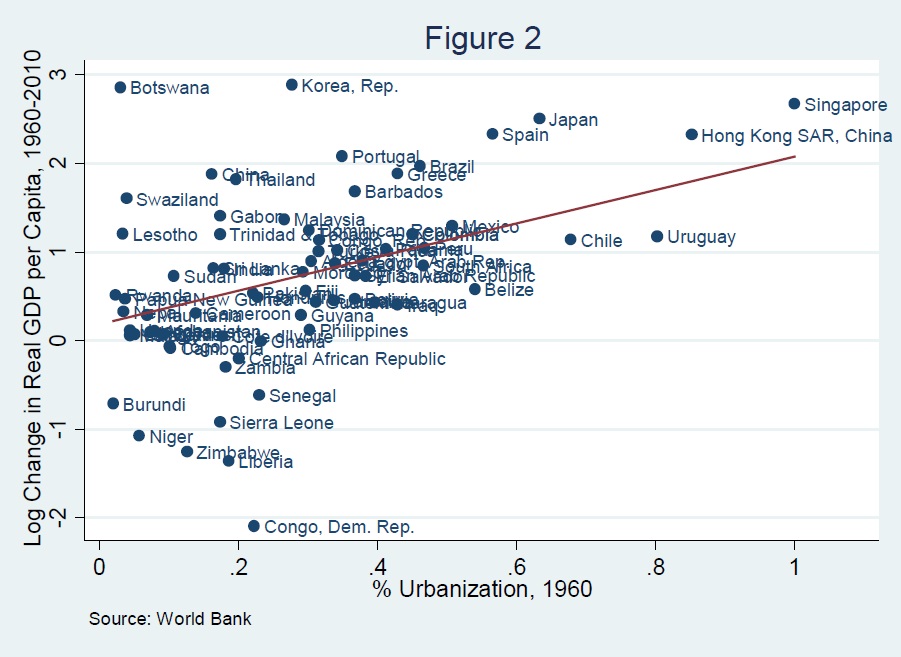 The next set of charts compares urbanization rates to GDP per capita — for 1960 (left, with GDP in 2012 dollars) and in 2010 (right). In 1960, the clustering and trending are very clear. Fifty years later, the chart is far messier.

"Not only has the overall level of urbanization increased, but the growth has been particularly dramatic among particularly poor places," Glaeser writes. These graphs are not an argument for a declining link between urbanization and income. Rather, he explains, they show just how significant the curious rise of very poor urbanizing nation has been.

What can explain this recent shift?

Glaeser’s paper suggests several factors are at work. Part of the answer comes from the shift to a more fully globalized economy and, in particular, the severing of the age-old connection between a city and the hinterlands it used to rely on for food and resources. Cities survived and thrived on the surplus food that their increasingly important rural regions provided. So the rise of New York couldn't have happened without the fostering of a productive and economically vibrant American breadbasket. The reverse is true as well.

But today's vast international shipping markets and a hugely interconnected global food supply means that cities no longer need to be so dependent on their own country's agricultural production. It is this broken link, Glaeser argues, that has allowed for the puzzling and concerning rise of urban cities in some of the world's most stubbornly poor countries.

Because trade has alleviated the need for agricultural productivity, cities can develop despite enormously poor hinterlands. This creates both an opportunity—the ability to escape terribly poor rural land—and a challenge. Massive cities can develop at far lower levels of income as we see across the world today.

Or, in more concrete terms, "Today, globalization means that Port-Au-Prince can be fed with imported American rice."

Many of these poor megacities have much weaker institutions and more problematic governing structures, according to Glaeser. As a result, they are far less able to handle the thorny problems they face, and their experiences don’t particularly resemble the more positive ones we are familiar with historically.

Here, he points to the particular challenges that these poorer cities have in managing the good and bad consequences of density. Glaeser notes that density generates both positive externalities — easier movement of goods over shorter distances, the spread of ideas, and the fostering of creativity — and negative ones — including higher levels of crime and congestion, and the spread of disease. Historically, cities have mitigated these negative effects through greater wealth or stronger institutions, from physical infrastructure to policing. As Glaeser writes, "Almost all of these problems can be solved by competent governments with enough money." The big problem facing many of the world's poorest megacities and global slums is that they lack both.

Still, the author of Triumph of the City remains unsurprisingly optimistic about the role that cities can play in global development. Even though urbanization is not a cure-all, Glaeser contends that cities give rise to the sorts of social movements that have brought and can bring about needed institutions, better policies, and greater accountability.

"The cities of the developed world have been wellsprings for the growth of politically-minded groups," he writes. "Indeed, it is possible that an urban contribution to the growth of institutional quality may be the most important urban benefit."

It’s good to see an urban economist of Glaeser’s stature focus on the pressing questions of the uneven development and inequality. The most important lesson is that urbanization is a necessary but insufficient part of global development, and must be paired with appropriate policies, institutions, and strategies.

Billions more people are going to make their homes in cities over the next several decades — many in the exact megacities and global slums where devastating poverty persists. We are going to spend tens if not hundreds of trillions on city building during this period. It is crucial that we get it right.

Richard Florida is cofounder and editor-at-large at The Atlantic Cities, where this article was originally published. He's also a senior editor at The Atlantic, director of the Martin Prosperity Institute at the University of Toronto's Rotman School of Management, and Global Research Professor at New York University.