Efforts to change what people eat are rarely successful. Despite years of calling for dietary changes, mounting evidence on meat’s large environmental footprint, and an ever-increasing array of vegetarian resources, our demand for animal products is not going down. Beef’s environmental impacts are most egregious, accounting for 41% of global livestock sector emissions, and while per-capita beef consumption is declining, it’s not happening at the rate or volume that many advocates would like. In fact, recently, total beef consumption has been ticking up, approaching the record highs of the mid-2000s.

One solution we often talk about is intensifying meat production. But we’re also excited about changes coming from the direct-to-consumer market: innovative food products. Companies like Impossible Foods, Memphis Meats, Beyond Meat, JUST, and others are working on substitutes that look, taste, and feel like the real thing. By isolating the heme-containing protein from soy plants, Impossible was able to create a burger with the bleed and juiciness you’d expect from a cow. And we’re already seeing their “beef” increase in availability and decrease in price: this month, Burger King announced the Impossible Whopper, and it’s getting good reviews.

In our energy program, we argue that making clean energy cheap is far more effective than making dirty energy expensive. We think the same applies in food and agriculture: innovative technologies, like heme-based burgers, could turn out to be more disruptive than putting a price on agricultural pollution or restricting people’s choices. But one question remains: are these new burgers — in this case, Impossible Foods’ 2.0 patty — tasty enough to dethrone beef? While our impressions of the original version were mixed at best, many of us found that the 2.0 made great leaps in quality. As we continue to keep a close eye on our expanding protein options, we hope to see continual improvements — ones big enough that we’re compelled to pick the greener choice again and again out of genuine appetite rather than guilt. 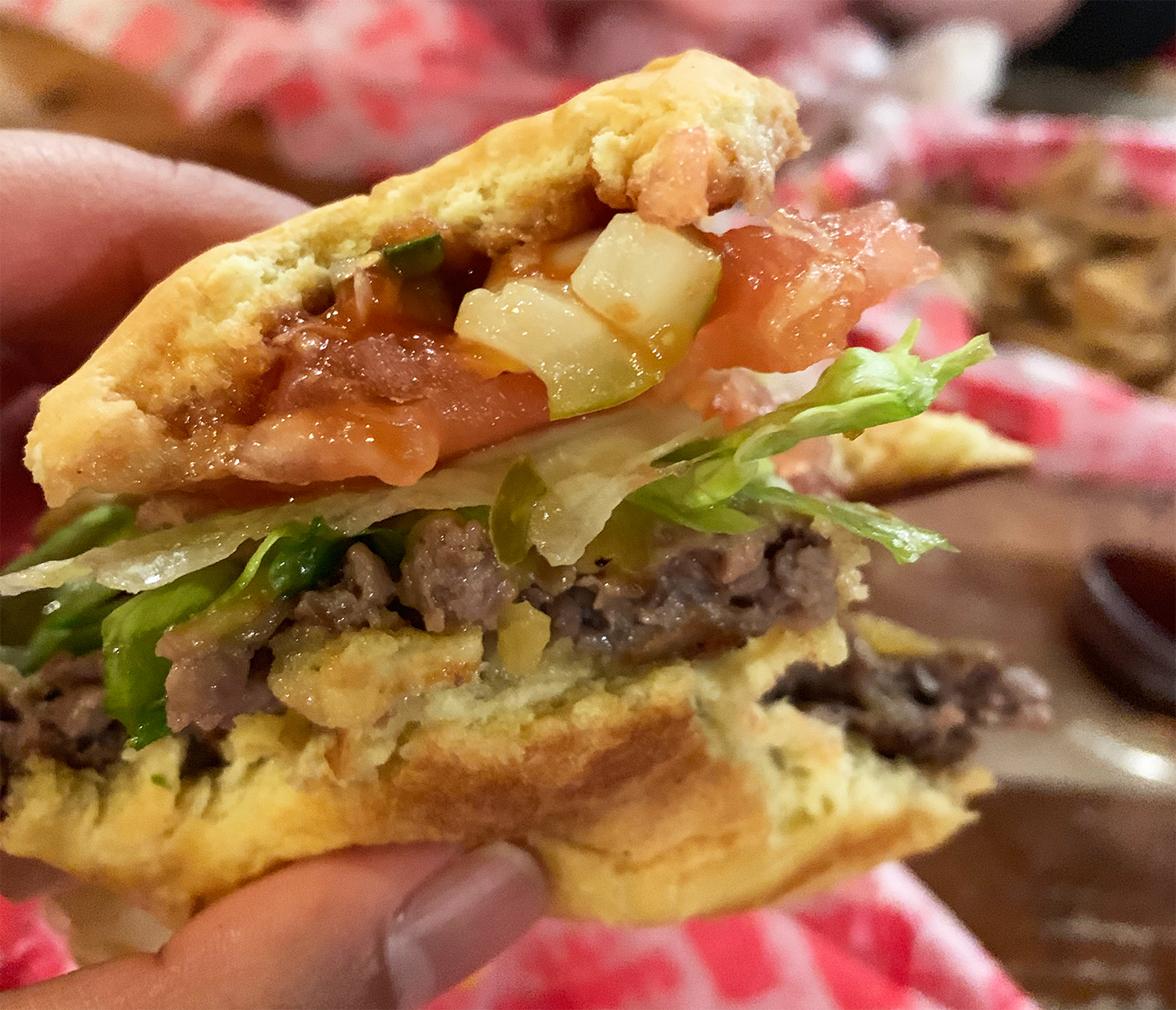 All ratings out of 5.

Alex: I probably had the original Impossible Burger four or five times, and I came to appreciate it for what it was: the best plant-based patty I’d ever had, but still different from cow. The new burger narrows that difference down to a pretty minute level. The consistency of 2.0 is near perfect, and it lost the distinct, slightly off-putting pungency of the original. I remain extremely excited for in-vitro meat, but if we can do this with plants, the future looks bright. Rating: 4.5

Kenton: Having never tried Impossible Burger’s 1.0 product, I can’t speak to the degree of improvement over its predecessor, but I’ll say this: I’ve been told that the best way to think about their first product is “far and away the best veggie burger you’ve ever had”; if this was indeed the right comparison, it’s not anymore. It’s both good on its own terms and a good enough replica to be disorienting. What I ate in our visit to their headquarters would take concentration to distinguish from beef, most especially in the context of any dish with reasonably bold flavors — which is to say, how you’d actually eat it. Color me impressed. Rating: 4

Jameson: The Impossible Burger 2.0 was even meatier than the 1.0 — it had a smoky taste, like a grilled burger, and not as much of a vegetable taste like most veggie burgers. It would work very well as either a thicker, restaurant-style burger or a thinner, fast-food style burger. I’m impressed over Impossible’s commitment to push the limits for plant-based meats. But it’s hard - some might even say Impossible - to make a veggie burger have the intensity and complex taste of a real burger, which keeps this from being completely indistinguishable from beef. Rating: 4

Jamie: The Impossible 2.0 Burger won’t replace my go-to veggie burger anytime soon. While it could easily pass as a normal beef burger — it checks off all the basics, like texture, fat, and flavor, and even has a rich soy umami flavor that might make it more appealing to meat-eaters — I wouldn't choose it over most veggie burgers, primarily because I'm a vegetarian and prefer the taste of veggies over meat. If you crave beef, however, choose Impossible; you can hardly tell the difference and the environment will thank you. Rating: 4.5 as meat, 3.5 as a veggie burger

Dan: The texture and mouthfeel are impressively similar to the thin beef patties you'd find at many burger chains. Yet given all the hype surrounding the burger and the higher-end atmosphere of Umami Burger (where I sampled the new 2.0 “meat”), I was surprised by its muted flavor. With Umami's truffle burger toppings, it ultimately made for a solid lunch, but I think the patty itself would fit best at a fast-food or fast-casual chain. Rating: 3.5

Tali: One of the key ingredients in Impossible Burger 1.0 was wheat protein, so as someone with many food allergies, I was pretty excited to get to try the gluten-free 2.0. If the burger had been served to me without context, I probably would not have guessed that it wasn’t real meat: the bloody-looking interior looks just like a medium-well burger, the savory umami brought me back for more and more bites, and the substantial texture kept me full for hours. This burger is a convincing meat imposter. However, since I knew that it wasn’t the real thing, I found clues I didn’t love, like the fatty aftertaste and the slightly overdone chewiness. As a mostly-vegetarian, I would probably stick with vegetarian meals and the occasional real burger, but if you crave meat often, Impossible is the way to go. Rating: 4

Ted: I rated the original Impossible burger 5/5 for a veggie burger, 2/5 for a hamburger. Not great, but better than some cafeteria burgers I've had. Impossible 2.0 is definitely a significant improvement. The texture is much better and it holds together better too. The original actually better approximated the greasiness of a good burger, but it was almost too much. The current version eats a bit leaner. Still a phenomenally good veggie burger. I give it a 3/5 for a burger. But the killer app for me was to take some of the meat Impossible sent me home with and blend it 50/50 with grass-fed ground beef from my local butcher. That was indistinguishable from a very good hamburger, with half the beef. That I would give a 5/5.

Alyssa: At this price point, I'm expecting more. Devout carnivores will know it's not up to snuff — no matter how much spice, sauce, or soy leghemoglobin you smother it in. The texture's alright but there's a strange nutty aftertaste that I'd be more than happy to forgive if this was marketed as what it is — an upscale veggie burger. I'd try it again to make sure I didn't miss anything, but I'll have to wait until my next payday. Rating: 1.5

Grace: The latest iteration of the Impossible Burger was good, but not yet totally impossible. It looked and tasted like an ordinary fast food burger. However, in some of the bites you could taste some plant fibers that had soy or mushroom-like textures, which gave away that it's not real meat. Rating: 3.5

Fran: Unfortunately, the Impossible Burger didn't quite hit the mark for me. The taste was pretty bland, the texture was a bit clumpy, and the meal was really only saved by the excellent sauce that the restaurant (Umami Burger) served with the patty. To be fair, I am not a vegetarian and am not familiar with other veggie burgers, so perhaps this is a big improvement over those other options. In any case, I wouldn't plan to choose this over a regular meat burger. Rating: 1

Our thoughts on Impossible Burger 1.0.

David Kay of Memphis Meats speaking at the Breakthrough Dialogue.

The Future of Meat.