First Taste of the Meatless "Burger that Bleeds"

On an otherwise ordinary fall Monday, the staff of Breakthrough Institute did the impossible. Impossible Burger, that is.

The Silicon Valley startup Impossible Foods has started a limited release of its Impossible Burger, the meatless burger that "bleeds," at select restaurants in New York, L.A., and San Francisco. One hundred percent plant-based with ingredients including wheat, soy, and coconut oil, the Impossible Burger’s “magic ingredient” that gives it its unique meat-like quality is a protein molecule called “heme.” Heme is especially abundant in animal muscle and “is what makes meat smell, sizzle, bleed, and taste gloriously meaty,” but the team at Impossible Foods was able to extract and ferment it from plant ingredients.

As a forward-looking, pro-technology think tank, Breakthrough is interested in ways that technology can decouple economic goods from environmental impacts. A lot of people (including many of the Breakthrough team) love eating meat, but also recognize that producing meat—especially beef—creates a large environmental footprint in terms of land and water use, greenhouse gas emissions, and local pollution. Can we harness cutting-edge food technologies to create such a close facsimile to a burger that true meat lovers can’t tell the difference?

That’s the mission Impossible Foods set itself with this burger, and we went to see for ourselves. 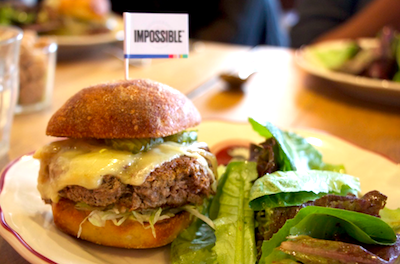 Cockscomb restaurant in San Francisco is one of two Bay Area restaurants now offering the Impossible Burger. They serve it on their lunch menu topped with Gruyere cheese, pickles, caramelized onions, and Dijon mustard and accompanied by a small green salad. It costs $19.

There was a range of opinion in our group, but the consensus seems to be “best veggie burger I’ve ever had, but not the same as a meat burger.”

The outward appearance of the Impossible Burger is remarkably close to a meat burger. It is pink in the middle and browned on the edges. The mouthfeel and texture are quite close to a meat burger, and it is surprisingly greasy and juicy. However, the patty is softer than a meat burger and falls apart pretty easily (it slides out of the sides of the bun as you bite down).

I thought the flavor of the burger itself was definitely blander than meat. With a burger, the meat is the main event, so a lackluster patty is not ideal. I think in a different preparation, like chili or tacos, I wouldn’t have been able to tell the difference nearly as much, since the meat would be more heavily seasoned and not the main ingredient. I see a lot of potential for using the Impossible Burger meat in those types of preparations.

I felt quite satisfied and full after eating it, and not slightly ill the way I often feel after devouring an entire pub-style burger. I would be happy to eat an Impossible Burger again, although I can’t say I’d always choose it over the real meat version if given the choice. I would love to try tacos or a bolognese sauce made with the Impossible Burger meat—I think I would enjoy those even more and miss real meat even less. One other melioristic option could be a burger that is half beef for flavor, half Impossible Burger meat for footprint.

Innovations like the Impossible Burger could help move fake meat from the lonely end of the freezer aisle into the mainstream. Cost is still a barrier to this transition (a $19 burger is definitely a splurge). But if fake meat or cultured meat can become as tasty and cheap as the real thing, it could have a huge effect on the global environment. Technological substitutes are an important way that humans spare nature, as outlined in the Breakthrough report Nature Unbound.

Read more reactions to the Impossible Burger from the rest of the Breakthrough team (I asked them to rate it 1-5, where 5 is the best):

Ted Nordaus, Executive Director: A very good veggie burger. A mediocre hamburger. The meat-like fibers were more like very long cooked shredded beef than hamburger. Had a really good fat/grease feel, like a burger but the patty fell apart as you ate it and it didn’t have that beef tallow aroma that a good burger has. A promising effort. It still needs work. But already better than the actual burger at the Daniel Patterson/Roy Choi LocoL healthy fast food chain. Rating: 5 for a veggie burger, 2 for a hamburger.

Emma Brush, Staff Writer: The Impossible Burger experience gets a 4 from me. Much anticipation, much digestion, and some decent “meat” in the middle. As with most burgers, the first bite was gloriously greasy and flavorful, and I would now enjoy nothing more than a nap.

Alex Trembath, Communications Director: What surprised me is that the texture and mouthfeel felt closest to an actual beef burger, while the taste and the aroma were more distinct. Cockscomb’s Impossible Burger would benefit from a crisp tomato slice, a sharper cheese, and a nice sauce. But if I encountered this Impossible beef in a bolognese sauce or a taco, I don’t think I would notice it’s not real meat. Rating: 3.5.

Michael Goff, Energy Analyst: The texture was good, taste was OK, aroma was off-putting, and appearance was in the uncanny valley. Rating: 3.

Joanna Calabrese, Office Manager: Prepare to be tricked by the texture into the true belief that this is actually beef. Miraculously juicy, savory, and mildly flavored, the "meat" itself stands alone as a noteworthy feat, but Cockscomb's take on it was less than so. The full burger package was largely mushy in texture and could use a more creative condiments combination than the classic melted cheese and grilled onions. Rating: 3.

James McNamara, Conservation Analyst: I was impressed with the rich, savoury flavour. The colour and texture were similar to ground beef, although the burger itself crumbled more easily than a beef burger normally would. My one criticism would actually be that it was almost too greasy, which all things considered is a pretty impressive feat for a plant-based burger! I’d give it a 3.5 overall, but on the scale of a veggie burger, I'd give it 5.

Hafeezah Abdullah, Events and Development Manager: Hands down the best veggie burger I've ever had. Would have been even better if it came with french fries and chipotle mayo. Totally would eat it again. Rating: 3.5 overall, but 5 for a veggie burger.

Grace Emery, Production Manager: I’d give the burger 2.5, but I think the patty could have potential for a 3 or 3.5 with the right adjustments. It could use some more spices to “beef” up the mild mushroomy flavor. It had the same texture and color as a rare, melt-in-your-mouth beef patty but the taste didn’t match up. Paired with a toasted brioche bun (soft enough not to smash the delicate patty, but toasted so it stands up to the juiciness), some fresh onion or lettuce for a crunch, and an aioli, this burger would have been more convincing and enjoyable to eat. I’m looking forward to the "Impossidog" (impossible hot dog) next.

Whitney Caruso, Director, Third Plateau: While the burger was intriguing at first, talk of the rubbery texture, pungent smell, and grease began to take over my senses. After a few bites of crumbling rubbery grease, I put it down and went for my salad instead. Rating: 1.5.

Mike Berkowitz, Principal, Third Plateau: The Impossible Burger didn't quite do the impossible. The best part about the burger is the way in which it really, truly looks and acts like ground beef. But that's about where the comparison ends. What I most missed in this experience was something that smelled like a hamburger and that had the depth of flavor that a burger does. The Impossible Burger had no discernible smell and its flavor was a bit dulled - though it certainly approximates the flavor of beef better than any veggie burger I've ever had. It was fun to try though, and I can always say that I ate modern technology. Rating: 2.5.