Indoor Ag Might Use More Energy to Use Less Land, Fertilizer, and Pesticide

Many environmental writers and experts, such as Stan Cox, Lloyd Alter, and Michael Hamm, dismiss vertical and other fully indoor farms as being overly energy intensive. These farms rely on artificial lighting, heating and cooling systems, and vertical stacking of crops to dramatically raise crop productivity. Their critics are right in one respect: high energy use is an unavoidable downside of vertical farms.

But focusing exclusively on the energy use of indoor farms misses the larger picture. Although indoor farms may not be able to grow staple crops like corn and rice (more on that in a future post), they could play a critical role in reducing land, fertilizer, water, and pesticide use for greens, vine crops, herbs, and other high-value crops. For example, indoor strawberry production can eliminate the use of highly toxic soil fumigants that growers conventionally use. Growing lettuce indoors can dramatically cut water use, an important issue in drought-prone California where the majority of US lettuce is produced.

Even less appreciated is the fact that indoor farms, at least ones growing lettuce and greens, can have relatively low carbon emissions. As the chart below illustrates, outdoor production of these crops already has low emissions. When accounting for food loss, transport, land use, and the increasing development of clean energy generation, emissions from indoor production can rival those of outdoor farms.

Crops that can be grown indoors have relatively low GHG emissions 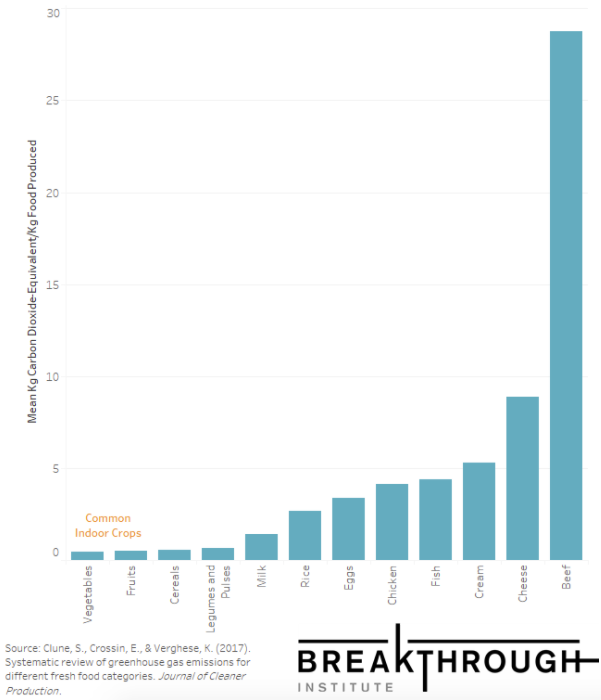 Why do emissions from vertical farms matter? One of the important agricultural trends in 2018 will likely be the scaling up of indoor vertical farms. The San Francisco-based start-up Plenty recently received $200 million in investments and is set to start selling its lettuce and greens in several cities later this year. AeroFarms, another vertical farm company, acquired $40 million in financing and is expanding into the Middle East. Overall, indoor farms plan to expand dramatically — nearly 60-fold in the next five years.1

In 2016, Washington Post columnist Tamar Haspel gathered data from indoor farming experts and estimated that, at best, vertical farms could generate about 7 to 20 times more greenhouse gas emissions in producing lettuce than an outdoor lettuce operation. But these estimates are for places with relatively high-carbon electricity production, and do not account for all of the characteristics of vertical and other indoor farms that can reduce emissions. With different, yet realistic assumptions about food waste, electricity generation, transport, and land use, the carbon footprint of vertical farms is much closer to that of outdoor farms, and potentially smaller in some circumstances.

Most comparisons of greenhouse gas emissions from vertical and outdoor farming focus only on energy use and emissions directly from the farms. Outdoor farming requires electricity and fossil fuels for the manufacturing and operation of machinery, production, and application of pesticides and fertilizers, irrigation, and more. Academic estimates suggest that lettuce production requires about two calories of energy input for every calorie produced.2 In addition, fertilizer and manure application releases potent greenhouse gases. Despite this seemingly high rate of energy use and other emissions, the typical head of lettuce emits no more than 1–3 kilograms of carbon dioxide equivalent (a measure of global warming potential) per kilogram of lettuce.3

The reliance of vertical farming on artificial lighting, heating, and cooling makes its direct energy use several times higher than that of outdoor farming. Louis Albright, professor of agricultural engineering at Cornell University, estimates that in New York the electricity used to light each kilogram of indoor lettuce emits about four kilograms of carbon dioxide. Adding in electricity for heating and cooling can increase these emissions by as much as 2x.4 These emissions can be much lower when the carbon intensity of electricity is lower, but nevertheless are the primary source of emissions in most cases. Emissions from fertilizer manufacturing and application, a large source of emissions on outdoor farms, are cut in indoor farms, some of which claim to use half the fertilizer normally applied or even less.5

Any indoor farm that relies on artificial lighting will have larger on-farm energy use and emissions. Dr. Neil Mattson, co-director of Controlled Environment Agriculture at Cornell, agrees, writing, “In terms of energy the vertical/indoor farm often has a 2–3 times higher carbon footprint than greenhouse production. ... I believe if one were to do a comprehensive carbon footprint analysis for indoor farms that they would be substantially higher than both greenhouses and field production.”

Still, this gap between outdoor production and indoor production with 100% artificial lighting is not as large as it seems and can be further closed. With different levels of emissions from electricity production, efficiency improvements in lighting, reduced emissions from transport, and changes in food waste and land use, vertical farming of lettuce can have nearly the same carbon footprint as outdoor lettuce.

Vertical farms in places with low-carbon electricity production, such as California, France, and Norway, can have net emissions close to those of outdoor farms. Most estimates of greenhouse gas emissions from indoor farms assume that electricity is produced with a relatively high amount of carbon emissions (e.g., 460 grams CO2e/kWh). However, electricity has about half this carbon intensity in California, for example, and nearly one-tenth that in Sweden or Norway.

Additionally, there is room to further improve the efficiency of lighting and reduce electricity needs, perhaps by as much as 40%. A vertical farm in Japan, for instance, has found ways to reduce its power consumption by 30%.

Locating lettuce production near urban centers can reduce emissions from transporting lettuce hundreds or thousands of miles by a surprising amount. Contrary to popular opinion, transport from producers to retailers usually is responsible for no more than 5% of GHG emissions of total crop production in the US. However, it can account for 20% or more of lettuce emissions given its low weight, low on-farm emissions, and the long distance that outdoor-grown lettuce must travel from California to distribution centers to retailers.7

Additionally, emissions from transport are substantially larger when food must be flown in through air freight. In the US, this is most common with meat and fish, but occurs too with herbs, flowers, and other perishable plants. The US imported nearly $2 billion worth of these in 2015. Such imports are also more common in some parts of the world than others. For example, Singapore imports 93% of its food. Overall, the effect of indoor production on emissions from transport varies widely by crop and location, but can yield real climate benefits.

Another claim vertical farm boosters make is that they can deliver produce to retailers and customers fresher than other growers, thereby reducing spoilage. Reducing food waste at home, where most of it occurs, may be very challenging. Although over 25% of lettuce and other fresh vegetables that consumers buy go uneaten, consumer behavior is difficult to change.

However, there are opportunities to cut waste elsewhere in the food chain. For example, NRDC reports that 10–20% of lettuce in supermarkets is discarded. More importantly, crop losses on the farm can be cut. Outdoor farm production is highly dependent on suitable conditions. For example, drought in California reduced lettuce production by as much as 15%, and flooding in 2016–17 caused a nationwide lettuce shortage. NRDC estimates that as much as 17% of lettuce and salad greens are regularly lost during production due to weather, pests, and other factors. In addition, as much as 20% is discarded after harvest due to imperfections or because it does not meet market standards. 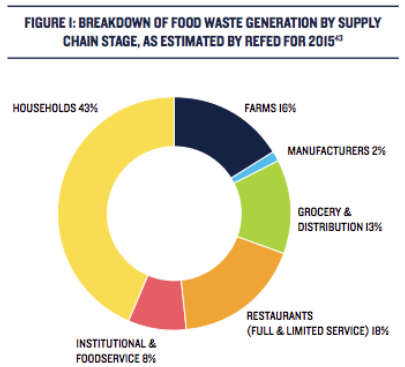 Indoor farming can eliminate many of these losses. Growing in a climate-controlled environment can not only reduce weather-related losses, but can also result in more uniform produce that meets retail standards. Freight Farms, for example, found that growers using their vertical farming systems disposed only 7% of their lettuce as non-marketable, less than half that of the average farmer. Other companies claim that the close proximity of vertical farm production to customers and retailers results in fresher produce and therefore smaller retail losses.

Although these claims may be exaggerated, there clearly are potential benefits. If crop losses from weather were eliminated, and losses from not meeting retail standards and from retail disposal halved, this would make vertical farms nearly 50% more productive than claimed,8 and shrink their carbon footprint compared to outdoor production.

Vertical and indoor farms can have fewer losses9

Although crops like lettuce are grown on only a fraction of US cropland, their land use is also important to consider when assessing the carbon footprint of vertical farms. Many indoor and vertical farms claim to use less than 1/100 of the land used by outdoor farms. Plenty, for example, claims it can grow the same amount of lettuce, herbs, and greens as an outdoor farm using 350 times less land. These claims are not the most transparent, may be exaggerated, and may incorporate estimates of reduced food waste. For instance, although AeroFarms claims it is 390 times more productive than traditional farms, its own numbers suggest it only produces 5.5 times more than the national average yields of outdoor leaf lettuce of 5.2 pounds per square foot.10 Nevertheless, it is clear that the best vertical farms produce at least several times more per square foot or acre, and perhaps much more, than outdoor farms.

To consider the impact on land, imagine a vertical farm growing lettuce over one acre of real estate on the periphery of a city. If the farm is 20 times more productive than conventional farms, it could displace up to 20 acres of farmland, sparing that land for other purposes. This area could be restored to the ecosystems that existed before they were plowed for farmland. In California, some might be restored to wetlands. Elsewhere, forests might be planted, or grasslands revived. Although idealistic-sounding, this restoration has occurred across much of the US and Europe. According to the Economist, since 1990, the portion of Spain’s land that is forested increased from 28% to 37%, partially due to abandonment of farmland.

Such restoration of forests and other lands offers one of the largest opportunities to reduce greenhouse gas emissions from the agriculture sector. The US recognized this when it committed to the Bonn Challenge, aiming to restore 37 million acres of forest by 2020. Each acre of US cropland that is reforested is estimated to sequester between 2.2 and 9.5 metric tons of CO2 per year.

Ultimately, it’s impossible for vertical farms to get around their energy-intensive lighting needs. Using sunlight, as greenhouses do, could help matters, but there is a limit to how much vertical production sunlight alone can sustain. Indoor production uses more energy, period.

Yet this is no reason to write off vertical farms as others have done. With high-efficiency lighting, low-carbon electricity, and large reductions in food waste and transport, they can even achieve a relatively low carbon footprint. For instance, in Sweden, where greenhouse gas emissions from electricity are a fraction of the US average,12 indoor lettuce farms may even have a smaller carbon footprint than outdoor ones. Additionally, urban indoor farms can use waste heat and other byproducts from nearby industrial facilities. Even when emissions are higher than in outdoor production, this additional impact may be offset by indoor farms’ environmental benefits.

Comparing the net emissions of outdoor and indoor lettuce production13

In short, vertical farms, though energy-intensive, can have low emissions and environmental impacts. As energy generation from solar, wind, nuclear, biogas, and other low-carbon sources grows and energy efficiency of lighting improves, emissions will only continue to shrink. The fact that the farms grow food indoors, under lights, and without soil in a seemingly “unnatural” way should not diminish their benefits. Rather, they highlight how energy-intensive, highly technological, and resource-efficient methods of farming are key to growing healthy food with minimal impact.