Eating Meatless Meat Is Safe for You and the Planet

The Impossible Burger—the meatless burger that bleeds—has recently been lambasted by some environmental activists for using genetic engineering to make the burger taste and look like meat. It’s a strange accusation, to say the least. The environmental impacts of meat production are large and complicated; reducing them will require modern tools and technologies. And few innovations have as large a potential as meatless meat to mitigate ecological impacts while meeting global demand.

In this post I’ll take a quick look at the significant environmental benefits of meatless meat we would forgo in a knee-jerk opposition to genetic engineering.

As a matter of first principles, the activists’ opposition to the burger appears unfounded. The Impossible Burger doesn’t contain any genetically engineered ingredients. Rather, one of the ingredients, heme, is produced by a genetically engineered yeast—similar to the way insulin is produced for people suffering from Type 1 diabetes. The company has also voluntarily gone through a rigorous food safety review with the Food and Drug Administration that many companies avoid and is conducting further food safety tests.

But more importantly, the activists’ opposition may obstruct progress on one of the world’s top environmental challenges—reducing the impact of meat production. As Breakthrough’s Ted Nordhaus observed in USA Today last week, this is another unfortunate example of environmentalist symbolism obstructing environmental progress.

Most hamburgers are made from ground beef. The Impossible Burger mostly contains coconut oil and protein from wheat and potato. Comparing the resources and pollution involved with each food, as I do below, demonstrates the potential for meat substitutes to benefit the planet.

Total US beef consumption is higher than in any other country. We eat nearly 25 billion pounds of ground beef and other beef products each year, equivalent in weight to about 50 skyscrapers. 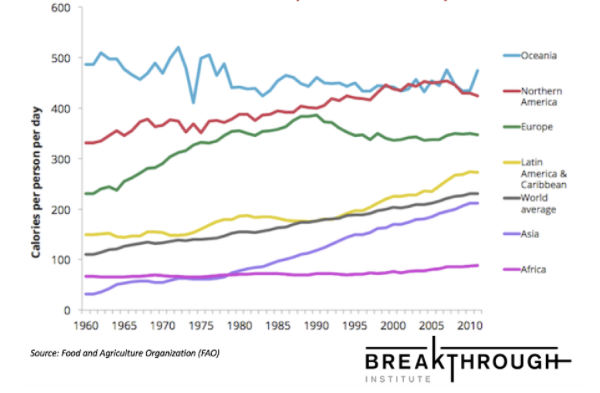 And beef has a disproportionately large environmental footprint. Pound for pound, it has a higher carbon, land, and water footprint than other widely consumed foods. For instance, pasture for cattle grazing takes up over 400 million acres in the US and covers a quarter of the world’s land area. Additionally, over one-third of US corn produced is used for animal feed, with millions of acres of corn farmland devoted to growing feed for beef cattle. Some of this land has replaced or is infringing on prairie, grassland, and wetland ecosystems.

Plant-based burgers and other meatless alternatives, like in vitro meat, promise the taste and experience of a beef burger with a far smaller environmental impact. Research has shown that producing an Impossible Burger requires one-quarter to one-tenth of the water use, greenhouse gas emissions, and land use compared to a typical beef-based burger. For instance, an Impossible Burger requires only a few square meters of cropland to grow the wheat, coconut, soy, and other ingredients involved. Other analyses of plant-based meats have found similar environmental benefits.

Plant-based burgers could become widely popular if companies can improve their taste and texture and bring prices down. About one-quarter of beef in the US is sold by restaurants and fast food chains as burgers and ground beef. Imagine if these chains replaced this beef with a 50:50 mix of beef and non-meat ingredients like Google does. Mixing them may get around the fact that plant-based burgers still don’t taste the same as beef burgers, and could substantially reduce beef demand.

How would this help the environment? Based on existing estimates, this replacement would reduce US agricultural greenhouse gas emissions by 24 to 58 million metric tons CO2 equivalent, or by 4.6 to 11.1 percent. Although not a huge percentage, it would be meaningful change—the equivalent of taking 5 to 12 million cars off the road. Just as importantly, it could reduce total land use by 22 million acres, freeing up land for people and animals to enjoy.

With doctors, researchers, and even celebrities calling for people to eat less meat—but rates of pure vegetarianism or veganism stubbornly low—the Impossible Burger and other plant-based burgers seem like a win for people and a win for the planet. There is clearly an enormous potential for low-impact foods that taste like meat to satisfy Americans’ appetite and spare the environment. Are we willing to forgo these benefits because activists don’t approve of the genetic engineering technology used to make one ingredient?