Clean energy innovation and decarbonization efforts will be overwhelmingly concentrated in rapidly industrializing countries, where demand for energy is high and deployment opportunities are broad, says a new report from a group of 12 energy scholars.

Nearly all of the growth in energy markets and the majority of new energy technologies deployed in the next several decades is projected to occur in the developing world.

“It is [in non-OECD countries] that we should expect to see – and should work hardest to accelerate – energy innovation,” write the authors. 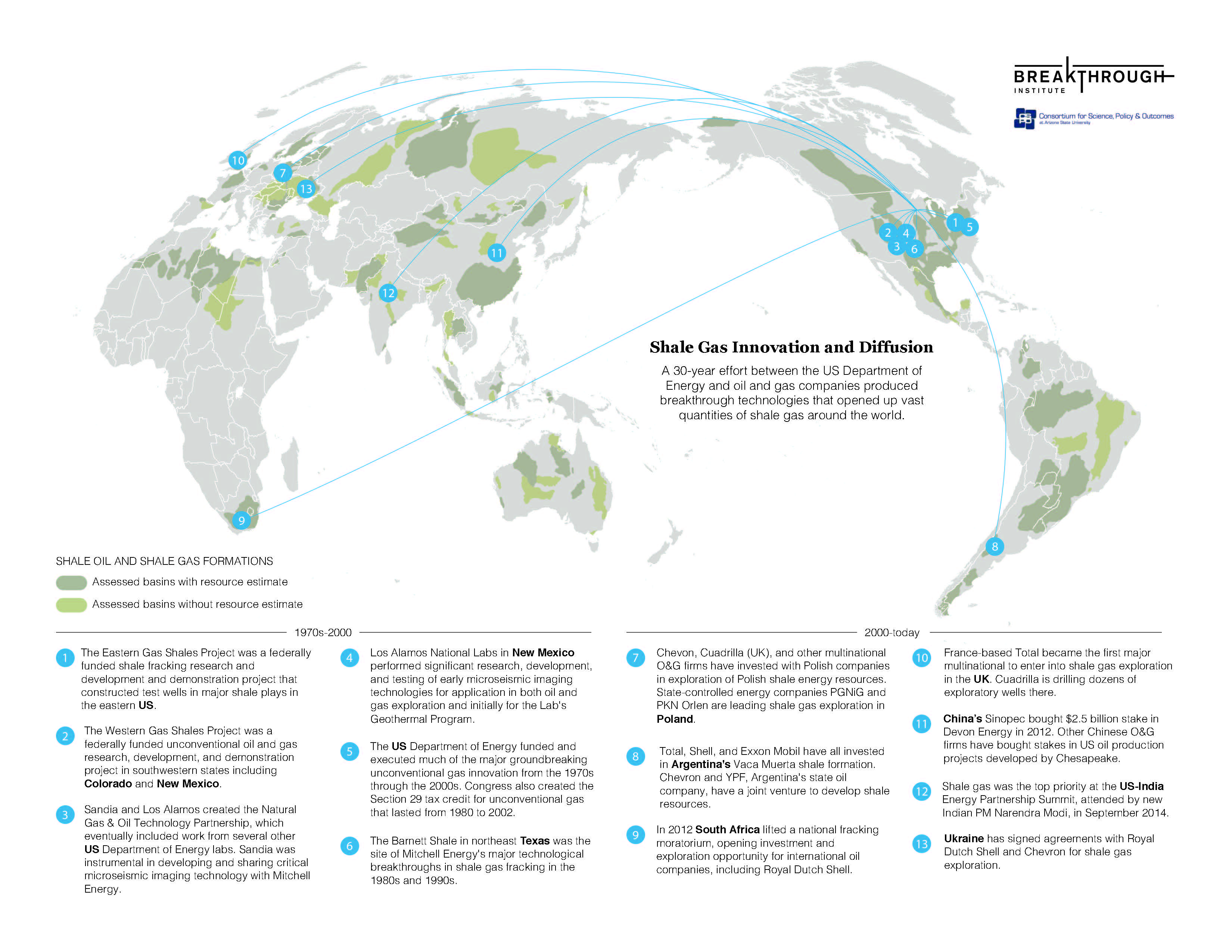 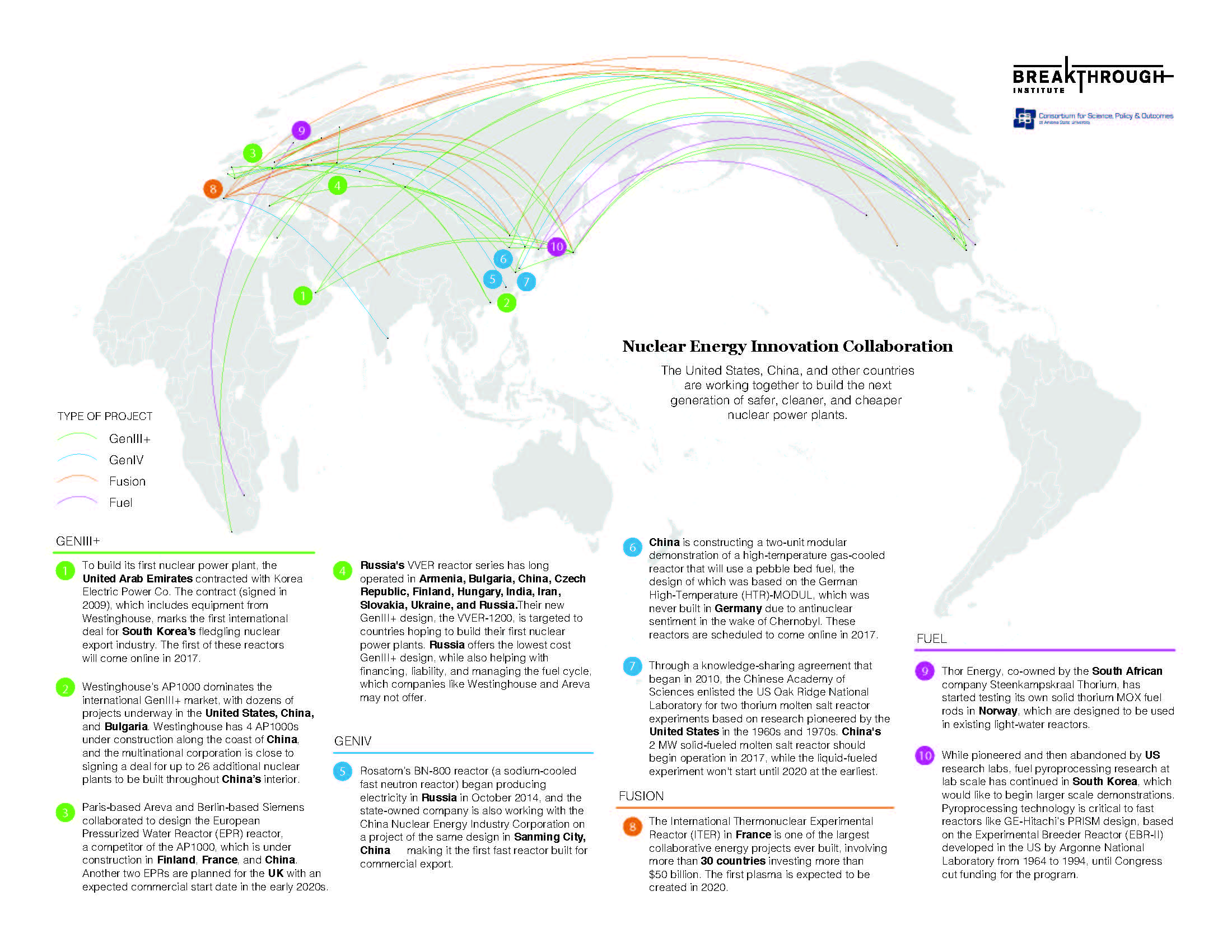 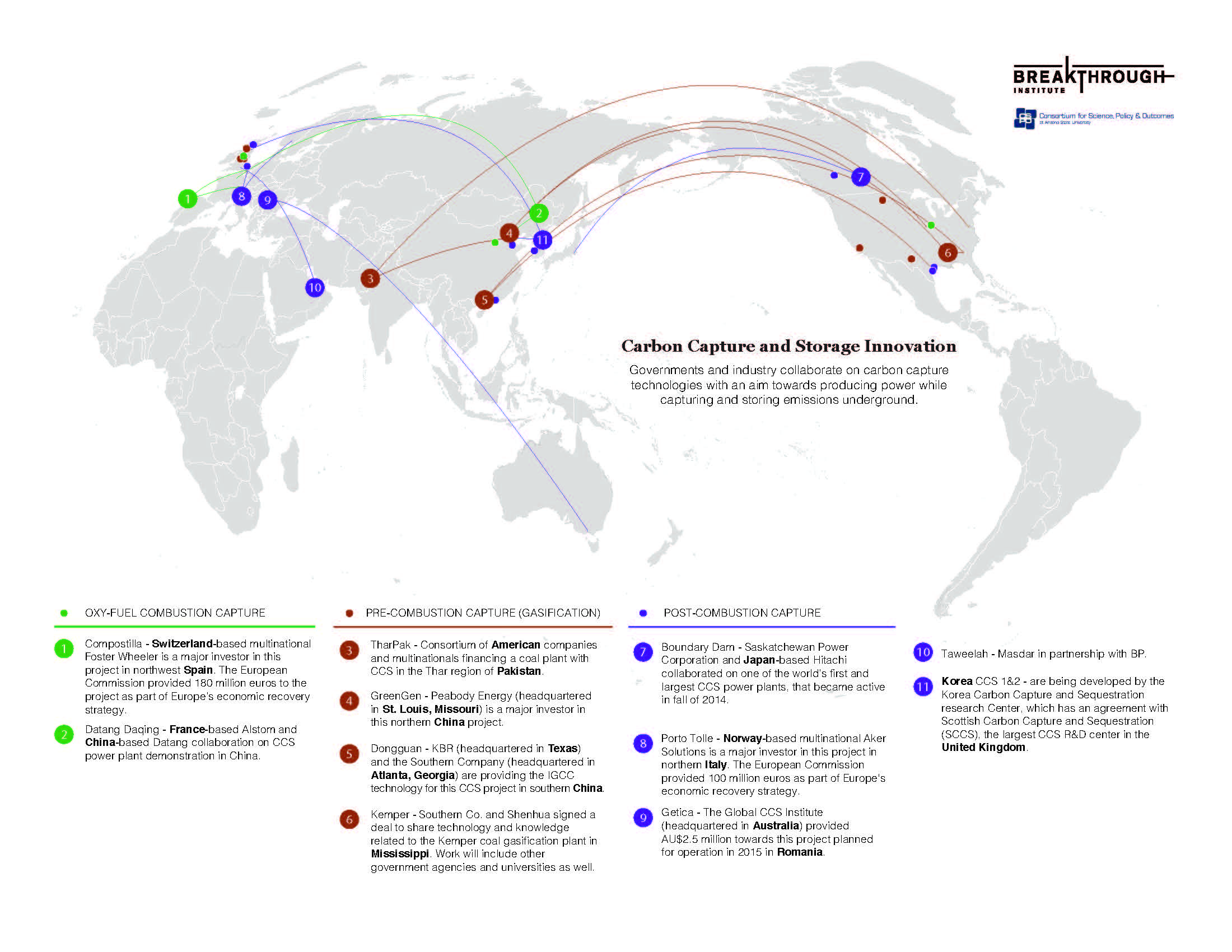 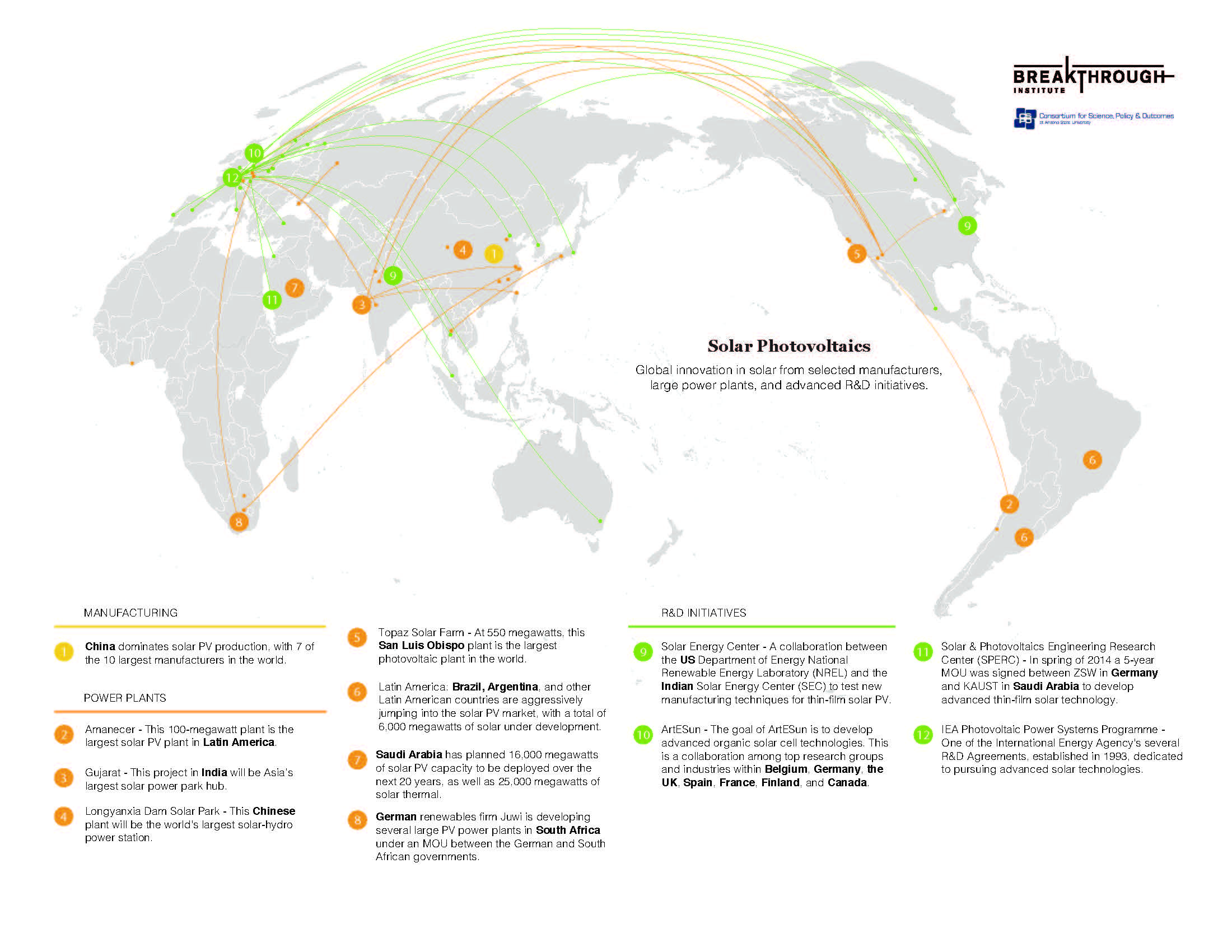 The maps illustrate just how firmly industrializing countries are leading the way on energy innovation: China and Russia are spearheading the deployment of advanced nuclear power. Argentina and South Africa are partnering with US firm to recreate the US shale revolution. China leads the upstream markets for solar, and Western countries are seeking emerging markets to deploy novel carbon capture technologies.

Nations are not motivated to innovate toward clean energy technologies by global treaties or binding commitments, the report contends. For the past 200 years, more pragmatic concerns like national security, economic development, and things like air pollution are what have motivated governments and firms to move their nations up the energy ladder.

For instance, while the November 2014 announcement of the climate agreement between the United States and China was widely celebrated, the breakthrough “was more diplomatic than practical,” says coauthor Alex Trembath. What the agreement did signify, says Trembath, was that climate progress will likely be made among select global leaders, “not by agreement among 200 countries with drastically different goals, economies, and demographics.”

The technology ambitions of the US-China agreement, however, do support the thesis of High-Energy Innovation – that energy innovation in the 21st century is likely to occur across borders and within the context of rapidly growing energy demand in industrializing countries.

While US President Barack Obama and Chinese President Xi Jinping were ironing out the details of their climate agreement, less publicized were the partnerships and massive investments made to strengthen energy infrastructure and industry. Russia and China recently agreed to a $400 billion natural gas pact that will lessen Russia’s reliance on Europe. Meanwhile, South Africa just signed a cooperation accord with China with the goal of procuring more nuclear power plants.

The international energy innovation model stands in contrast to the “sustainable development” framework envisioned in the 1960s and 1970s and persisting today through the United Nation’s Framework Convention on Climate Change, the report argues. Poor countries are unlikely to grow their economies at significantly lower energy levels, according to the authors, and low-carbon energy systems will not come about through “technology transfer” of Western-deemed “appropriate technologies.”

High-Energy Innovation is the second in a trio of reports on climate pragmatism, the first of which, Our High-Energy Planet, was published earlier this year.

In the coming decades, most of the innovation in clean energy technologies needed to combat climate change will likely occur in rapidly industrializing rather than developed nations. This report identifies and maps promising international efforts by private firms and governments in China, India, the United States, Europe, Latin America, and Africa to advance four low-carbon technologies –– shale gas, nuclear, carbon capture and storage (CCS), and solar –– and makes the case for more collaborations between nations.

Technological innovation often occurs where demand is rising the fastest. Wealthy developed nations have seen their overall energy consumption growth slow down in recent decades, along with the rates of economic growth. By contrast, energy consumption in poor and developing (non-OECD) countries is expected to increase 90 percent by midcentury. The so-called “BRICS” — Brazil, Russia, India, Mexico, China, and South Africa — spend more on energy innovation (i.e., research, development, and deployment) than all 29 OECD member nations of the International Energy Agency (IEA).

Today’s global energy innovation bears little resemblance to the 1980s-era model of “technology transfer” from rich to poor nations, as enshrined in the United Nations Framework Convention on Climate Change. Industrializing nations have in recent years pioneered innovation of next-generation energy technologies, and are beginning to market those technologies internationally. South Korea, for example, which has seen the cost of building standardized nuclear plants decline over time, is constructing advanced nuclear power plants in the United Arab Emirates for both electricity and desalination.

While emerging economies will do the heavy lifting, advanced industrial economies still play important roles. Germany, the global leader in solar deployment, is developing large solar power plants in South Africa and India. US energy utilities are working with Chinese firms to demonstrate carbon capture and storage technologies in Mississippi. Shale fracking technologies developed in the United States are being deployed with the help of US firms and public research agencies in China, which has a more complicated geology and requires significant innovation to become commercially viable.

Policy makers ought to view energy innovation as a global public good. The benefits of creating cheaper and cleaner energy sources are shared by all –– not monopolized by individual nations. For instance, the success of nuclear and shale gas in China depend largely on the successful development of similar technologies in the United States. Similarly, the United States may likely benefit from cheaper and safer nuclear, solar, or CCS developed in China. The broader picture is one of shared economic and environmental interests from creating cheap and clean energy.

Governments, industry associations, and philanthropies all have important roles to play in coordinating and contributing to accelerated low-carbon technology innovation within and among nations. While philanthropies have funded major international efforts to increase agricultural yields and improve public health, no such initiative yet exists on energy innovation. Policy makers, for their part, should seek to expand these promising initiatives for both economic and environmental reasons. Such an approach is more likely to succeed than efforts that require shared sacrifice. Governments have long encouraged and invested in technological change to access to cheaper, cleaner forms of energy for economic growth, national security, and environmental quality.

Dan Sarewitz is Co-Director, Consortium for Science, Policy & Outcomes, and Professor of Science and Society at Arizona State University.