A Response to Breakthrough’s Essay on Meat Production

This response was originally published at Jayson Lusk’s blog and is cross-posted here with permission.

Marian Swain, after discussing some of the environmental challenges with meat production, is able to see through all the popular prognostications to get to the heart of the problem:

“conversations about mitigating this impact have focused on two strategies: convincing people to eat lower on the food chain and shifting meat production toward more extensive systems. But a growing body of evidence suggests that the former may not prove particularly practical, while the latter may not always bring about better environmental outcomes, particularly at global scales.”

Advocates of "convincing people to eat less meat" are right in one sense. Eating meat isn't necessary. Many people can live a perfectly healthy life without needing to eat meat. We also don't need to drive cars, use electric light bulbs, type on our laptops, or have children. But, we are immensely better off having these things in our lives. The trick is to consume the things we want while trying to be responsible about it. Swain, however, turns the table on perceptions of "responsible" by noting that intensive forms of production often come at a lower environmental cost than the extensive forms (e.g., free range, grass fed, etc.) so often favored by environmentalists.

Swain documents the trends in consumption of meat products in different parts of the world over time. When thinking about environmental outcomes, however, it is useful to focus on the number of animals rather than just the number of pounds or kilograms consumed. The reason is that environmental impacts are more correlated with numbers of animals than numbers of pounds, and when it comes to animal welfare, animal well-being is experienced one brain at a time.

As the graph below shows, we now have many fewer cows in the U.S. than we once did (for a broader discussion, see this article I wrote for the journal Animal Frontiers) 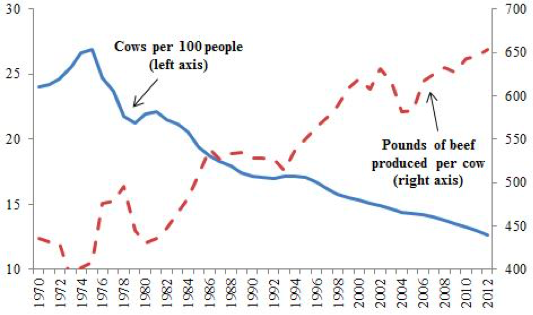 The figure reports the ratio of the total beef production in a given year to the inventory of all cows and heifers (2 years old and older) for the same year. The change is dramatic. For each cow and heifer in the US, in 2012 an additional 217 lbs of beef was produced as compared with 1970 (a 50% increase). Meanwhile, the number of cows per capita has fallen by about 47%. Remarkably, 4.4 billion more pounds of beef were produced in 2012 than in 1970 despite the fact that there are now 9.5 million fewer cows and heifers. In a New York Times article, I pointed out that we would need 15.3 million more cows (not counting the additional heifers, stockers, and feedlot cattle) to produce the amount of beef Americans actually ate in 2015 if we were instead using 1950s technology. For dairy, we'd need another 30 million cows to produce the amount of dairy products we enjoyed in 2015 if we were instead getting only 1950s yields. The dramatic increase in productivity, brought about by changes in genetics, management, and other technologies, has given us more of want we want (meat and dairy) with fewer resource-using, methane emitting animals.

One of the concerns in all this is the impact on animal welfare. Yet, the tradeoffs are difficult. Beef cattle have higher land requirements, lower feed efficiency, and higher carbon-equivalent emissions than pork and poultry. Yet, a good case could be made that animal well-being is higher for beef cattle than for pork and poultry. (And no, it isn't the case that animal welfare is uniformly better or worse at small vs. large farms). A key challenge for the future is in identifying how to realize the gains in efficiency and reductions in resource use brought about by intensification without unduly sacrificing animal welfare or the price consumers pay for food. As I discussed in my latest book, Unnaturally Delicious, there are innovative housing systems and creative markets that are attempting achieve these compromises.

Swain mentions another solution: lab grown meat. As I discussed in Unnaturally Delicious, I'm a fan of this bovine-in-a-beaker approach. But it isn't a free lunch. Lab-grown cells have to eat something. And they produce waste. The high costs of producing lab grown meat suggests the process currently uses many more resources than old-fashioned animals, but advances in technology may one day reverse that equation. Whether people actually want to eat a lab grown burger is a different story and my surveys suggest the new burgers will face an uphill battle in terms of consumer acceptance. Time will tell.

Regardless of whether we get meat from a lab, from a cow, or from a chicken, it is important to recognize science and technology as a path to improve environmental outcomes and animal welfare. As I put in in a Wall Street Journal editorial on the subject:

“Let us also not gloss over what is beef’s most obvious benefit: Livestock take inedible grasses and untasty grains and convert them into a protein-packed food most humans love to eat. We may be able to reduce our impact on the environment by eating less meat, but we can also do the same by using science to make livestock more productive and environmentally friendly.”