Can We Grow More Food on Less Land?

Sustainable Intensification Needs to Continue For Trend to Last

Slash and burn agriculture. Palm oil plantations. Deforestation in the Amazon. The environmental news about the natural habitat being converted to agriculture has been pretty grim.

When you consider that we will need 70 percent more food by 2050 (assuming that we don’t make serious progress in reducing waste, slowing population growth, or halting the increase in consumption of animal products, FAO 2011) it’s hard to feel hopeful about the future. Without improving yields, that 70 percent increase in food would require over 34,000,000 km2 of new farmland and ranches to be created, an area larger than the entire continent of Africa (FAO 2014).

That’s why I was surprised to find what appears to be good news lurking in global data (from the U.N. Food and Agriculture Organization, FAO 2014) while I was doing research for a chapter in an upcoming book (Agricultural Resilience: Perspectives from Ecology and Economics – coming from Cambridge University Press later this year).

I found that, while the global food supply per person has increased over the last 15 years, we have simultaneously decreased the total amount of land we’re using to produce it.

Here’s why my finding could be read as good news:

It also means that the widespread assumption among many environmentalists that agriculture is just chewing up more and more habitat at a faster rate each year is simply not correct.

But the story isn’t all rosy, and there’s a lot of work left to do:

This is why The Nature Conservancy has been emphasizing the sustainable intensification of agriculture wherever possible. If we can’t produce more food on existing farms and ranches (while simultaneously reducing environmental inputs and impacts), we can expect that even more habitat will be cleared in the future. We also need to ensure that existing farmland capable of high yields with sustainable practices will keep being farmed, rather than converted to other uses (which could help drive more habitat loss).

The following figures show how much land is being used for agriculture around the world (row crops, ranches, and permanent crops like orchards and vineyards), and how much food is being produced in terms of calories per person. Note that 1 kilocalorie (kcal) is equivalent to 1 Calorie as reported on American nutrition labels, and that y-axis of the charts do not begin at 0 (to make it easy to see the relatively small changes in recent years). 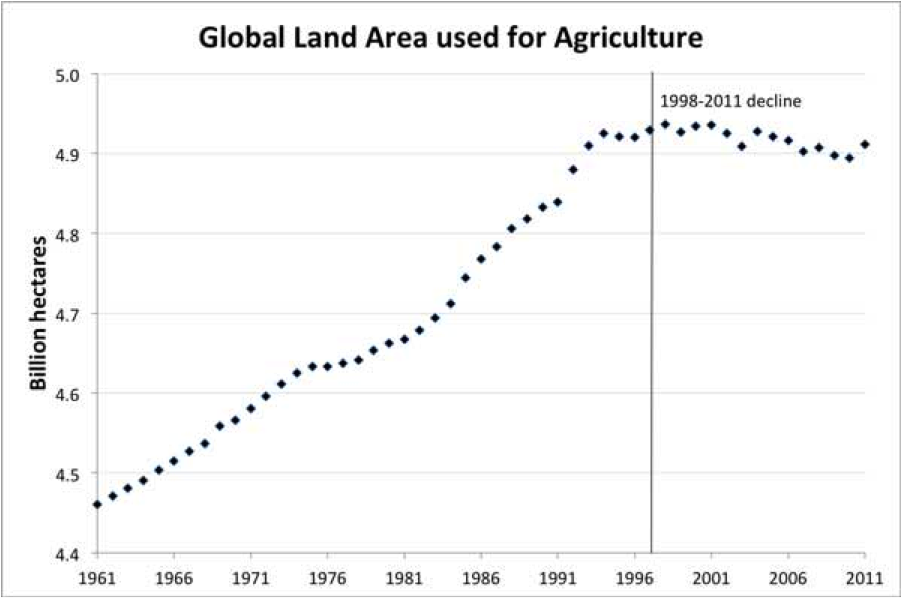 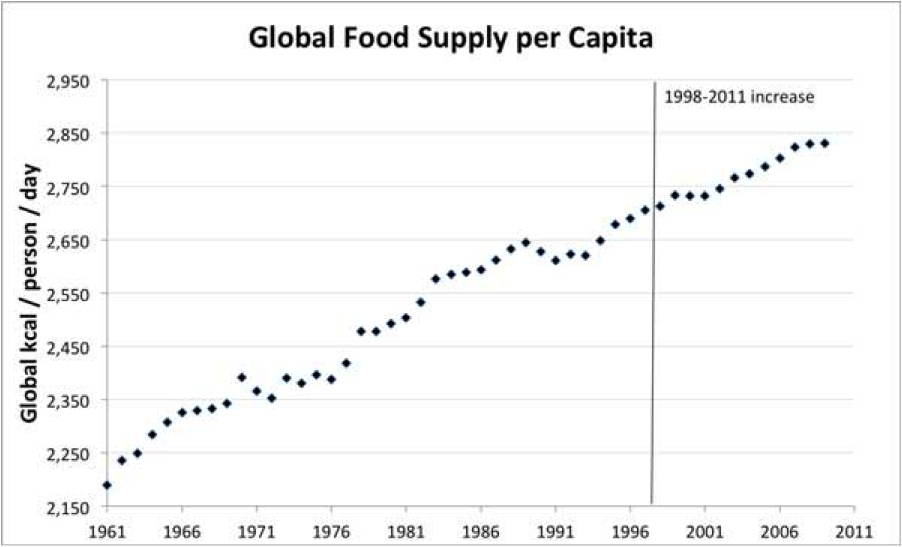 While agricultural expansion was pretty steady on a global scale for over 30 years, in 1995 we saw the first recorded decrease in agricultural land area. It peaked in 1998, and has been lower ever since. In fact, until 2011 (unfortunately the latest year this data is available from the FAO) it was continuing to decline slightly over time.

At the same time we have managed to produce more food on less land, and are keeping ahead of population growth (although that doesn’t mean we have addressed inequity in food distribution and nutrition).

From 1998 to 2009 (the latest year global food supply data is available from FAO) we saw a 4.4 percent increase in global calories produced per capita (from 2,713 kcal/capita/day to 2,831) while total agricultural land area dropped by 0.8 percent (although this may be too small a change in area for this data to reliably detect; see data disclaimers section below). About 32 percent of the increase came from animal products (mostly meat and milk), with another 27 percent from vegetable oil and 26 percent from fruits and vegetables.

What the Global Trend Doesn’t Tell Us

On the other hand, we don’t know whether this intensification was done sustainably or not. The increasing production is mostly in relatively resource-intensive foods rather than more efficient grains and legumes, and these data don’t tell us anything about how soil health and water quality may have been impacted by these changes.

More importantly, the fact that global agricultural area hasn’t increased doesn’t mean that there isn’t conversion of natural habitat for agriculture occurring. In some countries like the United States, for instance, conversion to agriculture is still occurring, but it is outpaced by conversion from agriculture (e.g. to urban development). In other words, good news on a national scale doesn’t mean we aren’t seeing problems locally.

This caveat is even more relevant when considering the global pattern. The decline of agricultural land in much of the world (e.g., New Zealand, Mongolia, and Poland) hides significant agricultural expansion elsewhere (like Vietnam, Indonesia, and Argentina), as shown below. 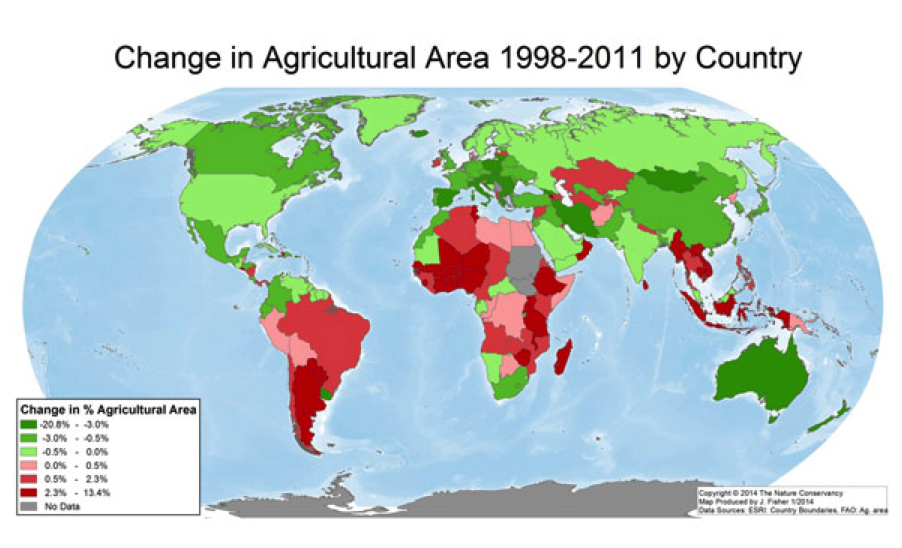 It shouldn’t be too surprising where most expansion is taking place; you have likely heard about palm oil in Indonesia and soy in South America. Also, as environmental regulations get tighter in developed nations it is possible that this provides an incentive for agriculture to shift to developing nations with less restrictions. We need to do a better job of ensuring that we focus on increasing productivity on existing agricultural lands rather than continuing to clear new lands.

Why the Drive to Make Agricultural Intensification Sustainable Is so Important

As noted above, it’s also critical that we continue to work on the “sustainable” side of “sustainable intensification.” While increasing crop yields and livestock density is important for reducing the pressure to clear more habitat, TNC is also working around the world to achieve that in ways that also result in better environmental outcomes in terms of soil health, water use, and water quality. Even without the need to increase yields, agriculture has a long way to go before we can call it sustainable, as the scale of problems like the “dead zone” in the Gulf of Mexico (largely resulting from nutrient runoff from farms, Diaz and Rosenberg 2008) demonstrates.

It may seem like a lofty goal, but we know it is possible: a review of 198 sustainable agriculture projects in the developing world reported a mean relative yield increase of 79 percent, while also reducing pesticide use and increasing water use efficiency (Pretty et al. 2006).

What does this mean for the future? Several people have provided a vision for us to feed the world in sustainable ways (Jon Foley’s “Feeding the World” article in National Geographic is a good place to start), and there has been a lot of debate about which strategies are actually feasible.

The data tell us that we are capable of increasing food supply without a net expansion of agricultural lands, although again it is unclear how much of that intensification was achieved sustainably, and how much of the increase helped to address hunger and malnutrition (as opposed to fueling obesity in the developed world). It remains to be seen whether the increase in agricultural land in 2011 was a delayed response to the 2008 jump in food prices (meaning we will likely see more expansion as prices have remained relatively high), an anomaly, or the result of other factors.

While there remain plenty of challenges to solve going forward, and conversion to agriculture remains a major threat, the data show that we are finding ways to produce more on less land, and that is at least a start. As we improve our metrics of agricultural sustainability, it should be increasingly possible to track how sustainable this intensification actually is.

Jon Fisher is a spatial scientist for The Nature Conservancy. He has studied forestry, environmental biology, stream ecology, environmental engineering and how technology and spatial analysis can improve wildlife management at airports. His current work mostly revolves around spatial analysis, sustainability, and web mapping. This analysis originally appeared on Cool Green Science, the Nature Conservancy blog.