How Much Energy Will It Take?

We’ve been surprised at all the attention Todd’s new fridge has gotten recently—including comments saying the comparison against African per capita electricity consumption isn’t fair because many of those people don’t have refrigerators. Exactly our point!

Sparse grids and limited incomes make it hard to own or operate modern appliances, but plenty of Africans would consume a whole lot more energy if it was available. Regular rolling blackouts suggest that countries aren’t producing enough energy to meet current demand, let alone what would be necessary to achieve universal access by 2030 (possibly a post-2015 MDG).

So Africa definitely needs a lot more energy, but how much more? And will the White House’s new Power Africa initiative make a serious dent? It turns out answering these questions are no easy task. (Roger Pielke explains how estimating global energy demand is difficult and offers some jarring take-aways.)

Asking “how much energy production does Africa need to meet demand?” is not too different from asking “how much food should Africa grow to end hunger?” Any estimates require big assumptions about baseline data, undernourishment thresholds, nutrition gaps, average diet composition, availability of land, seeds, and fertilizer, seasonal growing periods, efficiency of distribution networks, spoilage rates, and so on. The result would be highly imprecise, but would provide some sense of the magnitude.

To estimate unmet energy demand, we made a series of assumptions using averages, conjectures, and imperfect data. On top of that, there are non-obvious conversions between power usage (measured as a rate over time) and energy capacity (the maximum electricity that can be produced or used at any one instant). Perhaps the most critical assumption concerns the definition of modern energy access (see a terrific essay on this question by Pielke and Morgan Bazilian). Does access mean being able to turn on two lightbulbs? A television? A fridge? What about an air conditioner? Is the goal to reach the IEA’s minimum “energy for all” threshold of 250 kWh/year, which is about the same as the average consumption in Bangladesh? Or is Tunisia a better model at 1260 kWh/yr? Or South Africa at 4800 kWh/yr? (Or, gulp, 13,395 kWh/yr for the average American?)

We’ve made an attempt at such an estimate here for current demand in the six countries targeted by President Obama’s new signature initiative, Power Africa. In each we use three different thresholds: the IEA’s minimum and the average consumption profiles for Tunisia and South Africa. (The full, nerdy explanation of the demand model is explained below.) Admittedly, it’s very, very rough, but the size of the gap is massive. 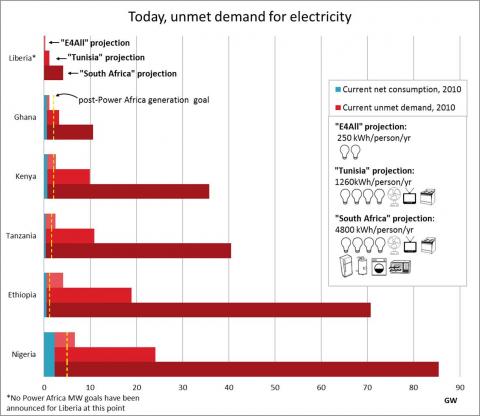 Here is the same projection for 2030, taking into account population growth and additional future demand. 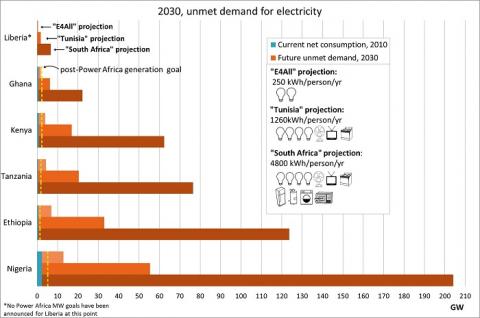 The figures, we hope, speak for themselves. Our immediate take-aways are:

The figures show the various amounts of energy required to satisfy demand at differing levels of consumption in each of the Power Africa countries. It compares the Energy for All (“E4All”) threshold of 250kWh per capita (which, as their minimum for rural areas, serves as a lower bound estimate) with the actual average consumption levels for Tunisia (1260 kWh per capita) and South Africa (4800 kWh per capita). This presents a distinct illustration of the disparity between the definitions of energy access. For example, under the “E4All” projection, an individual could only power two standard 60W light bulbs. Under the midrange “Tunisia” projection, an individual could power four light bulbs as well as a fan, TV, and electric stove. Finally, under the “South Africa” projection, an individual could power all that and also a standard refrigerator, 50L water heater, washing machine, and one AC window unit.

Net consumption was converted from kWh, as reported by the US EIA, to MW. This provides the estimated net MW utilized by each country in one year. The kWh to MW conversion follows the model used by the World Bank.

Current unmet demand refers to the MW required to extend the specified level of electricity consumption to the remainder of the population currently without access. The projection reflects an estimated load factor of 0.62, which is the average of load factors across several middle-income countries (Tunisia, South Africa, and Indonesia). The model also incorporates the IEA-recommended minimum 20% additional reserve capacity, in order to avoid load shedding. For example, for the Energy for All threshold level of 250 kWh/person, the unmet demand was calculated as follows:

Future unmet demand refers to the MW required to satisfy an increase in demand due to population growth on top of existing unmet demand. I.e., the additional electric capacity that is needed to provide the specified level of consumption for each person added to the population between 2010 and 2030 (using UN medium variant projections). Again, the model reflects a load factor of 0.62 and incorporates a 20% minimum reserve capacity. For example, again using the Energy for All threshold level of 250 kWh/person, the future unmet demand was calculated as follows:

Todd Moss is vice president for programs and senior fellow at the Center for Global Development. In addition to his institutional responsibilities, he directs The Emerging Africa Project and his work focuses on U.S.-Africa relations and financial issues facing sub-Saharan Africa, including policies that affect private investment, debt, and aid. This is a joint post with Madeleine Gleave. This post was originally published on the Center for Global Development blog.