Behind the Golden Rice Attack

Did you hear that a group of 400 angry farmers attacked and destroyed a field trial of genetically modified rice in the Philippines this month? That, it turns out, was a lie. The crop was actually destroyed by a small number of activists while farmers who had been bussed in to attend the event looked on in dismay.

The nature of the attack was widely misreported, from the New York Times to New Scientist to BBC News, based on false claims by the activists. But then anti-GMO activists often lie. In support of the vandals, Greenpeace has claimed that there are health concerns about the genetically modified rice. In fact there is no evidence of risk, and the destruction of this field trial could lead to needless deaths.

The rice is genetically enhanced to produce the vitamin A precursor beta-carotene, giving it a golden color. This vital nutrient is missing from the diets of millions of rice-dependent people in poor countries, where vitamin A deficiency leads to preventable blindness and death on a massive scale.

In an exclusive interview at IRRI in Los Baños, I spoke to the golden rice project senior manager Raul Boncodin, who personally witnessed the attack on the morning of Aug. 8.* IRRI also provided photos of the attack; this is the first time they have been seen outside of the Philippines.

Boncodin had traveled to the field site because the researchers had been expecting a rally and a dialogue with activists, he told me. A band of more than 50 split away from the main group of 300 to 400 protestors and broke down the fence around the golden rice plot. They trampled and uprooted the young rice plants across the entire plot. "You could see they were angry—it was a mob," Boncodin said. The local police were outnumbered and did not intervene. 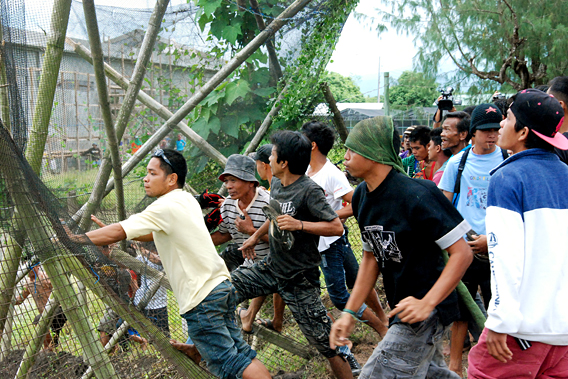 So who were these attackers? Did they look like farmers? "No," replied Boncodin. "Maybe two or three of them were farmers, but the rest of them were not real farmers. I could see that this was the first time they had stepped in mud or been to a farm. They were city boys, city girls. Two of them were even sporting dyed hair. ... Would you consider a farmer having dyed hair?"

There is additional evidence beyond the physical appearance of the activists. "Real farmers will not trash a living rice plant," said Boncodin, who is a native of the region where the vandalism took place. "They have this culture that it is unlucky to kill a living rice plant," even if plants are diseased and threaten to infect the rest of the crop.

This taboo on destroying green rice plants is widespread and even has a name: Bosung. Boncodin insists that the real farmers "stayed by the side, and didn't directly participate in the trashing of the trial site." When local people were informed, their reaction, he said, was that "no sane farmer would do that to a living rice plant."

When the news of the attack was related to local farmer leaders, they were aghast. According to Boncodin, one of them, a 50-year-old man, burst into tears at the thought that so many young rice plants had been destroyed.

The local office of the Department of Agriculture backs up this version of events. Their press statement also names names: "The surprise attack was staged by the group led by Wilfredo Marbella, deputy secretary of Kilusang Magbubukid ng Pilipinas (KMP) and Bert Auter, secretary general of KMP Bicol. Also identified were members of Anakpawis Partylist and MASIPAG."

So who are these groups? MASIPAG describes itself as a "farmer-led network of people's organizations." It has long been a mainstay of the anti-GMO scene in the Philippines and recently joined with Greenpeace in securing a court injunction against a genetically modified eggplant designed to reduce insecticide use.

KMP is an extreme-left organization that promotes a conspiracy theory that golden rice is being produced to facilitate a multinational takeover of the Filipino rice market. In reality, golden rice is being produced by public sector organizations and would be handed out free to farmers, who would be encouraged to save and replant seeds year after year with no technology fees or royalties. Such widespread, free distribution is central to the project’s plans for achieving its humanitarian goals.

The attack was rapidly condemned worldwide. A petition on the website change.org, written by a team of internationally renowned scientists, quickly gathered thousands of signatures. (You can add your name here.) Most of the signatories expressed moral outrage that the ideologues of the anti-GMO movement, including behemoths like Greenpeace, demonize golden rice despite its potential to prevent millions of premature deaths from vitamin A deficiency in the developing world.

Although some anti-GMO activists dismiss the public health problem of vitamin A deficiency to bolster their case, the medical community agrees that it is a major killer, comparable in scale to malaria, HIV/AIDS, or tuberculosis. The World Health Organization estimates that 250,000 to 500,000 children become blind each year because of a lack of vitamin A in their diets, and half of them die within 12 months.

Vitamin A deficiency also depresses the immune system, raising overall mortality from other causes such as diarrhea, measles, and pneumonia. For these diseases the additional toll is estimated at 1 million preventable deaths a year, or around 2,700 per day, mostly among children younger than 5.

Greenpeace, with its $335 million annual revenue, has nearly four times more funding than the entire International Rice Research Institute (most of whose work involves conventional plant breeding). Greenpeace has waged a decade-long campaign against golden rice because it involves transgenic technology. The scientists at IRRI insist that there was no other way to get genes for beta-carotene into rice.

Greenpeace's scaremongering includes the regular production of glossy reports spreading unscientific myths about golden rice. In China last year it successfully created a fake media scandal which landed some of the key Chinese project scientists in jail. Greenpeace Southeast Asia spokespeople took to the media to speak in support of the destruction of the golden rice trial in the Philippines.

The project's scientists are reluctant to battle Greenpeace directly over golden rice before results of their research come in. I didn't meet any experts at IRRI who claimed that their project would solve all or even a majority of the vitamin A deficiency problem worldwide. As the IRRI website makes clear, dietary diversification, capsule supplements, and food fortification are also important strategies. 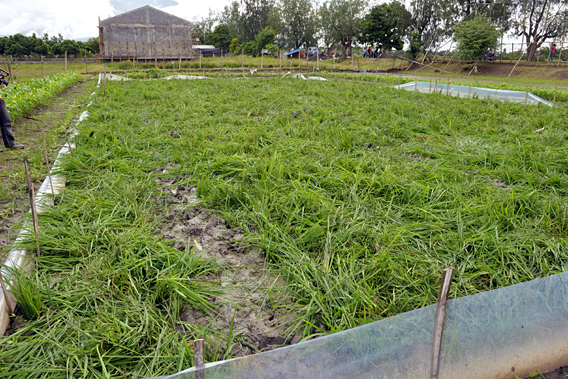 But these approaches have not worked on their own. Capsules need to be provided to children every three months, for example, presenting a major logistical challenge. Nina Fedoroff, former president of the American Association for the Advancement of Science, told me via email: "Golden rice addresses a major nutritional problem in the most direct way imaginable, through a dietary staple."

Opponents claim that golden rice is "poison," to quote from a statement by a KMP spokesman. Fedoroff replies: "There is absolutely no evidence, repeat no evidence, that modifying plants by molecular techniques is dangerous. There is no evidence that rice expressing a compound that lots of plants make is dangerous." (The compound, beta-carotene, is what makes carrots orange—hardly very scary.)

Vitamin A deficiency is a disease of poverty. Golden rice network coordinator Gerard Barry told me it exists, "because hundreds of millions of people have access to rice in their diets, but little else." There is universal agreement that a long-term solution can only come through eliminating extreme poverty, but in the meantime, large numbers of deaths can be prevented. As Barry says: "Millions of children are dying senselessly and needlessly from common childhood diseases because their immune system is compromised."

How far does the attack set back the golden rice development program? The test that was destroyed is one of five currently underway in the Philippines. The other four can still yield useful data—if they survive to the end of the season.

IRRI project leaders have met government officials to discuss what new work may be necessary after the attack to complete of the project's environmental release dossier. It is still unclear whether the trial will need to be repeated. If so, then golden rice will be delayed for many months, or even longer if more vandalism is done or if the anti-GMO activists find other strategies to hamper and delay the scientists' work.

I asked Boncodin how he felt about the attack on his and his colleagues' potentially life-saving work. "It wasn't anger, it was more like a sense of loss. And grief for my fellow Biccolanos [natives of Bicol province]," Boncodin said. "Everyone shed a few tears."

The simple question now is this: If anti-GMO campaigners do manage to delay the launch of golden rice, how many more children will die? If all goes as planned—and if the activists stop trying to block the project—the life-saving rice could be made available within as little as two years in the Philippines, and soon after in Bangladesh and Indonesia.

Additional deaths resulting from further delay of the launch of golden rice will not be random; they will be largely restricted to children younger than 5—some of the poorest and most vulnerable young people in the world. The future success of the anti-GMO movement will be written on the gravestones of these children, who will die painfully but out of sight in remote poverty-stricken communities across South and East Asia.

Unlike some I am not accusing Greenpeace and its ideological allies in the Philippines of committing a crime against humanity. Not yet, at any rate.


Mark Lynas is an environmental writer based in the United Kingdom. He is author of The God Species and winner of the 2012 Breakthrough Paradigm Award. This article is reprinted with permission from the author, and originally appeared on the Slate blog Future Tense.