Pastureland is by far the single largest human land use on the planet. Globally, we use twice as much land for producing meat and milk from cattle and other ruminants as we do for growing crops.

For centuries, global pasture area expanded, with severe environmental consequences. Since the 1700s, an area nearly the size of North America has been converted to pasture. Further, pasture expansion has been a major driver of deforestation in the Amazon and degradation of many of the world’s natural grasslands, threatening biodiversity and worsening climate change.

In the past 20 years, however, something remarkable has occurred, something that few predicted: global pasture has begun to decline. According to data from the Food and Agriculture Organization of the United Nations, there are 140 million fewer hectares of pasture today than there were in 2000, an area roughly the size of Peru.

Many high-income countries saw pasture area peak as early as the 1960s and decline consistently since then. But in the past two decades, this pattern has spread to most of the rest of the world, with more than two-thirds of all countries now experiencing flat or declining pasture area. Notably, since 2000, pasture has also leveled off in the rapidly developing middle-income countries that saw the greatest pasture expansion in the late 20th century, including China and Brazil, as well as in low-income countries.

Pastureland is by far the single largest human land use on the planet.

Pasture’s decline could be a boon for the environment, especially if it continues, but the future is by no means certain. One factor in particular threatens to reverse pasture’s contraction. Rapid population and economic growth in parts of the developing world, especially SSA, in combination with persistently low animal yields, could herald a major expansion of pasture. Although economic development will probably drive productivity improvements along with demand, it is likely that SSA will experience a period of substantial pasture expansion as long as yields fail to keep pace with demand, following the pattern of other developing regions.

To a great extent, then, the future of global pasture — whether it continues contracting or expands once again — hinges on whether the livestock revolution comes to the developing world, and to SSA in particular. 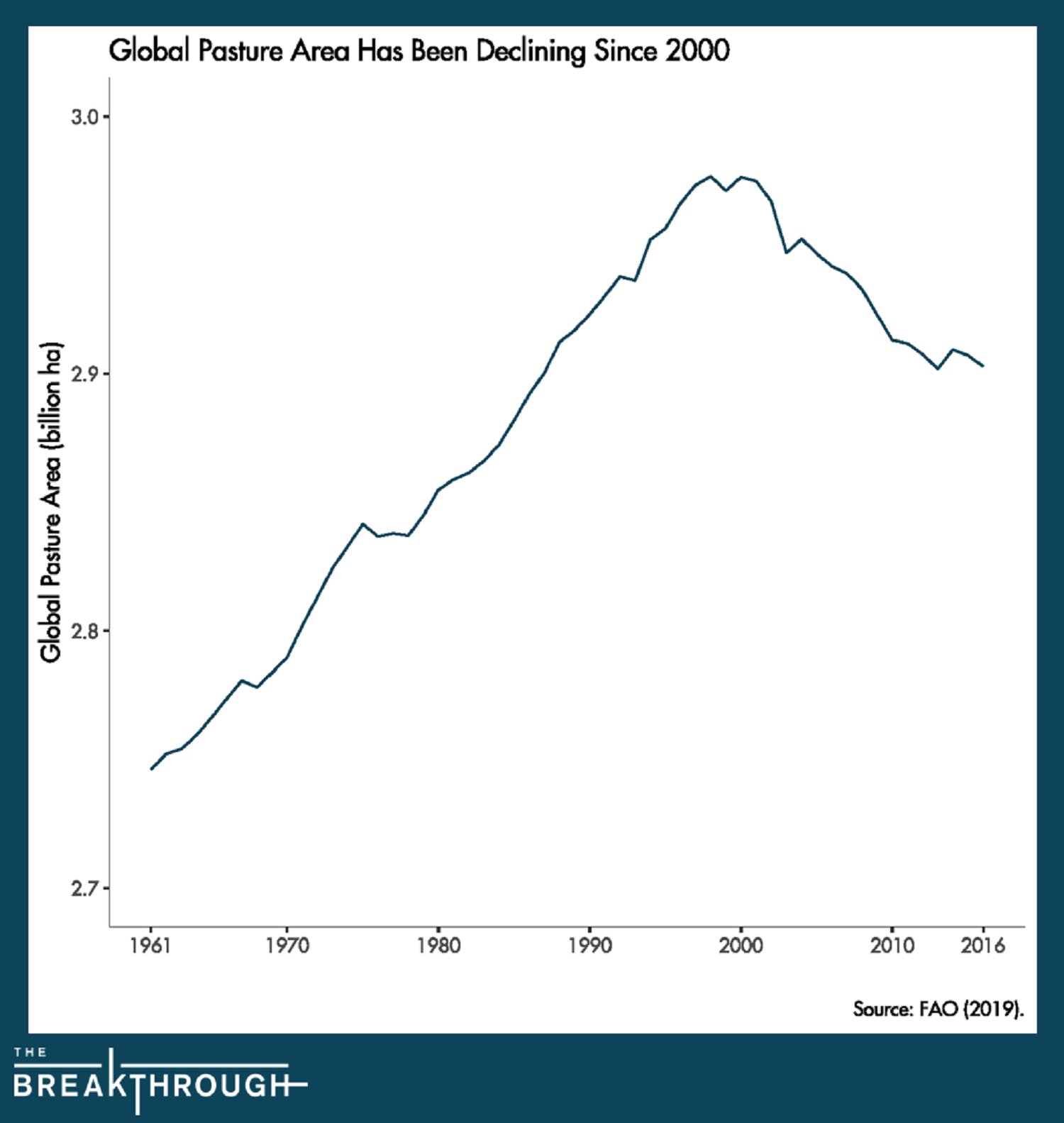 Addressing the problem from the demand side by reducing food waste and meat consumption has clear potential. But given how much demand is projected to increase, especially in the developing world, demand-side efforts will not be sufficient to keep pasture growth at bay. The good news is that productivity could be improved substantially — enough to offset increases in demand. Many developing regions today operate well below their technical potential, and there are plentiful examples of countries vastly increasing their productivity over short periods of time.

As it has elsewhere, increasing productivity in the developing world will require intensification — more inputs, more intensive management, and in many cases, larger-scale operations.

Of course, while increasing productivity is an important objective for reducing land-use change, it is one of many possible social, economic, cultural, and environmental goals, and intensification efforts should respect the integral role of livestock in the lives, livelihoods, and cultures of local communities.

There are three primary levers for raising productivity: better feed, optimized breeds, and improved animal health. Ensuring that animals receive an energy-rich and nutritionally balanced diet is essential for improving animal yields, and higher productivity of forage grasses as well as supplemental crop-based feeds means that more feed can be grown on less land. Cattle can also be bred to be higher-yielding and better adapted to regional conditions. Finally, protecting animals’ health and welfare makes them more productive.

Spreading the livestock revolution entails systemic change to regions’ production systems and requires overcoming barriers to the adoption of new practices. And due in part to the possibility of rebound effects, the environmental benefits of intensification at local levels are not guaranteed. Targeted efforts by the public and private sector are therefore needed to both incentivize intensification and fulfill its environmental potential.

James McNamara is a conservation scientist. He was a Conservation Analyst at Breakthrough.

Kenton de Kirby was a Senior Energy Analyst at Breakthrough.

The Future of Food