Climate Pragmatism, a new policy report released July 26th by the Hartwell group, details an innovative strategy to restart global climate efforts after the collapse of the United Nations Framework Convention on Climate Change (UNFCCC) process. This pragmatic strategy centers on efforts to accelerate energy innovation, build resilience to extreme weather, and pursue no regrets pollution reduction measures -- three efforts that each have their own diverse justifications independent of their benefits for climate mitigation and adaptation. As such, Climate Pragmatism offers a framework for renewed American leadership on climate change that's effectiveness, paradoxically, does not depend on any agreement about climate science or the risks posed by uncontrolled greenhouse gases.

The new report brings the Hartwell framework into an American perspective, and it is authored by a broad group of 14 international scholars and analysts representing a diverse range of political and ideological positions -- from the conservative American Enterprise Institute to moderate Democratic think tank Third Way and the liberal Breakthrough Institute.

Climate Pragmatism is the third paper released by the Hartwell group, an informal international network of scholars and analysts dedicated to innovative strategies that uplift human dignity through mitigation of climate risk, enhancement of disaster resilience, improvement of public health, and the provision of universal energy access. Previous publications include The Hartwell Paper (May 2010) and How to Get Climate Policy Back on Course (July 2009).

Climate Pragmatism also builds on the limited and direct energy technology innovation strategy outlined by the Breakthrough Institute along with scholars at the American Enterprise Institute and Brookings Institution in the October 2010 policy report, Post-Partisan Power.

As the report's authors explain:

The old climate framework failed because it would have imposed substantial costs associated with climate mitigation policies on developed nations today in exchange for climate benefits far off in the future -- benefits whose attributes, magnitude, timing, and distribution are not knowable with certainty. Since they risked slowing economic growth in many emerging economies, efforts to extend the Kyoto-style UNFCCC framework to developing nations predictably deadlocked as well.

The new framework now emerging will succeed to the degree to which it prioritizes agreements that promise near-term economic, geopolitical, and environmental benefits to political economies around the world, while simultaneously reducing climate forcings, developing clean and affordable energy technologies, and improving societal resilience to climate impacts. This new approach recognizes that continually deadlocked international negotiations and failed domestic policy proposals bring no climate benefit at all. It accepts that only sustained effort to build momentum through politically feasible forms of action will lead to accelerated decarbonization. 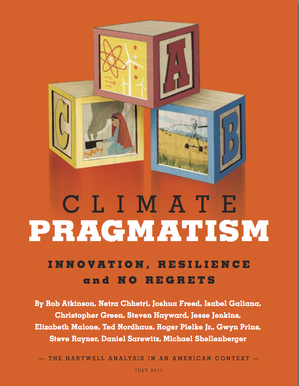 The report's authors are:

Choose one of the following options to download and view the full report:

For selected media and reactions to the report, see:

The introduction of the report is reprinted below.

Future historians of efforts to address climate change will almost certainly look back on 2010 as the end of one era and the beginning of another. The first began with the creation of the United Nations Framework Convention on Climate Change (UNFCCC) in Rio de Janeiro in 1992 and ended with the negotiation of the Copenhagen Accord in December 2009. By the Cancún talks in late 2010, the emphasis of international negotiations had shifted from efforts to establish legally binding emissions limits to more modest agreements to invest in new energy technology, transfer technology among nations, and support climate resilience efforts in the developing world.

If efforts in this direction are redoubled, this shift of priorities could redeem international climate cooperation. What's more, as the old framework has collapsed, new American leadership to address global energy, economic, and environmental challenges also becomes possible. In recognition of this reality, a group of scholars and analysts recently convened in Washington, DC to discuss the potential for renewed American engagement on climate change and the development of a strategy that's effectiveness, paradoxically, would not depend on any agreement about climate science and the risks posed by uncontrolled green- house gas emissions. Climate Pragmatism is the result of that meeting and is co-authored by several of the same scholars who produced The Hartwell Paper.

The old climate framework failed because it would have imposed substantial costs associated with climate mitigation policies on developed nations today in exchange for climate benefits far off in the future -- benefits whose attributes, magnitude, timing, and distribution are not knowable with certainty. Since they risked slowing economic growth in many emerging economies, efforts to extend the Kyoto-style UNFCCC framework to developing nations predictably deadlocked as well.

The new framework now emerging will succeed to the degree to which it prioritizes agreements that promise near-term economic, geopolitical, and environmental benefits to politi- cal economies around the world, while simultaneously reducing climate forcings, developing clean and affordable energy technologies, and improving societal resilience to climate impacts. This new approach recognizes that continually deadlocked international negotiations and failed domestic policy proposals bring no climate benefit at all. It accepts that only sustained effort to build momentum through politically feasible forms of action will lead to accelerated decarbonization.

If this new era is to be led at all, it will be led primarily by example, not global treaty. The Copenhagen Accord is one of essentially voluntary actions among major emitters. The accord perpetuates the conceit that international negotiations will ultimately include legally binding emissions reduction targets, but in reality, the emissions targets will be unen- forceable and thus constitute aspirational goals, not binding limits. That reality became ever clearer at UNFCCC negotiations in Cancún in December 2010. The substantive parts of the Copenhagen Accord are the new multilateral agreements to invest in new energy technology, slow deforestation, and build disaster resilience -- far better grounds for global cooperation than unenforceable emissions targets and timetables.

A new climate strategy should take a page from one of America's greatest homegrown traditions -- pragmatism -- which values pluralism over universalism, flexibility over rigidity, and practical results over utopian ideals. Where the UNFCCC imagined it could motivate nations to cooperatively enforce top-down emissions reductions with mathematical precision, US policymakers should acknowledge that today's global, social, and ecological systems are too messy, open, and complicated to be governed in this way. Whereas the UNFCCC attempted to create new systems of global governance, a pragmatic approach would build upon established, successful institutions and proven approaches. Where the old climate policy regime tried to discipline a wildly diverse set of policies under a single global treaty, the new era must allow these policies and measures to stand--and evolve--independently and according to their own logic and merits. And where the old regime required that everyone band together around the same core motivation and goals, policy- makers today are likely to make the most progress to the degree that they refrain from centrally justifying energy innovation, resilience to extreme weather, and pollution reduction as "climate policy."

Energy innovation, resilience to extreme weather, and no regrets pollution reduction -- each of these goals has its own diverse justifications:

Globally, almost all of the important action occurring on energy innovation and adoption has occurred and is occurring in support of one or more of this diverse set of reasons, not just climate change. The only two countries in the world to have significantly decarbonized their energy sectors over recent decades, Sweden and France, did so in response to oil shocks, not environmental fears. Last fall, the Indian government imposed a small fee on coal consumption, not for climate mitigation, but to fund advanced energy development to meet future energy needs. In October 2011, the Japanese government plans to begin gradual tax increases on coal, oil, and natural gas, fuels the nation lacks in any abundance, in order to raise an estimated $3 billion (¥240 billion) annually by 2015 to fund the development and adoption of advanced energy technologies. When fully phased in, the fossil energy tax will amount to just 3.6 cents per gallon of gasoline (¥0.76 per liter).

Likewise, efforts are ongoing from the Netherlands and Japan to the Maldives and India to build greater resilience to the vagaries of nature, including better infrastructure, emergency planning, and resilient design of everything from sea walls and skyscrapers to food crops. Meanwhile, the development of crops that are resilient to climate stresses, such as drought, has proceeded irrespective of specific predictions of anthropogenic warming impacts, and nations continually pursue cost effective improvements in public health and environmental quality.

For the United States and other nations to effectively pursue energy innovation, resilience to extreme weather, and pollution reduction, policymakers must make a clean break from the pitched and polarizing climate wars of the last twenty years and embrace a more pluralistic and pragmatic approach. Already, the international community is moving in the right direction. In mid-January, UN Secretary General Ban Ki-Moon announced that the focus of his efforts would shift away from climate and toward accelerating the development and deployment of clean energy, especially in the developing world. China presses ahead with the deployment of new, low-carbon energy technologies to enhance security of supply, improve public health conditions, and build a profitable new domestic manufacturing sector. And President Barack Obama's 2011 State of the Union Address focused squarely on energy innovation in the context of economic renewal and competitiveness, rather than climate change.

Read a statement from the Founders of Breakthrough, Michael Shellenberger and Ted Nordhaus, on "Climate Pragmatism".

Dan Sarewitz is Co-Director, Consortium for Science, Policy & Outcomes, and Professor of Science and Society at Arizona State University.

Steve Rayner was the James Martin Professor of Science and Civilization at the University of Oxford, where he was the Founding Director of the Institute for Science, Innovation and Society.